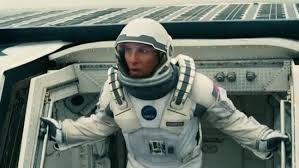 Christopher Nolan is a one-of-a-kind cinematic talent who has directed four of the best reviewed blockbusters of all time (the Dark Knight trilogy, Inception), the micro-budget film against which other micro-budget films are measured (Following), the hyper-twisty lost memory thriller, Memento, a celebration of magic and electricity, The Prestige, and a starry (Al Pacino-Hilary Swank-Robin Williams) remake of a Nordic thriller, Insomnia, which gave Warner Bros the confidence to entrust him with Batman Begins. He combines high concept with high IQ, but even at his most cerebral knows how to keep an audience hooked. Following the dictum that audiences would rather be confused than bored, he invites them down the rabbit hole, intrigues them, gives them spectacle and lets them reach the other side wowed and feeling just a little bit smarter.

Interstellar is a big dumb movie masquerading as a clever one. It contains lines of dialogue (or propositions) so jaw-droppingly banal that one can scarcely believe they were typed on a word processor, much less spoken by actors of the calibre of Matthew McConaughey.

The film is best understood as an apocalyptic end of the world movie without religion, or if you prefer Nolan does M Night Shyamalan. A blight is taking out crops (note: what happened to greenhouses?) and threatens mankind with extinction. Class textbooks are re-written so that human endeavour is given a positive spin. Nolan’s vision of the future is mid-western in conception. There are still farms but engineering has failed. There is very little racial diversity. Like the characters in Joe Dante’s Explorers, pilot-turned-farmer Coop (McConaughey) is sent co-ordinates in Morse code that lead him to a facility in the middle of a desert. When we see the actor William Devane (of 24 fame) we think we are in the President’s hideout. Actually, it’s NASA. Coop joins three scientists for a journey through a black hole to visit three planets mapped out by previous missions, one of which may represent a home for a future human colony. (Their spaceship holds fertilised human embryos for the purpose of repopulation – but who is going to raise them?)

The plot is almost a McGuffin. Once they find a habitable planet, they have to get back. Then there is the small matter of getting the rest of mankind on a spaceship and deciding who goes and who stays. I’m sure we have had that dilemma explored in a Roland Emmerich movie, 2012. But it does contain an absorbing set piece in which the crew have to decide whether they are going to visit one planet knowing that to enter its atmosphere, they will experience time differently – one hour on the planet equals several years back on Earth. (‘Time is a resource, like fuel,’ remarks one character.) The four-person crew make very unscientific decisions based on available hooey, determining which planet to visit first, on the evidence, for example, that the signal is better. Surely these decisions would have been planned in advance. But if we don’t see the crew, which includes Anne Hathaway as Brand, the daughter of a physicist (Michael Caine) making these decisions in flight, where’s the drama?

On one level, the film creates a space (according to the dialogue) where ‘good and evil don’t exist’. This is Nolan’s way of saying, when people find themselves fighting for survival alone against something environmental and not of their making they are neither good nor bad. This assumes they work together as a team. As we find out at the 100 minute point of a 169 minute movie, a wild card is thrown into the mix, with a plot development that owes something to Event Horizon.

Interstellar is a film about broken promises between fathers and daughters. Coop leaves his daughter, Murph (Mackenzie Foy) and she doesn’t forgive him. She tells him to stay – she receives a message to this effect – but Coop wants to do what is right and to put his skills to the best possible use.

So how bad does the film get? A character, Mann (played by a leading Hollywood actor whose voice I swore I heard early on) represents the fall of man, exhibiting a survival instinct at the expense of others. There is a lot in this film about institutions making decisions that individuals cannot make because self-interest only goes so far. That is ‘intelligent’ enough. But when dialogue refers to first gravity, then love travelling through wormholes, as if love is a transcendent element, an odour like perfume that can be transmitted and received across the expanse of space, then the film truly lost me. Characters can say something really fast like it is a proven proposition, but that doesn’t mean that I or general audiences believe it.

Nolan has been accused of exhibiting a lack of humour. He addresses this by featuring robots, one called TARS, the other CASE, with humour settings. We learn, for example, that a 60% humour setting produces knock-knock jokes. 20% presumably produces Seth Rogen. It is the voice of one of these robots that suggested the famous Hollywood actor alluded to above.

On the scale of bonkers ideas, the climax of the film is up to eleven. We learn who exactly sent Coop the coordinates. It might look great in IMAX but the idea that the facility in which one of the characters finds themselves is man-made simply beggared belief. For me it symbolised (at best) the notion that science could finally replace religion; that human technology could become so sophisticated that it is the only belief system that matters. It is possible to accept that idea; after all comparatively few of its users understand the science that makes mobile phones work. But as I watched this conceit I wondered what would motivate endangered humankind to make the facility that we are shown? No sensible answer was available.

In the final scenes, we see an altered perspective, homage to the ‘folded landscape’ shown in Inception. I had the overwhelming feeling that Nolan, in referencing his past work and fashioning a narrative that was like a Moebius strip, had run out of ideas. Nolan doesn’t deal in religion or notions that conflict with his own. His film isn’t science fiction - it is science kitsch, limited in its frame of reference. McConaughey and the rest of the cast keep our interest and there are good science touches – like no sound being heard in space – that suggest that Interstellar, at its best, is a corrective to bad science fantasy. But it isn’t corrective enough.

Pictured: Molly (Mindy Kaling)answers questions about being a 'diversity hire' in front of her new b…