The Cebuano taste bud is a mixture of different colonization and cultural immersion due to different nationalities who came to the islands, eventually influencing the Cebuanos. But aside from that, the Cebuanos or the Filipinos, in general, are very agile in terms of adapting foreign cuisine into our native cooking.

Today’s blog is all about the Filipino or more specifically Cebuano comfort food which can be found in every local household and also at several street corners of downtown Cebu City. 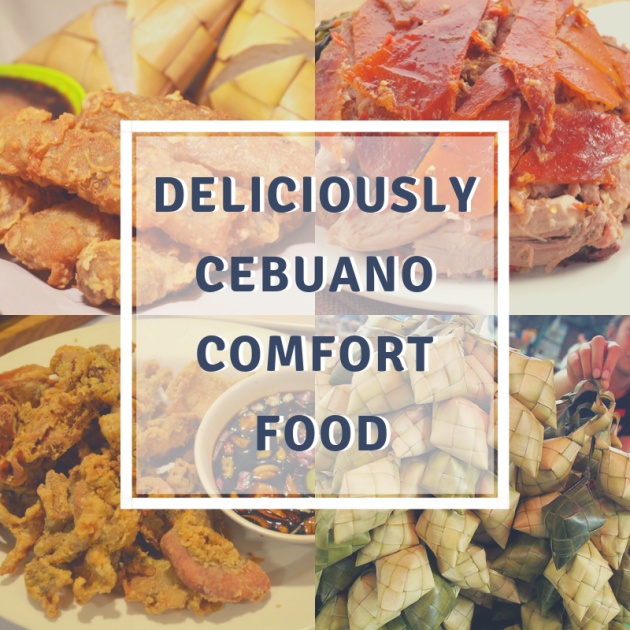 I thought of writing this because of earlier today due to the fact that my husband James was craving for some Lechon and I don’t want him to eat one today as I am on a strict diet. Of course, if he’s going out to eat, I will be coming with him too and that means temptation.

So, I looked for other Cebuano food favorites and here’s my own list.

In English, it’s Hanging Rice. It’s called Puso because of how the container made of coconut leaves are formed, it looked like a heart, Puso is a Tagalog term for the heart.

Cebuanos cook rice in this way for efficiency and for the rice not to spoil easily. It has been noticed that when cooking rice in such way, the cooked rice won’t spoil until the next day while when cooked the traditional way, it has a tendency of spoiling in just hours.

Almost every meal at the streets, Puso are hanged on stands. To open it, the customer has to cut it into two, most of the time, the outer side of the rice becomes green in color too because of the coconut leaves.

Best eaten at night or when the weather is cold and rainy. Larang is a fish soup recipe which has a kick to it because of the chilis and other spicy ingredients added. It is like the Tula or the traditional fish soup except that this has its own type of fish to be cooked as such.

Normally, in the streets of Cebu, if there are vendors and small stands with huge pots boiling and steaming hot, you can assume they are cooking Larang.

This viand is also pretty affordable, usually, it can be served in less than Php 50-100. I always order this too when eating out in a restaurant when we have errands to do outside the house.

Because of its spiciness, most of the diners will be sweaty and the coldness is relieved.

I have featured several restaurants in Cebu which are offering this type of food. SuTuKil means Su for sugba or grill, Tu is for Tula or Tuwa or in English, fish soup while Kil is for kinilaw or ceviche.

This is very popular in Cebu and it is not just a hit for the Cebuanos, most visitors and foreigners would also order this when on the beach or even in restaurants. But while there are restaurants which are hitting the right taste for the three, it is also a hit and miss for many. So, it is very important to know which restaurants have the best of the three worlds.

This is from the Chinese but most Cebuanos are into this almost vegetarian food as it is mainly made of young bamboo. Ngohiong was introduced to me by a college friend when we had our seminar back before college days started and she brought me to a cheap eatery, a piece of Ngohiong at that time was just priced at Php 5. Today, the pricing had increased for most vendors but the taste is still the same.

Our favorite Ngohiong provider is, of course, Ngohiong Express and one which is located in San Carlos University as it comes with a very tasty sauce, I do strongly believe that its the sauce that is making the Ngohiong taste good.

Also, I would like to note that the Chinese community in Cebu is located in Parian, this area is now becoming a heritage spot as most of the Chinese families had already moved to several other parts of the city. It is here where the favorite Casa Gorordo is located and the Yap-Santiago Ancestral House. 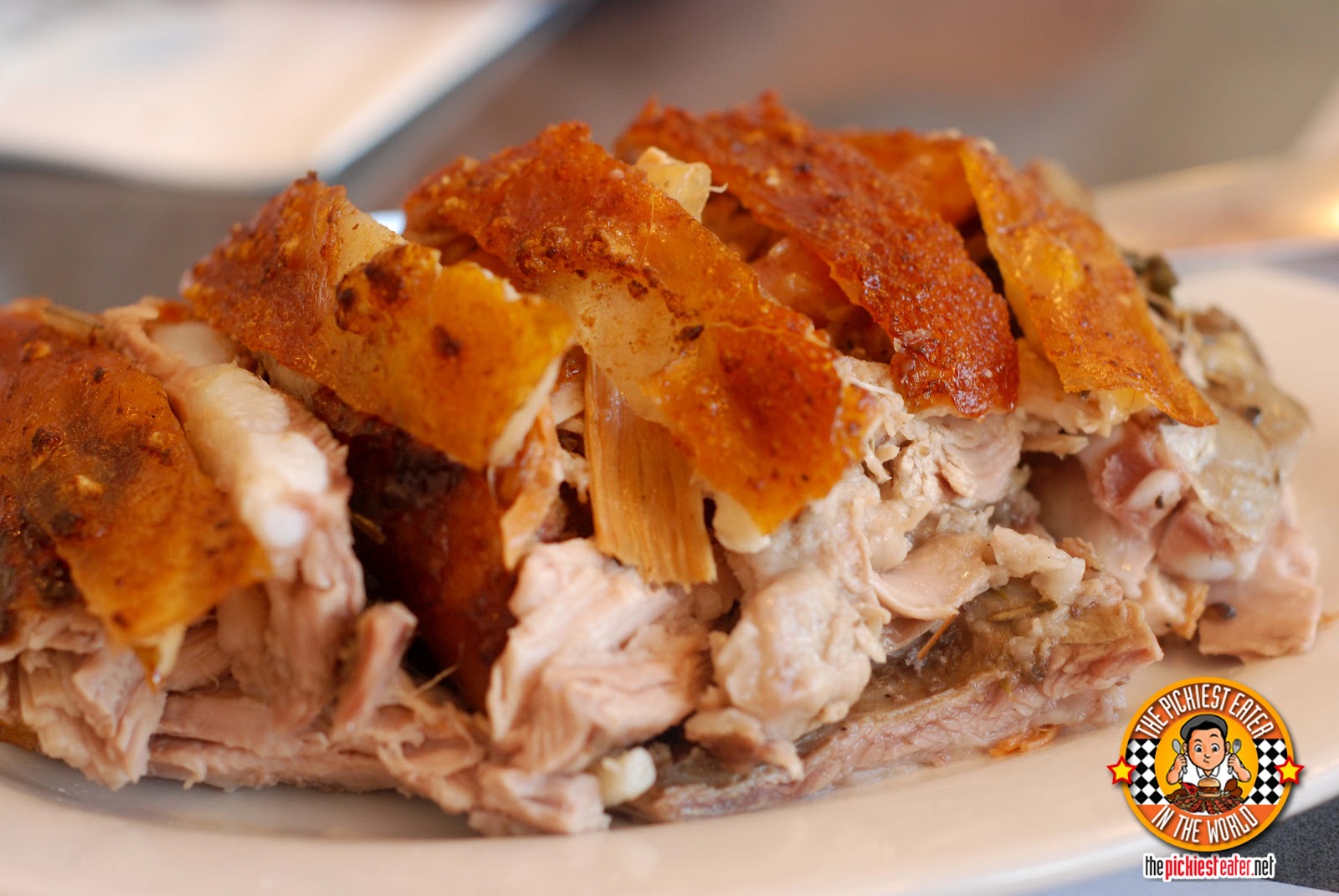 Who could resist Lechon? I have blogged about this before with the title World of Lechon in Cebu and it is still a top favorite. While it was only a royalty food before and which is only eaten during huge celebrations like birthdays or weddings, it has now become a daily craving for Cebuanos.

There are Lechon everywhere, in mall food courts, random restaurants, and buffets, even on the streets as well as the airports. It has become widely popular that Cebuano business owners had the idea of freezing the Lechon parts and sell them for those who would like to bring home Cebu Lechon to their respective families, this explains why there’s a Lechon vendor in the airport!

Lechon is a whole roasted pig. The pig is cleaned up from the outside to the inside, its internals is also taken out and will be used to also cook a different dish. The pig is roasted over charcoal for hours. It’s a very tedious way of cooking but the results are always satisfying.

Today, there are many choices and flavors too like spicy ones, boneless and many more. Most of the diners would request the skin because that’s where the flavor is.

Although this may seem delicious, it is also a possible food that is taking part in why there are many obese Cebuanos nowadays.

Cebuanos don't want to throw away certain parts of a bull, that would be a waste so the perfect way of utilizing that is cooking it too! But this is not really a Cebuano original, it came from the Chinese, they are very well known for their prudent character.

You'll be surprised that this dish is made of chopped bull testicles and genitalia or penis, this is considered an exotic food in the city and is usually cooked in a large cauldron and is very sought out by locals.

Although I have not tasted one yet, I do believe that many or shall I say the majority of the Cebuanos love this dish, it is also the reason why they will never go absent in street carenderias or eateries.

I bet this dish can be found in several parts of the country, but Cebuanos claim that this Balbacua dish is a Cebuano-original. Again, to save all the parts of an animal when cooking, even the tails have to be utilized.

Balbacua is another soup dish, oily, gelatinous, super tender and not so healthy but Cebuanos love them. It is cooked with lots of ginger, garlic, onions, salted peanut, star anise, and salted beans. Just like the rest of the soups, cooking it is straightforward but requires a long time of tenderizing most especially that this is mostly made of skin.

I found as well during my research that Balbacua was derived from the Spanish term "barbacoa," which means to cook meat very slowly on an open fire.

In the Northern Philippines, this is referred to as "Chicharong Bulaklak" but in Cebu, we call it Ginabot, sounds robotic right? Well, it is very popular here in Cebu, it won't be absent in any street food eatery and it is usually eaten together with Puso and some cold soda to go with it too.

Ginabot is actually deep fried pig intestines. The intestines are cleaned, boiled and then deep-fried that makes it look like flowers when cooked. It is very crispy and somehow best eaten with friends along low seating benches at the sidewalks.

Most of the college students and even the laborers eat this on the street sidewalk, it comes with a tasty sauce made of vinegar or soy sauce with lots of onions and calamansi which makes it taste better.

Grilled or fried, Cebuanos love their Chorizos. Obviously, this came from the Spaniards who had colonized the country for more than 200 years.

There are several types of Chorizos, there are spicy ones, regular and special types. Most are being sold in dozens and are sought out by those who are bringing them as "pasalubongs" to their loved ones who are now in other countries or other provinces.

There's a very typical way of cooking this and it doesn't require oil but instead water over medium heat. Oil is not needed as the Chorizo itself becomes oily once the skin pops open. The caramelized Chorizo is what every Cebuano desires.

This dish is a favorite for breakfast and even on evening street food adventures.

Pretty sure there are still other Cebuano comfort food and dishes which I have not included in the list. I knew that because I am not a pure breed Cebuano, I am a natural born Boholana and the list was only made out of my personal experience living in this city for more than a decade and inputs from my husband.

How about you? Do you have any comfort food from your local country or where you are based right now? Would you mind sharing them on the comment below?

Thank you for reading!  Participate in this Querlo about Filipino Food: