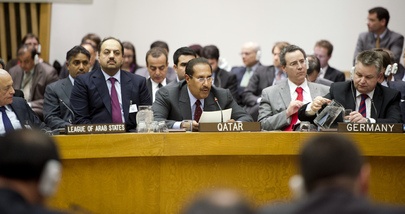 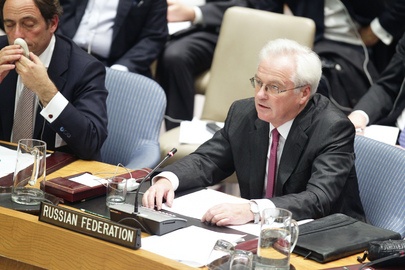 Did Russia Ambassador Churkin threaten Qatar’s PM/FM Al-Thani? Commenting on reports that he threatened the prime minister of Qatar during negotiations leading up to Saturday’s double veto by Russia and China on Syria, Russian Ambassador Vitaly Churkin said: "It's just, uh, uh, dishonest and, and dirty and provocative, of course. Also, I should tell you that our discussions were centred exclusively on the draft resolution we were working on and focused on the situation in Syria." Have Negotiated With Ambassador Churkin & Old Ally Qatar PM/FM Al-Thani: I too have been in grave negotiations in a small room with Ambassador Churkin. At the “London Conference” in 1992, discussions with the Russia’s Special Envoy on the Balkans became more animated, but not more. Ambassador Churkin though did impress upon me his willingness to go that one extra step to assert Moscow’s will. Qatar’s Prime Minister/Foreign Minister Hamad bin Jassim bin Jabr Al-Thani and Chairman of Arab League Foreign Minister’s Council is also an old colleague. He is understated in his diplomatic style, but during last week’s debate in the UN Security Council it was evident that he was intent on making a point with respect to “Syria’s Assad regime and those opposing the Arab League initiative for Syria. Threats & Fists or Just Beyond Diplomatic Tone & Substance: Ambassador Churkin though continued to explain that he attended three meetings with Qatar’s prime minister and those “discussions were centered exclusively on the draft resolution we were working on and focused on the situation in Syria." Calling a press conference after the Russian Mission to the UN was inundated with calls for comment, Churkin denied the allegations circulating online that he responded to a warning by Qatar’s prime minister not to veto the resolution with “threats.” “Apparently somebody is trying very hard in order to drive a wedge between Russia and the Arab World,” Churkin said, adding that those rumors validated his government’s concern that its veto would be used “artificially to try to poison our relations with the Arab World.” Looking to Reassert Russia Influence: Expressing regret over Saturday’s (February 2, 2012) veto, he suggested that the resolution might have passed if “we worked for two or three more days.” Clearly Churkin was upset that his Foreign Minister Sergey Lavrov’s “initiative” to Moscow was being effectively preempted and made irrelevant. This is something we already anticipated and wrote about last week as well. Read our Article - diplomaticallyincorrect.org/films/blog_post/moscow-flies-in-to-save-damascus-assad/45323 Ambassador Churkin has in the past been perceived as going over the top. He has been one of most emphatic champions of a re-assertive Russia. It was my perception in 1992 that Ambassador Churkin viewed Russian nationalism as a vehicle to upward mobility – although he has perhaps overplayed that on at least 2 occasions in context of conflict in the former Yugoslavia. Not Your Uncle’s Arab League! Regardless of what happened behind closed doors and the diplomatic MMA, there is little doubt though that Moscow has suffered a big loss in friendships and image in the Arab World. Ambassador Churkin tried to reassert Moscow’s influence, and regardless of rights/wrongs of urging, things have changed not only in terms of Russia’s capacity to do anything more than block, but also within the psychology and institutions of the Arab World. “We hope that the Arab League will continue its activity. We hope that the monitoring mission will be deployed again. So, uh, these are the things I think, as a first priority, we are looking to. And of course that everybody in Syria exercise restrain in this situation. The violence must stop from all sides as we have repeatedly emphasized.” It is evident that under its new Secretary General Nabil ElAraby as well as PM/FM Al Thani, this is no longer your uncle’s Arab League nor is it the same Arab World as during the period of the Soviet Union. UN Photos: The Two Corners: - Qatar & Russia! Also Read – “Veto of Syria Resolution Portends Seismic Shifts” - diplomaticallyincorrect.org/films/blog_post/veto-of-syria-resolution-portends-seismic-shifts/45222 Ambassador Muhamed Sacirbey - FOLLOW mo @MuhamedSacirbey Facebook-Become a Fan at “Diplomatically Incorrect”       Twitter – Follow us at DiplomaticallyX

What are you say? i every day will send photo tatto?

Blue Whale Game is a Challenge?