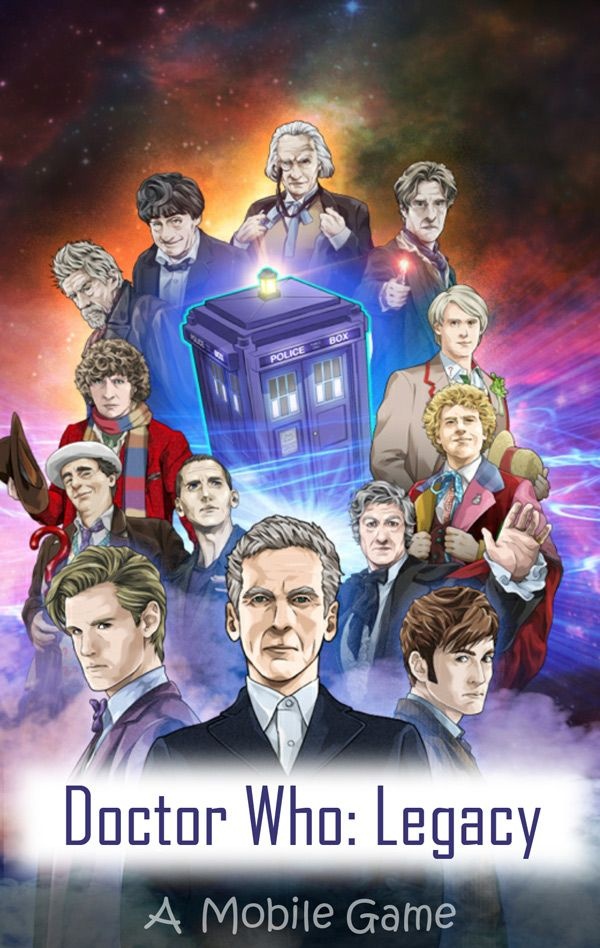 After Harry Potter: Hogwarts Mystery (which, by the way, has been improving lately), here's another game that I've been playing, albeit on an on-off basis: Doctor Who: Legacy. I discovered it last year, while I was travelling in the USA and looking for a free game to play at the hotel. Being an old Doctor Who fan as well, this was a no-brainer. Since then, even though I haven't played every day, I still regularly open the app to solve a puzzle or two.

Doctor Who: Legacy is a puzzle game that combines a Tetris-like approach with a story based, of course, on the BBC show Doctor Who.

The story itself involves travelling with the Doctor (most of the time) and a team of 5 companions (most of the time), in order to unravel a huge mystery starting with a Sontaran conspiracy, but whose ramifications look much more complex, and that is likely to rend the very fabric of space and time. While "travelling", you'll meet old friends whom, once recruited, you can add to your party at will. In the same way, you'll find many old enemies in your way as well.

You don't have to care about the story to play. Its impact is for flavouring, with a few dialogue lines at the beginning of some games, and when it imposes specific companions for a given chapter. Still, it's nice having a narrative to follow. 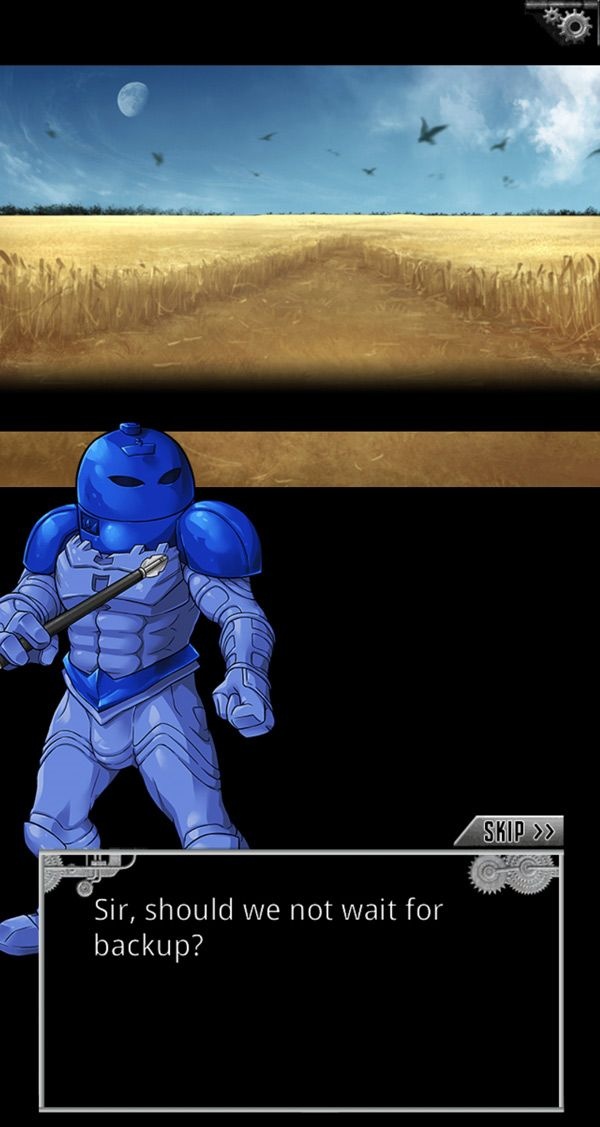 The game is divided into four chapters (as far as I could see), each with plenty of levels to play, and a "fan" area with additional, themed levels. Each of those has a different difficulty. The storyline's difficulty gets gradually harder, so you have to choose a team whose overall level is high enough for a specific playing field. As for the fan area, the difficulty is indicated for some levels, which lets you plan ahead. 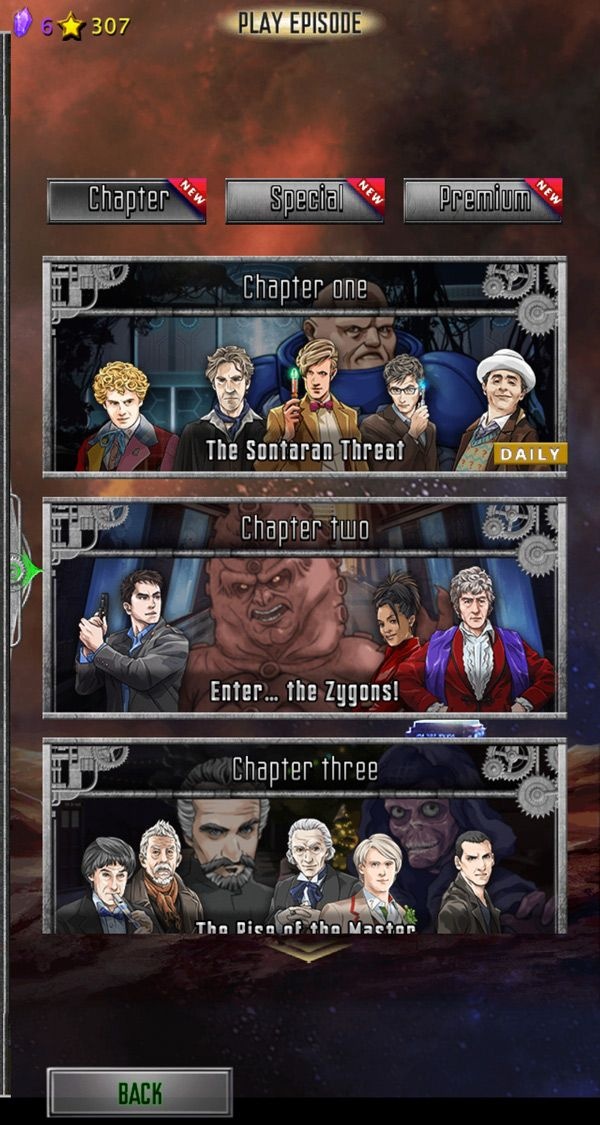 Completing a puzzle earns your characters experience points, which you can spend into three attributes: HP (hit points), ATK (attack power), and HEAL (the strength of a heal this character can "cast"). 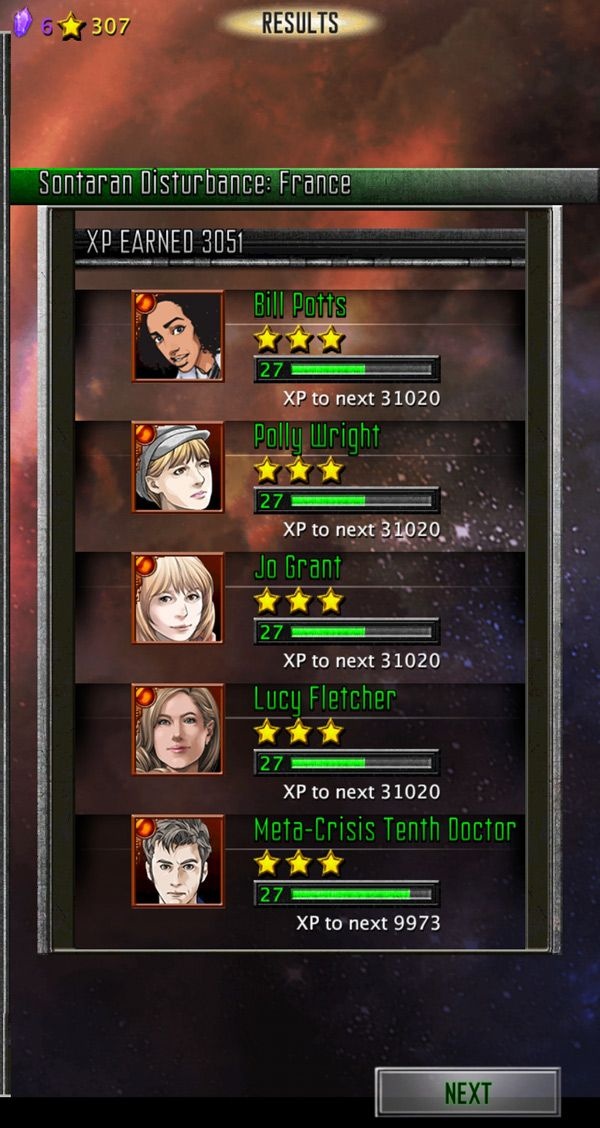 Image credits: Experience earned after completing a puzzle, by Naotalba

Depending on the character, a point added in one of those attributes isn't always the same. For instance, a Healer-type companion will gain more HEAL points this way than an ATK-based one.

Some companions are specialised in one attribute, and others are balanced in all three. I suggest having a look at the Doctor Who: Legacy wiki to check each character's speciality, as listing everything here would take too much space. 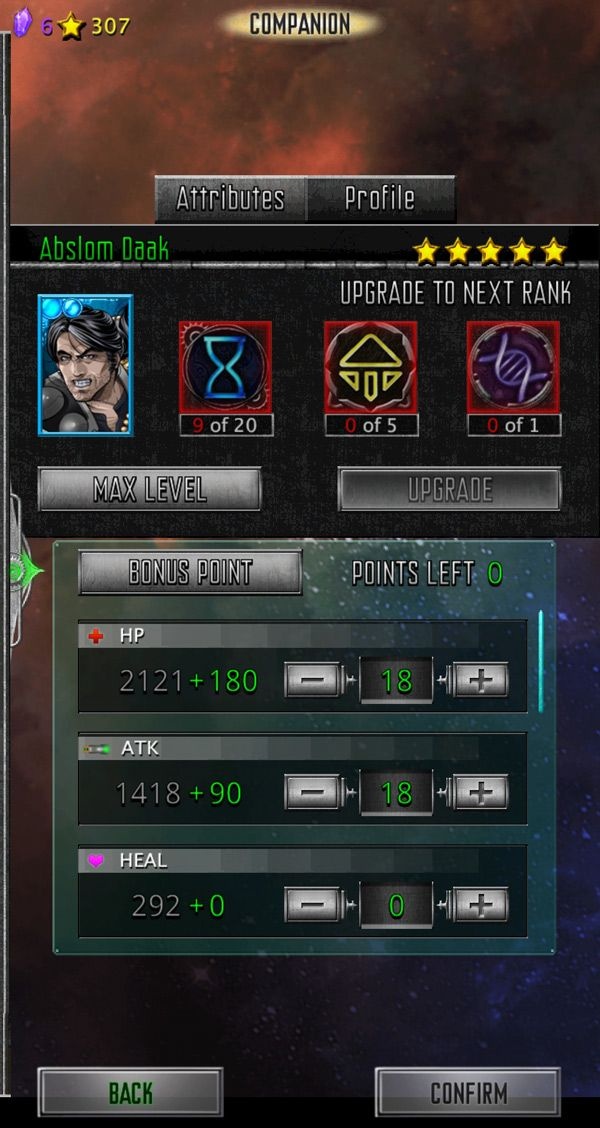 Each character is capped every 10 levels. When you reach this cap, you need to unlock the next Rank by spending time fragments, which you earn when you complete a puzzle. There are 6 basic types (blue, red, green, yellow, black, and pink), as well as Rank 5 and 6 fragments (Omega, Rassilon, Infinity and Strands), needed after Level 40, and bonus stat points fragments (Future and Past) that can be earned in fan levels and by completing Daily UNIT missions (every day, a different level is labelled "DAILY"). The latter type lets you spend more attributes points on a character after the final Level 60 cap. 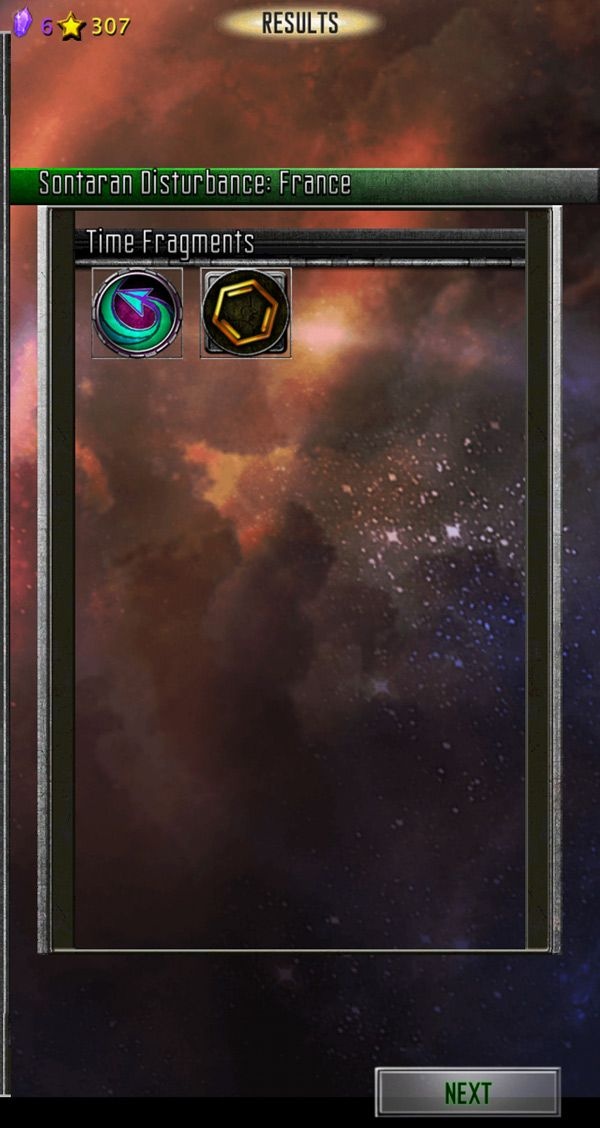 Doctors don't have attributes per se. Their attributes are based on the overall level of their companions. However, they get capped as well, and you'll need to spend Infinity fragments to unlock their next Rank.

When you first start the game, your team is made up of the Eleventh Doctor and of companions Jenny and Madame Vastra. You will quickly unlock others when you progress through the levels, and will be able to add up to 5 of them to your team. (The Doctor is mandatory; however, other Doctors are available later, too.) 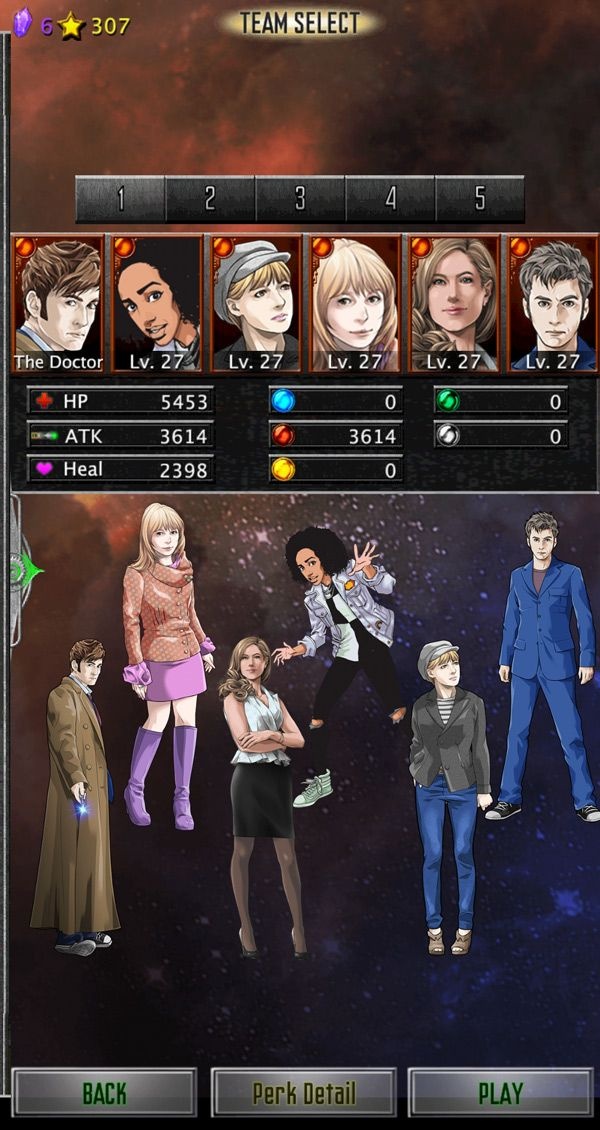 Your team's colours are important because of the way you need to gather rows of gems (see below). This said, each companion and Doctor also has a special power, which activates after a certain amount of turns; usually, the higher the character's level, the less turns are necessary before this power becomes available.

The character below, River Song, is a Red character with the power to turn Blue gems into Red ones. Using her power can therefore get you more gems for her to deal more damage. 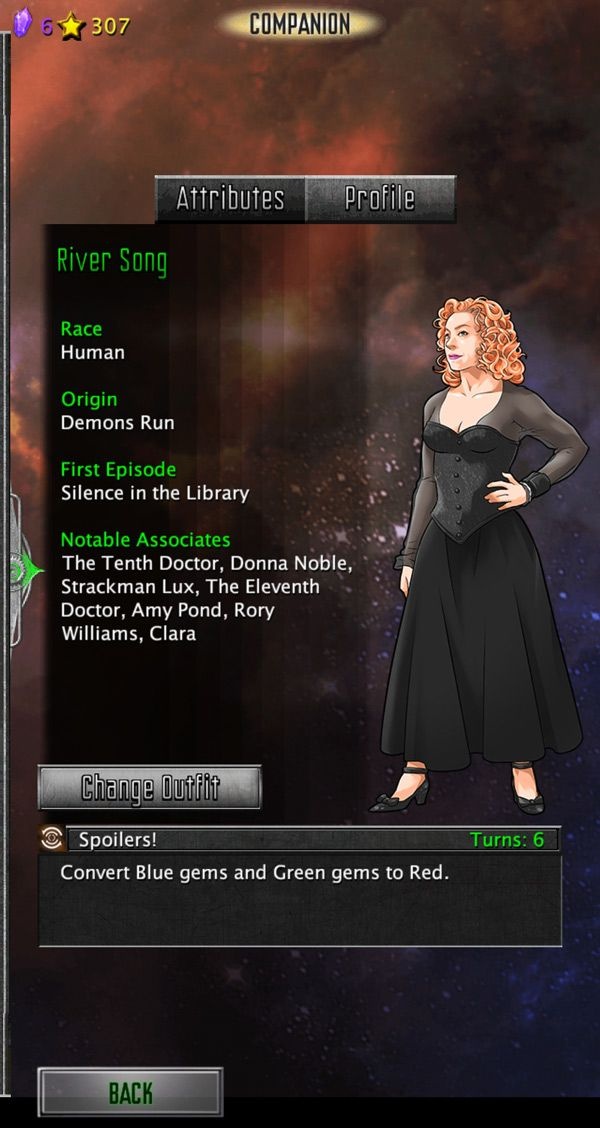 Each playing field is made up of gems that come in six colours: red, blue, green, yellow and black for "attack" gems, and pink for "healing" gems. The aim is to combine lines of 3 gems or more of the same colour.

This is achieved by moving around one other gem—choose well, because you only have a few seconds to do so! You can place it, of course, next to two other gems of the same colour, but that's just the basics. While moving a gem, this displaces others, allowing you to perform several combinations in a same puzzle.

Each companion and Doctor is associated to a specific colour (and to 2 colours after Level 40). This colour determines the damage they can deal to enemies. A Blue character will deal damage when you align 3+ blue gems, or a combo including 3+ blue gems; with a Yellow characters, the gems have to be, obviously, yellow. And so on. This means that if you have a team with all five colours, and you achieve a combo containing all colours as well, every character will deal damage, plus a bonus for the combo.

A combo is a group of gems composed of horizontal and vertical lines of three or more gems of the same color in a row. After the player makes a move, all combos on the board will be cleared away; any empty spaces on the board are replaced by gems from above (new gems will also fall from above), then any new combos on the board are cleared, and this process is repeated until no new combos form. Any characters on the player's team that match the color of the combos will get an attack for the turn; a combo of pink gems causes the player's team to gain health based on its combined Heal attribute. If five or more gems are cleared in a single combo that triggers an attack, attacking characters of that color will attack all enemies.

— From the Doctor Who: Legacy wiki

Pink gems are the exception, as they're used for healing. Every character can cast a Heal when you gather 3+ pink gems; here, though, their Heal attribute (see above) determines how many HP they'll give back to the team.

While playing, you also earn stars,  which after a certain amount let you unlock perks. These perks are of different types, and give you bonuses in game. For instance, the perk Colour Enhance: Red increases red gem damage for your team by 5%.

For the completionists out there, the game also includes achievements, recorded under your Google Play account. They, too, are of different types, such as beating a specific chapter, defeating a certain amount of enemies of a specific colour, or winning battles with characters of only one colour (the team I showed in one of my screenshots is a Red-only one, gathered specifically for the latter purpose). 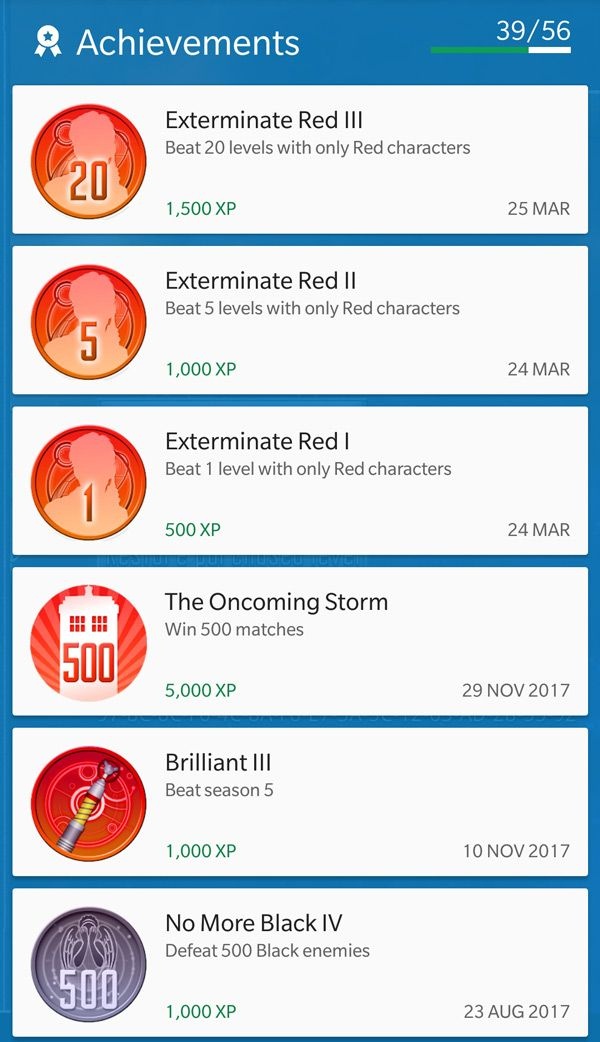 Time crystals are the currency used in this game. They allow you to buy outfits for your characters, unlock companions rather than having to wait for them to appear in game, and replay a puzzle that you've lost. Sometimes, you can earn a crystal while playing, too. 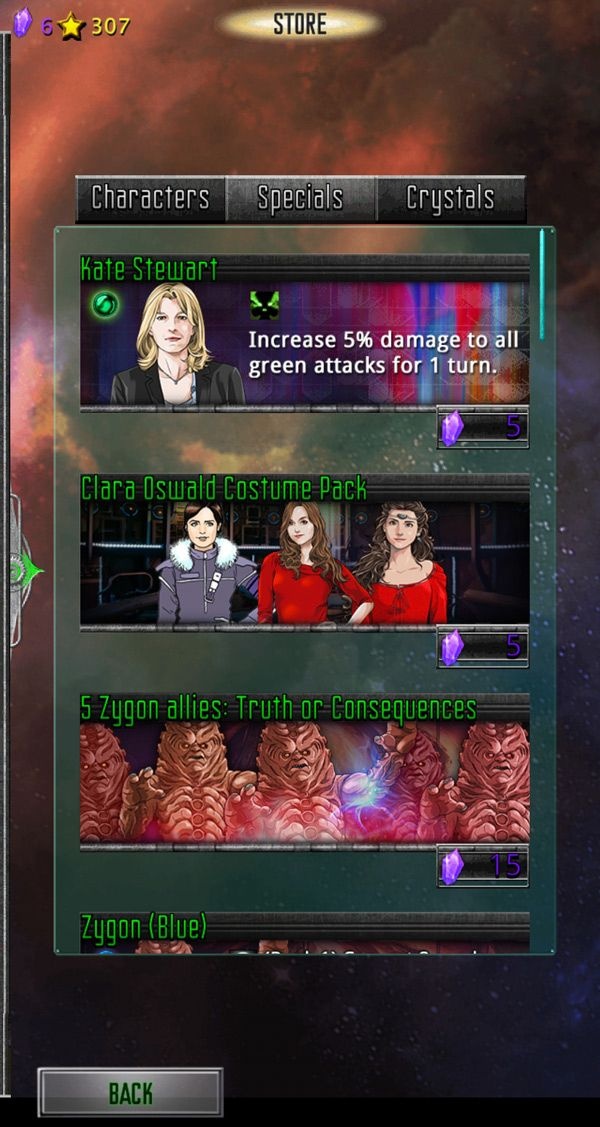 Image credits: What you can buy with time crystals, by Naotalba

The good thing is that you don't have to buy time crystals. You can, but the game is completely manageable without them. If you keep losing at a specific puzzle, for instance, you can always go replay previous ones to level up your team and go back to the story later.

You also receive 2 crystals for logging in 5 days in a row. If you don't use them very often, like I do, they accumulate nicely after a while. A piece of warning here, though: they're per device, not per Google Play account! If you start playing on a different device, your progress sis synchronised with your account, so you can resume where you've left... but you'll still start with zero crystals on that specific phone or tablet.

This is a game that can be enjoyed in the long run as well as in the short one. Its mechanics are fairly simple. The first chapter's puzzles can be completed quickly during commuting or short breaks. And micro transactions, while present, aren't mandatory at all, unless you really want to rush through puzzles without properly levelling your team and/or using perks and powers (or want to buy all outfits and characters in one go).

Written for bitLanders by Naotalba

Humans and Robots: What Awaits Us?

Humans and Robots: What Awaits Us? - Photo credit:medium.com, edition of Amber255 via bitLanders One…

Android-Synthetics: The Invisible Villains And Heroes Of The ALIEN World

Android-Synthetics: The Invisible Villains And Heroes Of The ALIEN World - Photo credit:alien-covena…