Does Mitt Know Diplomacy or at least Olympics?

Can Romney Get Brits to Dislike Americans as Well? After only a few years under the George W. Bush Administration, the US Government had dribbled away much of the sympathy and tangible support in the wake of the September 11, 2001 terror attacks. Remember, we Americans got so pissed-off with France that it became trendy to rename French fries into “freedom fries.” It was the British though that we always assumed we could count upon – an the UK followed the US into both Afghanistan and Iraq invasions. 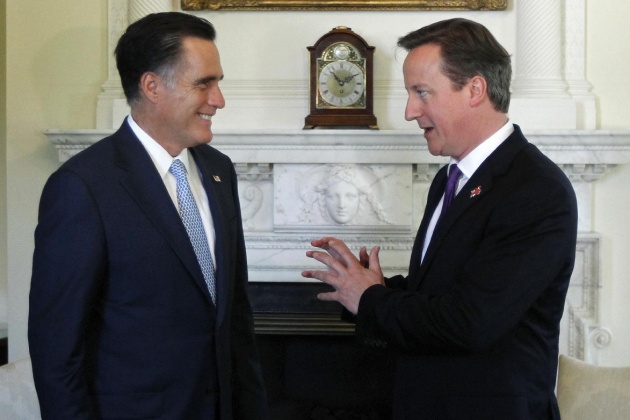 Now Mitt Romney has reminded the Brits the reason why some Americans are viewed as being so arrogant by appearing to denigrate their preparations for the Olympics. Imaging someone making us Americans seem even more arrogant than the Brits! Of course, Romney was trying to remind the globe of his credentials as the Olympic Organizing Committee head for the 2002 Salt Lake City Winter Games. Instead though he bought an insult back from Salt Lake City when UK Conservative Prime Minister retorted with his own by referring to the 2002 Winter Olympics’ host city as” the place in the middle of nowhere.” (See above Photo from Thursday where UK's Cameron appears to issue a lecture or at least rebuke to Romney - the former Organizing Head of the 2002 Winter Olympics " in the middle of Nowhere" - Did Romney punch back or just smile?)

Missteps are of course not to be unexpected when an American candidate travels overseas, a different language is spoken and the culture may have its own sensibilities. Of course, they speak English in the UK, the culture it is similar and Romney was supposed to know the Olympics.

Compare Romney’s London Olympic gaffe to UK Prime Minister Cameron’s interaction with President Barack Obama during a visit to Washington to happened to fall on the 200 year anniversary of the War of 1812 (between the US and Great Britain). That was when the British burned the White House and then got their butts kicked by the up-and-coming former colonials. (The two leaders also attended an NCAA Basketball playoff game-America’s annual Olympic type fix.) As the NY Times describes: “In each of their remarks during the official welcoming ceremony, the leaders ribbed each other about linguistics and what Mr. Cameron called an “unfortunate episode” of the War of 1812, when the British sacked Washington. But both men emphasized the abiding ties of an alliance that Mr. Obama called “the strongest that it’s ever been.” “We bleed together, we build together, in good times and in bad,” he said. Mr. Cameron said both nations shared a “spirit of innovation, creativity and risk taking” — in effect reclaiming attributes that Americans like to consider distinctly Yankee. “We Americans speak the same language most of the time,” asserted Mr. Obama. “David, we are chuffed to bits that you are here.” (March 14, 2012) 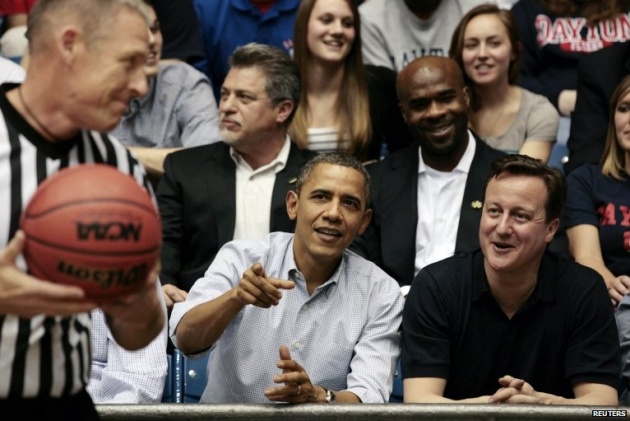 A Mitt Romney unnamed adviser also tried to employ something that sounded a lot like a race/culture card. He asserted that Barack Obama (presumably because he is half-African and of a Muslim father) does not share the “Anglo-Saxon heritage” that Romney asserts he does share with UK citizens, (at least the white ones and those who belong to the Church of England). Read our Blog for Film: “Republican Party of Lincoln & Teddy or Michelle Bachmann & Joe McCarthy?”. Putting aside that there are few Mormons in the UK, think that the Brits are too erudite to fall for that one. Segments of British society may suffer from racism and xenophobia but as a whole UK politics is even less inclined to suffer fools. On the other hand, the Brits are glad that Romney came to London – once again they can poke fun at least at one former colonial. Ironically, it is now Romney who is apologizing to London and its Olympic effort.

Also Read our Blog for Film: “From Sarajevo to London Olympics”