Education system of Afghanistan is for doers, not thinkers. 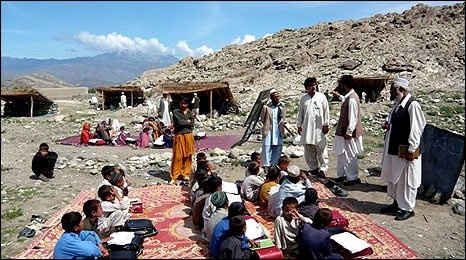 My patience with politics and money is always very easily tried the older and more educated I become.  The more Afghanistan blog ariticles I read the more I see why people get the wrong views.  How can any one person speak of anything being built, or whether it will succeed or not if they have never been there to see it? Of course the money issure can and will be used as an excuse along with many others to not get the job done. Building schools in Afghanistan should not be a money issue.

In order to test the waters for our investors and help Afghanistan in a respecful way, my idea is extremely simple, the majority of Afghanistan is third world and this is where the educational system of Afghanistan is non-existant.  When the United States was still colonial America, we were not riding our horses to Harvard Universities for example. The dedication of hardworking America turned us into what we are now. We overcame our civil and revolutionary wars.  In order to help Afghanistan it will simply take starting at the begininng. From the Afghanistan blog  arcticles I've read it comes across as a giant highschool or university is going to be built in a place where they are still riding horses. Of course that will not work.  When I was in Marjah Afghanistan I watched the kids go to school in a tent, with the chalk board outside. I was amazed at how disicplined the children were and that they treated that tent like it was a university.

The building of smaller schools in each village to where internet points can slowly start making their way to them from the bigger schools of Kabul is a great way to start.  For fear of the Taliban?  I've fought by some of the bravest men I've known and they serve with Afghan National Army. I saw how intensely they fought, and also heard from a few of how much they love their country and want the Taliban gone.  Education will destroy the Taliban. Building schools in Afghanistan and educating the children of Afghanistan will destroy the Taliban.  I compare the Taliban to Hitlers Nazi's in they destroy everything except for what they have to offer because it is a threat to them.The only education is their education thats why they have destroyed so many schools. During a clearing operation during my Marjah deployment we took a school from the Taliban and they did not get it back, as well as setting up another outside one of our patrol bases.

The education system in Afghanistan will be a slow but successful process if everyone stops thinking and puts it into action. I served the Afghan people not only in one of the most hostile provinces but also hostile villages. I saw the progress in the end. It was well worth it. What I personally want out of any Afghanistan endeavors is not a return on investement for myself, but to watch Afghanistan perhaps build themselves into what we are one day. Hopefully my opinion will catch the eyes of alot of doers. An old friend told me years ago, "someone is always watching."