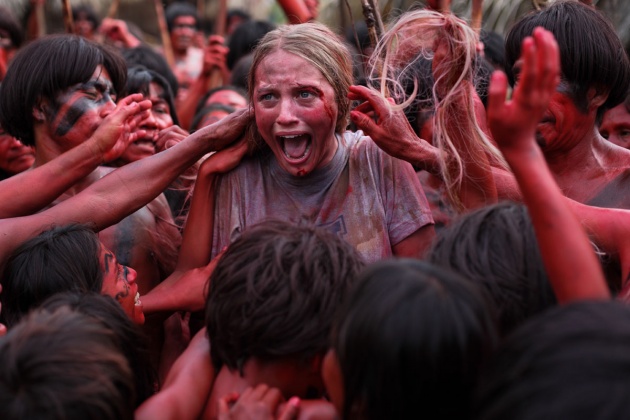 A group of wealthy university students decides to go to a remote region of Peru to prevent the destruction of an indigenous village exposed to commercial speculation. Everything goes wrong when a fateful plane crash leaves them lost in the jungle. They will begin to feel in their flesh the culinary tastes of the locals.

The Green Inferno is the latest film from director of Hostel, fully immersed in the genre of cannibals to show the fragility of the jungle and its problems when there are economic interests at stake. Local people are losing everything they have always had but apparently nobody can do anything about it. To reflect this, the director and his team moved to the Peruvian jungle where, as the director admits, have lived "a wild and incredible experience."

The script, writted by Guillermo Amoedo and Eli Roth, reflects the clash of two very different civilizations: the indigenous with their ancestral customs and a group of wealthy university students willing to live an adventure journey just enough time to not disrupt their lives too long.

When the gore begins we are already fully immersed in the film and the enormous surge of blood don't leave anyone indifferent. With a dizzying dose of the vital fluids and plenty of explicit amputations scenes will delight fans of the genre. Undoubtedly, The Green Inferno is an honest tribute to the Ruggero Deodato's film Cannibal Holocaust (1980).

About the cast, the director has surrounded himself by a group of actors that without being too knowns have enough experience for a project like this. Lorenza Izzo, who we have already watched at Aftershock by Nicolás Lopez, have the main role in this history. Also we can see Nicolás Martínez, another usual actor for Eli Roth. As always natural and spontaneous. The character of Daniel is for Ariel Levy, who is able to generate hate.

We can have big expectations with every film directed or produced by Eli Roth. For that reason, the requirement for the director and his work is increasing. This movie will leave a good taste to the audience that doesn't have too high prospects.