Eren's Picks, How to get Film Distribution and Financing on Film Annex

Once a Web TV is part of Eren’s Picks, it is featured on Film Annex's main pages proportionally to its Buzz Score. The higher the Buzz Score, the more exposure, and the more revenues and sponsorship. 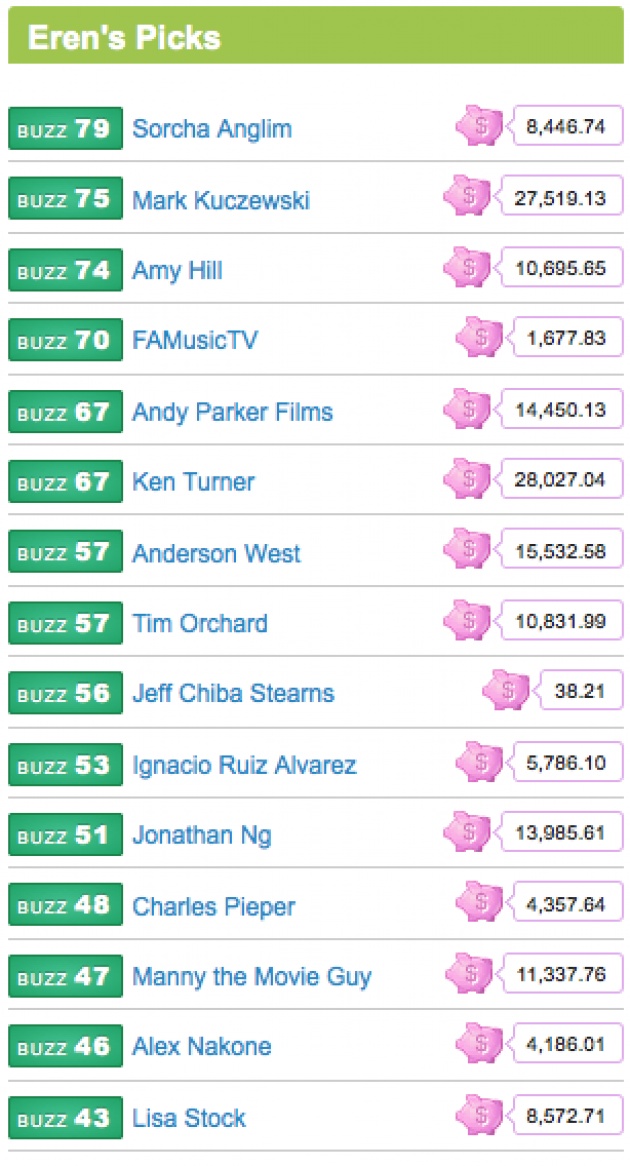 The first step is to meet Eren Gulfidan’s quality and content expectations. Eren has complete control of the platform. She has the last word. Many filmmakers, once they find out I am the Founder and C.E.O. of Film Annex, come to me asking how they can be featured on Film Annex. I always reply that they must satisfy Eren's expectations in terms of quality and quantity.

I have been with Eren since the very beginning of her work with Film Annex, so I can share with you my humble opinion about her expectation. Assuming she is satisfied and impressed by the filmmaker’s work quality and production, she will look at the functionality of his or her work on Film Annex platform and its social media impact. Here is a list of what I believe can impact her and her editorial team's decision:

a)     A great user and filmmaker profile, including a great picture or logo, a biography, hyperlinks to websites and social media platforms.

b)    The number of films and videos uploaded. I would suggest at least 8, including the film, interviews and making of’s.

c)     The film length. The videos, or the majority of them, should be at least 3 minutes long. They should have nice titles, great production quality, and a compelling story so that they could stand well on their own. In essence, it should NOT be a series of random episodes with no beginning and conclusion or without a clear message.

d)    Great picture galleries with interesting images correlated to the films and blogs being presented and discussed.

e)     Articles and Blogs. Each video and in particular each film should have great articles and blogs associated to them in the blog section, possibly 5 for each film and video. Actors, producers and directors can help each other write articles and blogs about the project, production and distribution experience. Blogs and articles should have at least 300 words and a great variety of pictures and embedded videos to better define the message in the article or blog.

f)     A Buzz score of 50 or higher, so that a great social media presence generates a great following, interest and debate. A higher Buzz Score will also allow Film Annex's algorithms to feature the Web TV on a higher frequency and consequently will generate more revenues. Great films with low following, interest and debate, have low Buzz . This limits exposure and revenue. This is where the filmmaker must be smart in blogging and using Social Media and Inbound Marketing strategies.

The above is a short list that I believe can help support Eren’s decision to feature and promote a specific filmmaker and Web TV. As I said before, Eren Gulfidan has the last word and maybe the advice above are just part of her selection process. I dare mentioning the above because I have worked with her for the last 6 years and my insight might be of help for filmmakers interested in working with Film Annex.

Personally, I don't want filmmakers to take too much of Eren's time. She is very busy with projects and films presented by Film Annex's 40,000 registered filmmakers. Wise filmmakers should understand her needs and present a compelling body of work so that Eren can work in serenity and focus on what is best for the best filmmakers.

I am focused on Women's Annex, the Afghan Development Project and all our educational activities in Central and South Asia, including the development and implementation of the Examer Educational Software in Afghanistan, Bangladesh, Bhutan, India, Kyrgyzstan, Kazakhstan, Maldives, Nepal, Pakistan, Sri Lanka, Tajikistan, Turkmenistan, and Uzbekistan. Our latest production is An Afghan Prospective on CB's 60 Minutes, a weekly column by Film Annex's liaison to Central and South Asia, Ms. Fereshteh Forough.