Event Review: THE EXPENDABLES 1 and 2 with introduction by Terry Crews 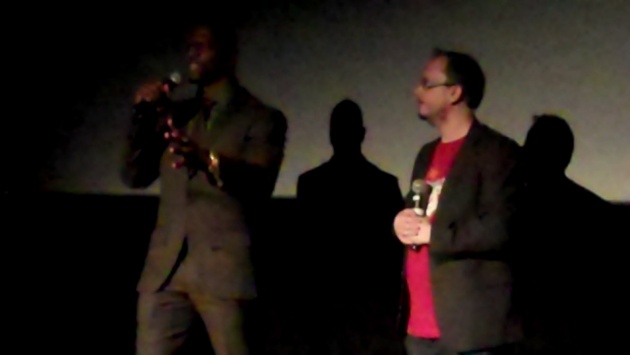 Are you excited by THE EXPENDABLES 3 with its promise of celebrity ego conflict, badly choreographed action, explosions, splatter and gratuitous misuse of catchphrases? It sounds like a charity golf event: ‘yippee kay-yay three iron’, ‘I’ll be back – in the bunker’ and ‘Adrien - I can’t find my putter’ – cue cameo from Adrien Brody, before he resumes his search for Boy With Apple.

On Tuesday 15 April 2014, a select audience corralled by the website ‘This is Fake DIY’ were treated to a sneak preview of the new trailer at the Vue Westfield in Shepherd’s Bush, West London. Naturally, we expect them to be dumped in a remote location where the scriptwriters can reinforce a few racial stereotypes. The only surprise from the trailer is that we see them abseil down a building – or was it their stunt doubles? Maybe the remote location is in fact Shepherd’s Bush.

For those unaware of THE EXPENDABLES franchise, and let’s face it, with the death of the video store that is likely to be a lot of people, it is a collection of once famous action heroes who now cannot headline a film individually, as the grosses of Arnold Schwarzenegger’s ‘comeback’ movies THE LAST STAND and SABOTAGE attest.  The ego behind is Sylvester Stallone, who shunned the opportunity for a lead role in Quentin Tarantino’s DEATH PROOF (‘who wants to play board games, I hit people’) to bring back Rocky Balboa, John Rambo and AVENGING ANGELO, well, maybe not the latter before he took David Callaham’s script and Stallone-ised it. The cast list of the first film included himself, Jason Statham, Dolph Lundgren, Randy Couture, Jet Li and Terry Crews, with Eric Roberts and Steve Austin as the villains. Notable too were gasp making cameos by Bruce Willis as the mysterious Mr Church and Arnold Schwarzenegger, who was just terminating his career as the Governator of California and threatening, if memory serves, to terminate his marriage.

Released in the same week as SCOTT PILGRIM VS THE WORLD, it bounced the latter movie out of muliplexes. Watch both movies now and you’ll know which one holds up better – the one with the Evil Exs, not the one with the feeble ex-action heroes. There is no accounting for taste; two years later a sequel was born, though Mickey Rourke, who cameoed as a tattoo artist in the first one, gave it a miss. With the threequel the cast list is bigger than the cameo-tastic finale of ANCHORMAN 2. Joining Stallone are Wesley Snipes, Harrison Ford, Antonio Banderas and Kelsey Grammar, who apparently knocks over a coffee cup, as well as Schwarzenegger, Couture and Crews, but not strangely Craig Fairbrass, because who remembers him?

You couldn’t lure 150 people just for a trailer. Rather we were treated to EXPENDABLES 1 and 2 introduced in person by Mr Terry Crews, the only EXPENDABLE without real action movie recognition. I’ve seen him in EVERYBODY HATES CHRIS, BROOKLYN 99 and BLUE’S CREWS, well maybe not the latter, though I can see him talking to the little blue dog before turning to the camera and saying ‘this is why smoking is bad for you!’ Crews was charm incarnate; you wished someone would give him an action franchise to headline, but when you say that you’re seeing the new T Crews movie, they naturally think of someone else.

Crews’ character is Hale Caesar, who what he lacks in dialogue and a back story makes up for with a really big gun. According to him, the name Hale Caesar almost disappeared from the script; instead his character was renamed Chaz Gumbo. Crews of course did not sign up for gumbo, not that he has anything against New Orleans, so he knocked on the door of Stallone’s trailer before popping the question to the Oscar-nominated screenwriter. ‘No, there isn’t a role for you in ROCKY SEVEN,’ Stallone might have replied, if the question wasn’t: ‘can the character go back to being called Hale Caesar?’ ‘Sure,’ said Stallone; and salad rather than gumbo was back on the menu.

When Crews handled such a big gun, was he troubled by recoil? No, he had to create the recoil himself, because this is the stuff actors do, especially if you are lower down the order and the budget was spent on explosions rather than firearms.

Did the stars work out together? No, they kept their exercise regime separate so that they did not get in ultra competitive mode; Couture read the script, now I’ll have to read the script, that sort of thing.

Did Crews have a bad thing to say about Jason Statham? He wasn’t even asked that question.

Who was the most formidable EXPENDABLE? That would be cauliflower-eared Randy Couture who once crept up behind Crews and put him to sleep. I think it was during a dialogue read.

Was it a smooth shoot? Not exactly, Stallone sustained serious damage to his neck during a fight with Steve Austin. He neglected to rubberise the wall he was slammed against. He was in his early sixties and hadn’t taken such a bad beating since critics savaged DRIVEN. Crews and the others wondered whether the movie would be finished; especially if Stallone was writing it as they went along. (That is mere speculation on my part.)

Why was Crews wearing a suit and not action fatigues? ‘We’re in London’; us guys are snappy dressers with our bowler hats and propensity to go into costume shops before being greeted by a man with a fez who encouraged us to try stuff on. A suit of armour? Why if you go this way, you might end up back in the Middle Ages and catch up with Heath Ledger.

I have to say EXPENDABLES 1 was just as underwhelming as it was on first viewing with its plotting by numbers – Stallone’s Barney Ross attempts to assassinate a tyrannical Colonel but has to flee a fictional South American country because it cannot be named for legal reasons. He returns for the Colonel’s daughter who is his contact with a Latin American demographic. More stuff gets blown up. The sequel has a better director (Simon West) but is even worse: Villain Jean-Claude Van Damme has a chance to expend them and does not do so. Moreover, whenever the actors get in a hole, a faded action star (Chuck Norris) turns up – cue gratuitous references to LONE WOLF MCQUADE, but not strangely CODE OF SILENCE, which was a bigger hit. The good news was that even with two introductions and two movies, we left the cinema by 10:00pm; not so much grindhouse as ground out.

With thanks to This is Fake DIY. Chris Hewitt from Empire magazine asked the difficult questions

BULLET TO THE HEAD: a movie review

Hello Bitsers. Now a days, due to much free time, watching a movie and writing my thoughts down in a…

Good day to all humans. Let me tell you first this is not Lady Khokarjamal69. This is an alien who l…