We all love toys. Young or adult, who would refuse them? Toys have been a part of our childhood, and so as an adult, seeing and having one reminds us of our carefree, stress-free, and joyful days when we're still little. It serves as a piece that would remind and connect us to our younger self before we have been tampered with stress, responsibilities, priorities, dramas, etc. All that stuff adults should give priority to.

Growing up means stripping off the inner child in you which is a sad reality. However, there are some who had managed not to lose their young heart as they grew up. These grownups would most probably be the toy collectors. For your information, collecting toys as a hobby is an expensive hobby. If you think toys are just plastics with very little value then you're completely wrong. Limited edition, exclusive toys, and those produced by top toy manufacturers can break your wallets. One example which I will be writing about today is the Funko pop featuring the mascot of Philippines' most-loved fast food chain—Jollibee!

JOLLIBEE GETS A FUNKO POP VERSION! 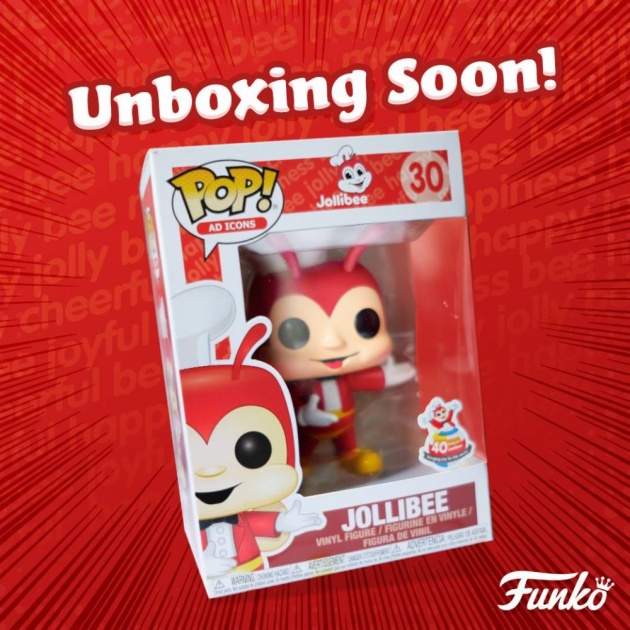 Last June, Jollibee had posted on its social media accounts a teaser of its upcoming special toy in celebration for the fast food chain's 40th anniversary. Many Filipinos were surprised, excited, and utterly happy to know that Jollibee had collaborated with a well-known toy manufacturer to produce a cute version of Jollibee's iconic mascot. The Jollibee Funko Pop which costs Php 650 or $12.27 USD features Jollibee's pose like the one which can be seen at the fast food's entrance where his arms are extended pointing to the direction of the door. The fast food's mascot is a red bee with yellow stripes wearing a chef's hat, red suit, and a black bow tie. He has a smiling face, probably the reason why he is called Jollibee, because he is a "jolly bee." 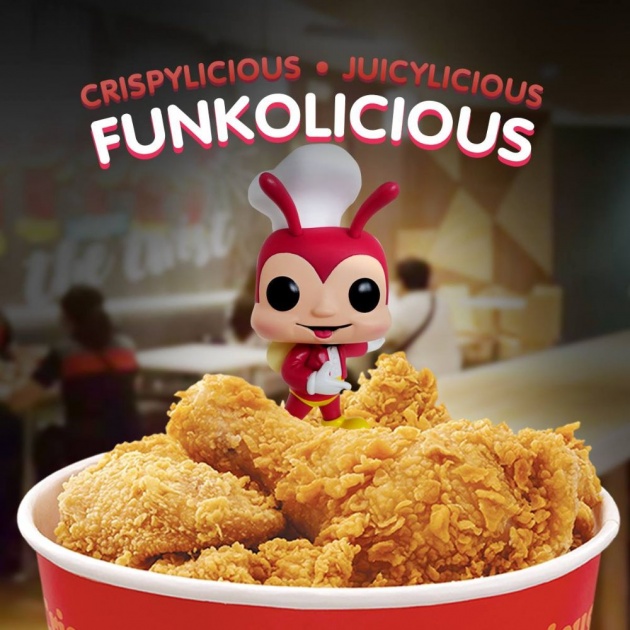 (Here's a teaser video of the Jollibee Funko Pop) 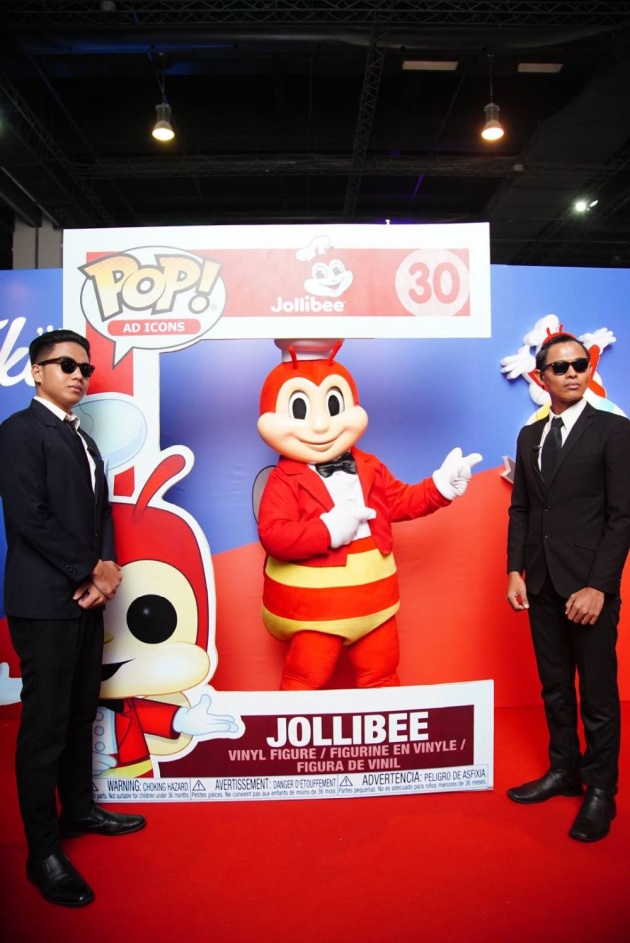 Jollibee is a Filipino fast food chain established in 1978. Their menu is a hit to the Filipino masses because of its sweet and flavorful taste which is loved by everyone of all ages. Some of their popular foods are the chickenjoy, spaghetti, burger steak, yum burger, peach mango pie, etc. As of today, Jollibee has more than a thousand branches all over Philippines, you could probably see a Jollibee branch anywhere you go in this country. In our town, there are two Jollibee branches while the city next to us has six Jollibee branches. Of course, Jollibee isn't only exclusive in the Philippines. They already had began branching out to other countries as well to bring the taste of the most-beloved Philippine fast food chain to the Filipinos living abroad and for people of different nationalities to try Filipino fast food.

Jollibee is a Filipino brand and so, a Philippine pride. In fact, Jollibee is an undisputed fast food chain in our country, not even the world-wide popular fast food chain with a clown mascot could bring it down. Ask kids which fast food chain do they love most and you'll surely get Jollibee as a majority answer. Even my child self would pick Jollibee in a heartbeat! I only go for the toys at the other fast food chain but Jollibee wins my heart because aside from the toys, the foods are very child-friendly. (Haha.) I mean children love sweet-tasting foods so that's the best thing about Jollibee, their foods are approved by kids' palate. Another reason why my younger self loves Jollibee more is that Jollibee has a more friendly and welcoming ambiance. I would rather see a happy bee than a clown, you know. In addition, Jollibee's mascot is a symbol of the hardworking attitude of Filipinos. Bees are hard workers and so a bee is a perfect representation for Filipinos.

Funko is a toy company from Washington, USA established in 1998. A Funko pop toy is a cute and little version of an icon or character. The pops can be distinguished with its distinct figure design and packaging. An average size for this toy is around 3.75 inches. Funko produces different characters from movies, television series, anime, games, public figures such as athletes, musicians, etc. These toys are very popular toy collection today. Why? They're so cute who would resist to collect them.

A funko would usually cost around $10 USD, but rare, limited edition, and exclusive ones can be quite pricey. Vaulted pops are also sold at a higher price. (Vaulted means that the production for a certain toy has already stopped.) 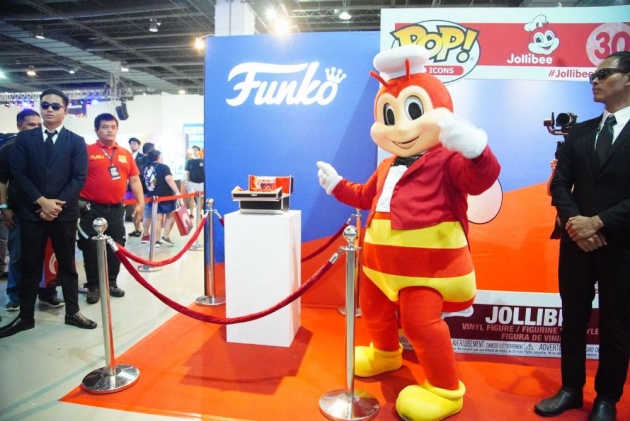 Last July 27, the most-awaited Jollibee Funko was launched at the Asia Pop Comic Con (APCC) at the SMX Convention Center in Manila. A Jollibee mascot came to the event, walked on a red carpet while carrying a small vault where a Funko pop was stored. (Check this comic style photos uploaded by Jollibee.) Jollibee fanatics lined up for at least 8 hours to get a first dib of the toy. (Wow!) 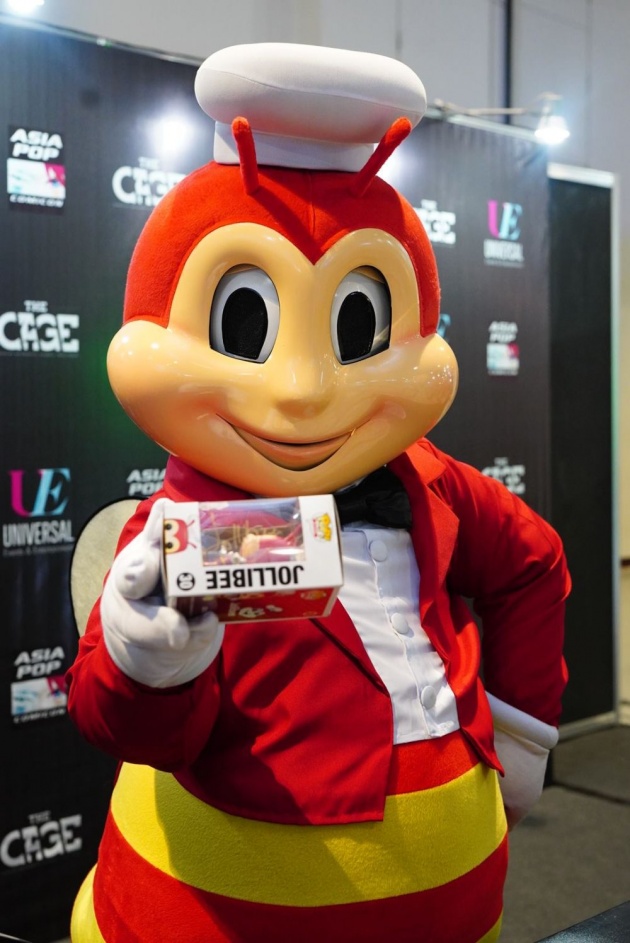 People who bought the pop at the Asia Pop Comic Con also had the chance to have their toy signed by no other than Jollibee himself and there's a huge Funko box too where you can take photos with your newly bought Jollibee Funko. Based from my observation from those who have bought, the toy was only limited to two pieces per person. The Funko pop was sold at APCC until July 29. 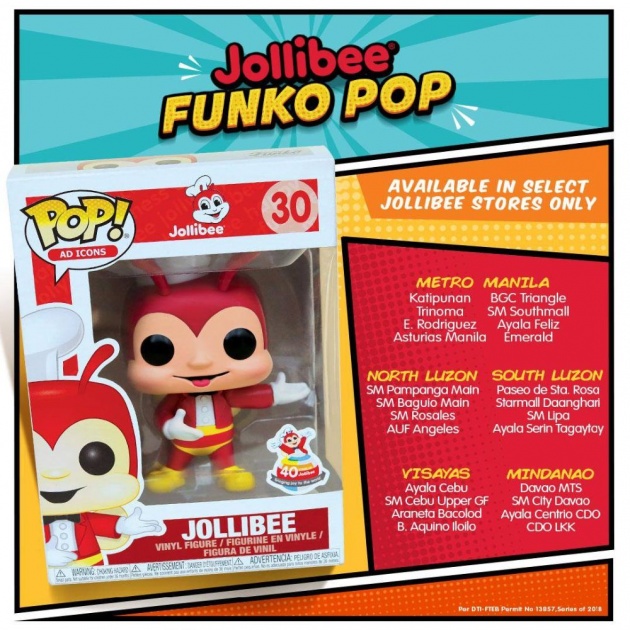 Meanwhile, a nationwide release took place last July 30 on select branches. Jollibee has mentioned beforehand that stocks were only limited and so the toy is only available until supplies last.

I don't have any Funko pop collection but I am familiar with it as I have been eyeing on some Funko pop characters to purchase someday (which never happens because I got a serious love and hate relationship with money.) That's why when I knew about Jollibee getting a Funko pop version, I immediately told myself that I would be getting one for myself and for my sister who's currently residing on another country. I thought it could be a beautiful gift for her since it's been years since she left the country and I am sure she misses Jollibee so badly.

On a side note, there was a guy from another country who messaged me about the Funko and asked me if I could buy a bunch for him. Honestly, a huge part of myself doesn't want to give in on his request because that means sending the toy to a non-Filipino and having it sold to whoever knows for a higher price. Knowing the toy is limited, it had came to my mind that if I grant the request of this guy then it's like depriving the toy to the real fans of Jollibee. Plus, you have to purchase 1 chickenjoy bucket to buy 1 Funko pop. A person can buy a maximum of 3 Funko pop. If I bring someone with me then we can buy 6 Funko pops. But what shall we do with the 6 chicken buckets? (Haha!) Thank goodness I got a way for him to refuse me, and that is offering a selling price with an amount he would surely not agree with.

Came July 30th, I went to the select Jollibee store in my province only to find out that it was already...

I was frozen for a moment when a Jollibee crew told me of this sad news. He told me that only 130 pieces were sold at their branch and it has been sold out very early. He mentioned that a lot of people had already lined up for the toy even before the mall opened. How sad! And good thing I didn't agree to buy some for the foreign guy. But it's really sad that I didn't get any for myself and my sister.

While eating our early lunch at Jollibee (oh how ironic), I saw some people who bought lots of the Funko. Some even have like nine pieces with them. Forgive me, but I think most of it will just go on selling sites. What are they going to do with that much toy anyway? Will they even spend thousands of Pesos just for a toy to be given to their kids, relatives, or friends? 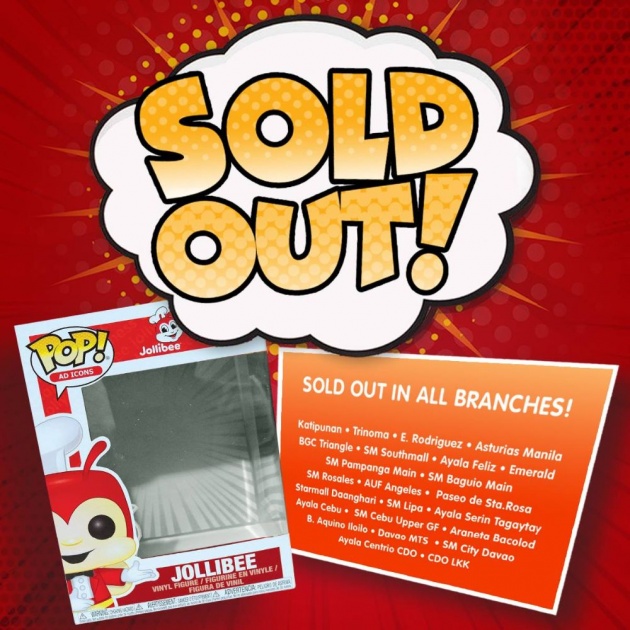 Two hours later, Jollibee had officially announced on Facebook that the Jollibee Funko was officially sold out in all their select stores. I read comments on that post and found out that the Funko promo of Jollibee was a fail. Even though there were lots of true Jollibee lovers and collectors who had secured their piece, a lot of hoarders and resellers had joined the hype as well! Which is why the toy easily got sold out. Go on to some popular online shopping sites and you'll find the Jollibee Funko pops there. Some even said that some stores had already began selling the toy before the supposed official selling date. The reason why only few pieces were sold on some stores during the selling date. 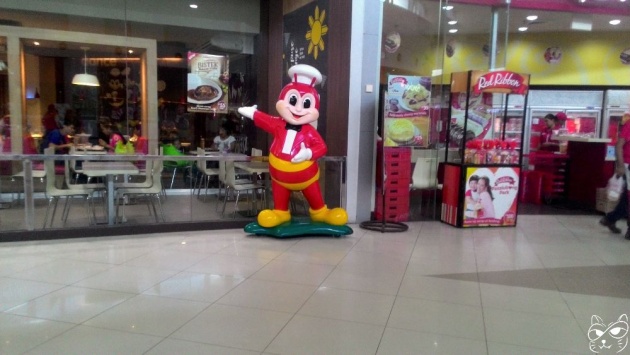 (image source: Katsanslimites)
Photo I took before I left the Jollibee select store.

This is really sad for those who truly adore Jollibee that instead of getting a chance to have it as a collection, the toys went into the hands of people who are hungry for money. Anyway, there's nothing we can do about it and it seems that Jollibee doesn't care about the issue where lots of the Funko is being sold on sites for a very high price. 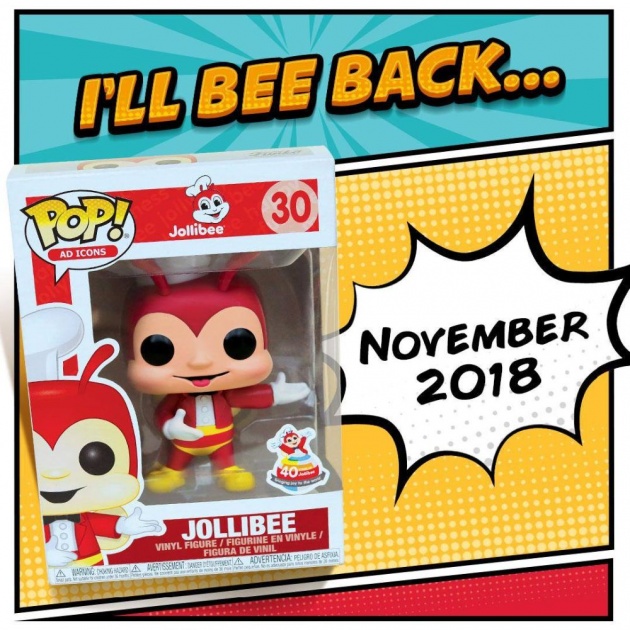 Three days after the Jollibee Funko was sold out, Jollibee had announced a restock of the Funko which will be sold by November. This gave hope for people like me who haven't gotten any piece to own one. I just hope they make it available in most branches (if not all) or on the same Jollibee select stores again. 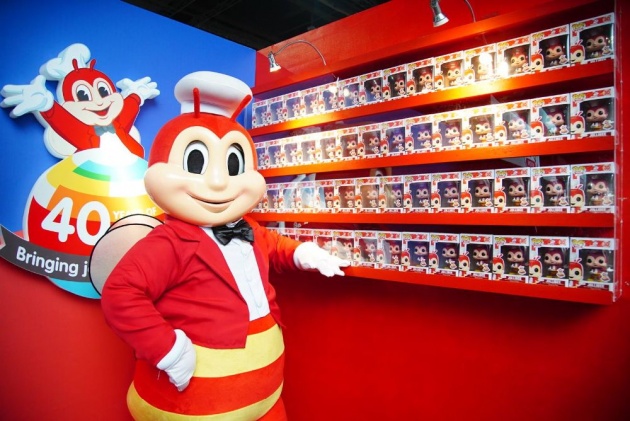 If this will be available on a branch near my area then I might try my luck again to grab this Funko. Maybe I'll be luckier next time. And hopefully, hoarders and resellers would stay away from this and give chance to others. I can't believe the hype Jollibee has put in for this toy was overwhelming. If they haven't mentioned that it's limited then this could've prevented opportunists to join the craze. Anyway, this just shows how popular and loved Jollibee is!

Too bad I can't do a review of the Jollibee Funko Pop itself but I would surely write one when I successfully get my own pop on November. Good luck to me and for those who would try to get it too!

JOLLIBEE: Dubbed as Asia's answer to McDonald's in the fast food business!

One of the world's most iconic toy stores is shutting down

ByHayley Peterson14 hours ago (Reuters)Toys R Us has a Ferris wheel in its flagship location.Toys R …

Source: Google You Hee-Yeol's Sketchbook: Talk Show and Live Music Shows Again, in this blog I will …

Star Wars and Funko are proud to unveil Smuggler’s Bounty

Star Wars.com and Funko are proud to unveil Smugglers Bounty, the only OFFICIAL Star Wars subscripti…