Film Annex - The future of DIY online monetization? Part 2 of 2

This is part two of a two part blog series on my experiences using Film Annex as an online video-sharing platform.  If you haven’t already, please read Part 1 here!

Recently, I had a conversation with Eren Gulfidan, Creative Director of Film Annex, about the multitude of online video sharing platforms I’ve been using to try to monetize off my work.  When my short animation, Yellow Sticky Notes, was going viral on YouTube back in 2008, as a YouTube Partner, I’d see a check for a couple hundred bucks every three months from Google. Although these days, YouTube is getting extremely cluttered and I haven’t seen a check from them in over a year.  Other sites like Vimeo have been trying to help filmmakers monetize their work and I noticed that if you have Vimeo Plus, you can add a tip jar to your videos for people to ‘tip’ your videos.  Although, after having some of my films up on Vimeo for over 3 months, I’ve had exactly zero people ‘tip’ my videos.

In December of 2012, I signed up to Film Annex and started Meditating Bunny Studio WebTV. So far it has been the best form of online monetization that I have ever been involved with.  After speaking with Eren last week about all my trials and tribulations with video sharing platforms, she suggested I write a blog post about my experiences with Film Annex…

What I like about Film Annex is that it is moderated and curated.  Film Annex was created by filmmakers for filmmakers.  Every video has to get approved before it is uploaded and becomes available for viewing. This allows for quality content. No dog or cat videos or videos of people getting kicked in the nuts.  One of the biggest  problems I've found with YouTube is that serious filmmakers get lost amongst the slew of the millions of home videos being uploaded every day.  If you do get lucky and get noticed, you may be hot one day but replaced in the blink of an eye the next.  At Film Annex, your collection of films is part of your WebTV.  So if someone likes one of your videos, chances are they will check out what else you have posted.

What I can’t stand these days about some other video sharing platforms or online film festivals is that think they are doing you a favor hosting your videos for free just because you’ll get exposure with them.  That is totally bogus, they are making money off you and not sharing it with you.  We are filmmakers and we should be monetizing off of our work.  This is not a hobby for me, this is my career.  Therefore, at Film Annex because it is run by filmmakers, they understand this.  A filmmaker’s WebTV has the ability to monetize off of an adshare revenue plan.  Films and videos on a WebTV will generate revenue from the ad share program by splitting 50% of ad revenue with the filmmaker and 50% with Film Annex.  So if people are being directed to your WebTV, you have the ability to make some money.  The other nice thing about Film Annex is that you can have a blog directly connected to your WebTV.  It’s a great way to share insights into you work, talk about the filmmaking process, discuss the making of each video, offer filmmaking advice, gain some more exposure, etc. It’s also a nice way to compliment your videos and hopefully drive more traffic to your WebTV with the chance of being featured on Annex Press for even more exposure.  By increasing you Buzz Score through sharing your blog posts and videos on social media sites like Facebook, Linked In, Tumblr, and Twitter you can also tap into generating more revenues. 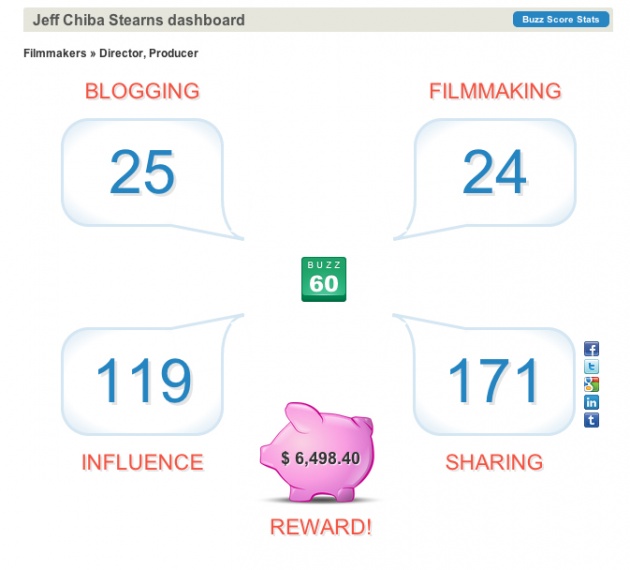 What took me a bit to get used to was the fact that Film Annex is very transparent.  Anyone can see how much money I have collected so far in my piggy bank.  It does get addicting constantly checking my piggy bank to see how much I’ve earned and I find myself checking in 3 or 4 times a day.  Film Annex even made a piggy bank app you can use to monitor your earnings. As well, you can see how much revenue you have made each day on a personal revenue page that is updated in real time.  Another interesting thing is that I can see how much other filmmakers have made too, right on the home page in Eren’s Picks. It’s pretty impressive to see the numbers that other filmmakers have made so far since Film Annex instituted their revenue splitting model.  For example, Mark Kuczewski has made over $35,000 dollars on Film Annex!

The real revenue for me came when I was featured on Eren’s Picks about a month and a half after joining Film Annex.  Once that happened I saw a huge spike in my revenue.  Eren’s Picks are 15 WebTV channels that she features on the Film Annex home page.  Most Film Annex visitors will check these out because they are recommended and featured on the homepage of Film Annex.  Since being on the list, I can say it’s become a bit of a friendly competition among the filmmakers trying to increase our Buzz Scores and climb higher on the ladder, which ultimately leads to making more money.  Ever since I was added to Eren’s Picks and have been a Featured Filmmaker and Sponsored WebTV on the homepage, I have seen my revenues skyrocket.  Sometimes making over a $100 a day.  It’s like having a full time job where I let my blogs and films do the work for me. 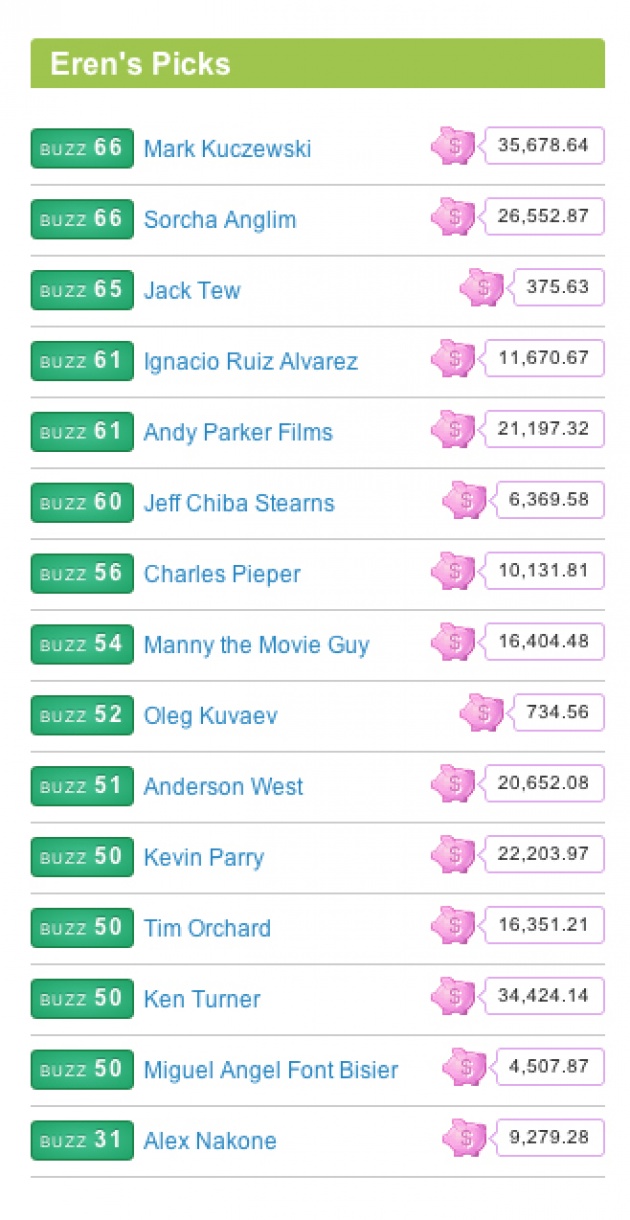 Since signing up in middle of December 2012, I’ve made approx. $6000.  I’m cool with telling you this because it’s pretty much open for anyone to see on my Film Annex page. The graphs and charts that Film Annex uses to convey their info to the filmmakers is clear and easy to use.  You know exactly how much revenue you are making each day.  It does help too that I have a decent sized library of content stretching over 14 years and stay current with my blog posting.

Sure I can admit I was a little skeptical at first of the money filmmakers were making on Film Annex…I’ve always been told if something is too good to be true, it probably is.  Although, I’m happy to say, that Film Annex is the real deal. You have to earn over $200 before you can request a payment and you have to let the earnings mature for 90 days so Film Annex can make sure they receive their payment from the advertisers.  A couple weeks ago I collected my first payment!  So I know it works.  As well, Film Annex has 273k Likes on Facebook so there is a feeling that people also like what they are doing.  I really love this philosophy that Film Annex is for filmmakers by filmmakers because there is a value placed on content.  There are filmmakers on here who have put pride and passion into their art making and it shows.  As a filmmaker, in this day and age, the internet is fast becoming our greatest tool for monetization and exposure and filmmaker supportive sites like Film Annex are making this easy for filmmakers to achieve this. 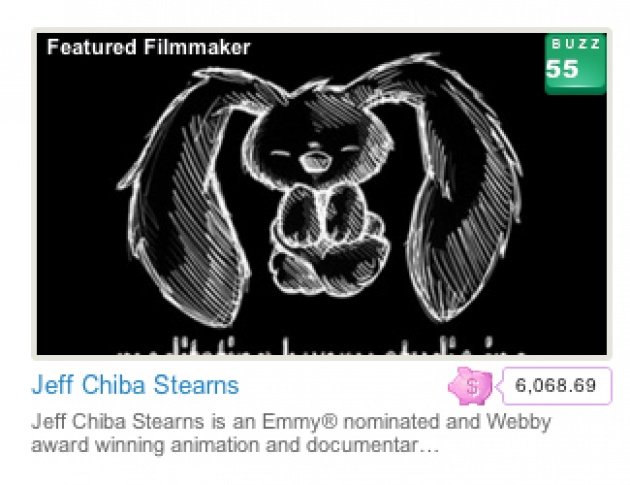 Video sharing sites like Film Annex seem like the wave of the future and I really respect that they split their revenues with filmmakers in this way.  Because it is so easy to bit torrent music and films, streaming really is the way to go for filmmakers to generate revenue from their content.  DVD’s are dead and no one is buying digital copies of short films on iTunes.  I think Film Annex has something here and if the trade off is having to watch a 15-30 second commercial before being rewarded with some cool films, I don’t see a problem with that!  It's like going back to the television model invented in the 40's and 50's of showing an ad but getting to watch a free show. There has to be some kind of trade off and advertisers know that this is the new frontier.

Therefore, by having quality content, a sense of a filmmaking community, ad revenue sharing, and a friendly supportive personable staff, using Film Annex has been a really enjoyable experience.  It’s only been four months since using Film Annex but I’m already looking forward to seeing where I’ll be at a year from now and watching how Film Annex will continue to grow as a major hub for filmmakers who want to showcase and monetize off their work.  Like any new frontier of online monetization, Film Annex will evolve, my filmmaking will evolve, and I’m excited to see how we will evolve together.

Please subscribe for updates on future blog posts and video uploads. Thanks.

Here's my 2010 stop motion film Ode to a Post-it Note which had a bit of viral success too when it was first launched online.  The film is sort of follow up to my animated short, Yellow Sticky Notes.