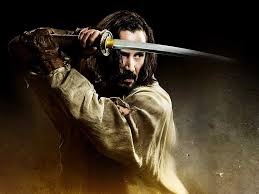 The audience’s patience is very much put to the sword by 47 RONIN, a big-budget American re-telling of a classic Japanese story, with an all-Japanese cast except for Keanu Reeves – and just to add insult to cultural injury it was filmed in Eastern Europe. You can see why Universal Studios developed the project, recognising Asia as both a big market and a co-production partner. THE WOLVERINE was set in contemporary Japan, and also featured just one English-speaking star, Hugh Jackman. Universal Studios clearly thought this was a model to follow.

Has there been a successful film featuring American stars as fishes out of water – or, if you prefer, sushi out of serving plates – in Asia? Hollywood movies of the last four decades suggest mostly not. Whether it is Robert Mitchum in THE YAKUZA (Sydney Pollack, 1975), Mickey Rourke in THE YEAR OF THE DRAGON (1985) or Michael Douglas in BLACK RAIN (1989), the detective figure cast into an Asian community hasn’t yielded gold. Neither has the cross-cultural romance between Dennis Quaid and Tamlyn Tomita featured in COME SEE THE PARADISE (1990) appealed; Christian Bale made little commercial impression in THE FLOWERS OF WAR (2011). THE MUMMY – TOMB OF THE DRAGON EMPEROR (2008) also numbed the audience. The one success that might be considered the benchmark is THE LAST SAMURAI (2003), a DANCES WITH WOLVES-style drama in which Tom Cruise dons the appropriate armour. The most important element of this movie is that Cruise’s character learns a set of values that he can aspire to, that mean more to him than the ways of the west. Successful American films set in Asia need a dose of self-criticism.

The American point-of-view is not represented in 47 RONIN. Reeves’ character, Kai, is half-British, a child born out of wedlock to a Chinese mother and British father left to die in the forest. He was raised – no kidding – by evil spirits and then taken in by a samurai’s family. He falls for a sister figure but can never be a samurai. He has no status: ‘it’s just the way it is.’

The story has a classic (read: generic) construction. A Japanese clan is duped into losing its lands by magic under the veneer of honour. Only Reeves’ Kai, the outsider, can help. It has a very un-Hollywood ending, arguably honourable, in which the 47 Ronin, that is ex-Samurais, take back their land but having defied a proclamation of the Supreme Ruler have to do the decent thing – Reeves’ character included. This is seen as a mythical act of sacrifice, elevating the 47 Ronin to the stuff of legend. All I see is a Supreme Ruler who watches one Clan take on another; both lose so he gets to benefit, right?

For 47 RONIN to work as spectacle, at least one member of the Asian cast needs to be at least as empathetic to an audience as Reeves’ Kai. Kai’s adopted father, who is affected by magic and attacks a guest – an offence that demands seppuku, taking one’s one life – fulfils this role. You really need at least one of the 47 Ronin to display charisma, but they don’t.

There are other problematic elements. The best films about samurai show blood. Once you are appalled by death by the sword, the fight sequences have genuine tension. 47 RONIN is rated in the UK as ‘12’ – children under that age have to be accompanied by an adult. There is nothing in it to truly give them nightmares. Even a decapitation scene is bloodless. Then there are the fantasy scenes which don’t overwhelm us and seem, frankly, lame. There is a witch who turns into a serpent but she is not a very effective fighting machine. The point of Kai’s character is that he knows magic himself but does not use it until the end, which dramatically plays like a contrived ‘get out of jail free’ card. It also makes you think of Neo’s hidden power in THE MATRIX trilogy. NB: the three letter character name is obviously an homage.

The best set piece has the Ronin enter the haunted forest to acquire swords. Their leader must not draw his sword no matter what he sees or else all his men will die. This is the only sequence of director Carl Rinsch’s film that has any tension, though it does not strike you as particularly original.

Anyone who has seen Akira Kurosawa’s THE SEVEN SAMURAI (1954) knows what we expect from such a film – samurai as surly, rude and energetic, a live-wire, as embodied by Toshiro Mifune. I desperately wanted humour from the movie, but save for a sumo-like samurai who confessed to throwing stones at Kai as a child (man-boobs are inherently funny) comedy is in short supply. Some complexity in the warring Clans would also have been welcome. We get the ex-samurai eating humble pie, with a warrior given credit for killing a beast that Kai slayed, finally acknowledging Kai’s contribution, but the film definitely could have used more characterisation.

As for the 3D, I watched the film with 3D glasses over my own, nullifying the effect; nothing to wow me on that score. 47 RONIN will score low numbers before ghosting into DVD/VOD. You wonder whether Keanu Reeves’ career will have a Third Act, or whether his transformation from slacker dude to action hero ends at the latter.

Reviewed at Cineworld Trocadero, Shaftesbury Avenue, Screen Two, 15:15 screening, Tuesday 31 December 2013; a woman complained of seeing a mouse in the auditorium; staff were only compelled to act if it had a recording device