Film Review: A MOST WANTED MAN: A Most Impressive Film 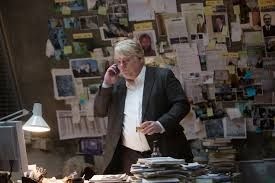 In A MOST WANTED MAN, Philip Seymour Hoffman plays Günther Bachmann, the head of a Counter Terrorist Unit operating in Hamburg. His team operates outside of German law. They scoop suspects or those aiding them off the streets and whisk them into discrete makeshift detention centres where they interrogate them without so much as the offer of a lawyer. Günther knows his methods are extra judicial. He drinks and smokes too much and doesn’t have friends outside of his small team. But he’s all about the big fish, using a barracuda to catch a shark. You stop terrorists not by going for their source of finance but by tackling the leaders. He knows not to trust the German Home Office or the Americans who sniff around at his leads but don’t have access to his informants.

Adapted from John Le Carré’s novel by the Australian playwright Andrew Bovell (best known for ‘Speaking In Tongues’ which became the thriller LANTANA), A MOST WANTED MAN is an intelligent film about counter intelligence. It is almost like a David Mamet play. To fight terrorism, you have to be certain of your moral compass – not killing innocent women and children – and, above all, to be trustworthy. Günther is after a very big fish indeed, philanthropist and builder of bridges Faisal Abdullah (Homayoun Ershadi) who uses charitable work as a front to raise funds for terrorist cells. Günther is half way towards proving the means by which Faisal finances these operations. He has a mole, Faisal’s son Jamal (Mehdi Dehbi) on the inside. When Jamal approaches Günther about quitting – ‘people are looking at me’ – Günther reminds him why he cares and gives him a close familial hug, held too long, the hug of an intimate family member or a lover, a hug that says ‘believe in me; I believe in you’.

A MOST WANTED MAN is best viewed not as a thriller but as a tragedy, achieved through a series of betrayals. Günther discovers a Chechen Islamist convert, Issa Karpov (Grigoriy Dobrygin), has wandered into his jurisdiction. Issa has inherited a great deal of money from his murderous father, held in a Hamburg bank. To get to it, he has to make contact with Tommy Brue (Willem Dafoe), the son of one of his father’s friends. He does so firstly by seeking refuge with Turkish immigrants and then through a civil liberties lawyer, Annabel Richter (Rachel McAdams).

So often in films about espionage, the storytelling gets lost in various twists. Here, the narrative is clear and easy to follow. We know what’s at stake, what is being demanded. The tension is whether those who are being coerced into doing something they personally would prefer not to do will be found out; whether they will notice they are being watched. Günther coerces first the banker Tommy, then the lawyer Annabel. He does so acknowledging that Issa is innocent. In a particular fine and nuanced performance, Hoffman gives the line real force. It is Günther’s conviction that persuades Annabel to help him, even as Issa develops feelings for her.

The film makes a powerful point about betrayal, in that it is most acute when it is carried out by people who appear to have cleared your name and absolved you of guilt. You realise that when you accept your pardon you are at your most vulnerable. When Issa removes his beard in order to alter his appearance, this too feels like a betrayal, an affront to his new found religion and the identity that finally matters.

A MOST WANTED MAN is the third film directed by photographer Anton Corbijn and easily his best. It has a moral spine. It asks whether through the act of personal betrayal, we lose the fight and drain our morality of feeling. This question is acutely embodied in Hoffman’s pained performance, a man who attends to details, handles people well and knows who not to trust. In a smaller role, Robin Wright, hair dyed jet black (or is it a wig) does sterling work as Martha Sullivan, the CIA agent who keeps Germany’s official anti-terror unit off his back. The film is mostly in English with attempts at German accents that work well, Hoffman integrating seamlessly alongside his co-stars Daniel Brühl and Nina Hoss. There is a brief but atypical chase sequence in the middle. For the most part, A MOST WANTED MAN is a slow build up to a cry of shame and a reckoning that we are not party to.