Film Review: BLENDED: Resistance is useless – well, for me anyway 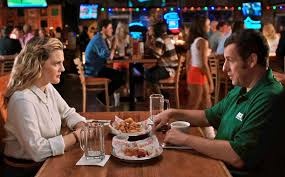 Whatever you think about him, Adam Sandler knows what works. He is a holiday comedian; that is to say in his most recent bunch of movies he goes on holiday a lot (GROWN UPS, JUST GO WITH IT). He plays the working stiff faced with everyday problems, keeping a marriage together, trying to do the best for his kids – over-protective and goofy by turns - even trying to start again. Moreover, he chooses as his leading lady a star with problems, like Drew Barrymore and Katie Holmes. He says, ‘stick with me - we could have a lot of fun.’

On the downside, his movies trade in exhausted clichés. In BLENDED, his latest holiday romance, with a family twist, a supporting character (Jessica Lowe) shakes her breasts from side to side every time she giggles. Much of the film is set in South Africa and presents the brochure version of the safari holiday complete with elephants, lions, a chorus led by Terry Crews, still waiting for that leading man break (damn, he’s been close) but not snakes – why didn’t it have to be snakes?

Every sinew in my being (well, maybe not my little toe – damn you, toe!) was primed to dislike BLENDED. The title describes a coffee not a family. But Sandler is a comedian-heart-warmer who pushes his schtick through the pain barrier; finally you are moved.

It begins with Drew Barrymore in the toilet – a statement of intent if ever you saw one. She plays Lauren, a wardrobe arranger with her own company, Closet Queens of Manchester. I know, gay subtext, let’s tickle you with that one. Lauren is on a blind date with Jim (Sandler), who works at Dick’s Sporting Goods (penis humour; I know) at Hooters, a sports-themed restaurant that specialises in waitresses who – isn’t it obvious? They are decadent immodest Americans in the cleavage emphasis business – at least that what their boss tells them if he had a Russian accent. Jim is so nervous he drinks Lauren’s beer while she is in the ladies’ room. After she chokes up the spicy chicken wings, he leaves her to get half the check. (We say bill in the UK, the French say ‘addition’ and the IMF asks ‘bail out?’)

Meanwhile, Jim goes home to his three girls. His eldest daughter, Hilary (Bella Thorne) is given a page boy haircut and raised to be a star athlete; with the film’s penchant for Pamela Anderson types, I’m surprised Jim doesn’t call her ‘Carb Wire’, but who remembers that movie? The middle daughter, Espn (Emma Fuhrmann) addresses an empty chair as if she thought Clint Eastwood was actually talking to President Obama during that 2012 election rally – she believes she is conversing with her mother – whilst the youngest, Lou (Alyvia Alvyn Lind) is the obligatory cute four year old.

Little to they know that this pair are linked by Lauren’s business partner, Jen (Wendi McLendon-Covey) who is engaged to Jim’s boss. When Jen finds out that the boss has five children, she bails, leaving Lauren and Jim to take up the opportunity of a romantic ‘blended’ family holiday to South Africa. (They don’t intentionally go together, but have to share the same quarters.) Apparently, it beat the Mall.

Now the movie South Africa has nothing to do with the real South Africa: corrupt President recently re-elected, his once famous protest party, the African National Congress, devalued; crime rising, the gap between rich and poor as wide as it ever was. The movie sells the safari experience. BLENDED offers no more clichés of Africa than the 2012 sex tourist drama PARADISE: LOVE set in Kenya, where rich vacationers were greeted with ‘hakuna matata’ and young Kenyans were on call as potential escorts. In that film, we little sense of the dreams of Africans; we only saw them through the vacationers’ eyes. In BLENDED, a sunnier, all-smiling, all-shaking, luxury affair, we get the same. I’m not sure the South African Tourist Board actually endorses riding an ostrich as is depicted here. Nor does it licence companies offering paragliding experiences that allow their jeeps to run out of petrol as also happens here. They approve of the stock shots of elephants, antelope and Marty the Zebra from MADAGASCAR singing ‘born free’ (well, the latter isn’t actually in the movie).

Jim and Lauren have to sort out their accommodation problems – Lauren and the boys get the vibrating heart-shaped bed – whilst Jim and the girls get bunks. Jim helps Lauren’s youngest son perform better at sports – the South African cricketer Dale Steyn cameos – whilst Lauren pays for Jim’s eldest daughter’s improbable make over; she is transformed into a girl with long hair who turns heads – who knew, I just want to squash them, well in the UK we call them ‘zits’.

Do you think this couple will get together by the end credits? Not if Lauren’s cheating husband (Joel McHale) has any say. He’s much like any cheating cameo husband – he has a hit TV show to go to in his down time (COMMUNITY). He’ll do anything to stand in Jim’s way, well, maybe not; there is that TV show.

How do you make a romantic comedy that also appeals to guys? You give it a big sports movie finish. BLENDED is no exception. I’m surprised the movie isn’t called WHACKED, but I think that has other connotations.

The movie will appeal to any working divorced parents who are searching for that second shot. OK, that demographic excludes the current US President and with his style of humour, Sandler isn’t going to get invited to the White House anytime soon. Still, older moviegoers with challenging childcare issues will relate; at the end of the screening I had a nice chat with Cheryl, who ‘didn’t think the movie was that bad’; ‘they didn’t go on the journey,’ she complained of the sniping journalists who congregated at the end of the movie to trade dismissive one-liners. (‘Jon Lovitz in GROWN UPS 2 was funnier.’) It has a good a shot of any Adam Sandler film of being a hit, though my laughter button wasn’t pressed at any time during the screening.