Film Review: DAWN OF THE PLANET OF THE APES: Apes together? Wrong! 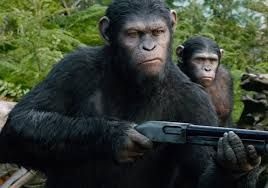 For reasons best known to himself Caesar (Andy Serkis), leader of an evolved group of apes, wears war paint, a red line between his eyes. He’s leading a bear hunt with his crew, which includes his right hand ape, Koba (Toby Kebbell) and his son. I’m sure how many apes a single bear would feed, but I think the apes in the movie DAWN OF THE PLANET OF THE APES would have a lot more problems than living alongside a bunch of humans, in a national park (or countryside) outside San Francisco. Shortage of chow would be a source of tension.

Set after human kind was been mostly wiped out by simian flu, a variant of Ebola, DAWN OF THE PLANET OF THE APES is the latest in a franchise that began in 1968 with PLANET OF THE APES, a film starring Charlton Heston as an astronaut who crash lands on a planet filled with bipedal apes – a case of ‘two legs good’, to re-write George Orwell’s ‘Animal Farm’ – and treat him as a scientific curiosity. The film, in turn adapted by a novel by the Frenchman Pierre Boulle, was in part a meditation on evolution – the missing link between man and apes, specifically what if that link wasn’t genetic but a case of learning. However, it was also another disturbing metaphor, discussing the relationship between black and white in society – African Americans verses their waspish counterparts. The first rash of PLANET OF THE APES films were a form of blaxploitation movie, giving African American audiences strong relatable ape figures with whom to identify. The film series morphed into a TV series in the late 1970s, which petered out, some time before race riots took place in Los Angeles.

Tim Burton took on the franchise in the early Noughties with a different agenda. He was fascinated with the apes as an articulation of the other. Burton’s films, from PEE WEE’S BIG ADVENTURE, through BEETLEJUICE, two BATMAN films, EDWARD SCISSORHANDS, ED WOOD and MARS ATTACKS, sympathised with the Emo, the weird-looking outsider with scissors for hands, a Penguin like demeanour, a penchant for expressing oneself through a Bat costume, a love of angora sweaters or Lukas Haas, grown up from his defining Amish kid role in WITNESS. His interest was in finding simian looking humans – Helena Bonham Carter and Paul Giamatti are both known for unusual physiognomy – and celebrating their behavioural tics. Burton’s coup de cinema was casting Charlton Heston, the protagonist of the first film, as an ape. The apes were broadly right-wing bigots; Burton’s film appeared when George W. Bush took to the White House.

In its third incarnation, the writers Amanda Silver and Rick Jaffa took their inspiration from Project Nim, the case of a family who attempted to raise a chimp as a child in their own home, attempting to teach it sign language and appropriate behaviour. (It was the subject of a 2011 documentary.) The re-boot RISE OF THE PLANET OF THE APES (released in the same year as PROJECT NIM) dealt with scientific experimentation gone wrong, apes banding together because of what humans threaten to do to them. Partly, the film is about the dangers of genetic modification, but it is also perhaps a metaphor for introducing democracy in countries that have deeper rooted values based structures, even if these values are not those that westerners may recognise. RISE OF THE PLANET OF THE APES was released shortly after the Arab Spring, based on a rejection of inherited autocracy from within (as opposed to from Western intervention); the filmmakers did not foresee that seismic change. They could by 2014’s DAWN exploit it.

So you could see the Apes as a variant of the Syrian opposition, maintaining a purity of thought (‘ape must not kill ape’) but affected by internal conflict. Caesar is representative of the Western-educated foreign language student, attempting to spread their values to his own people, a Fulbright or Chevening scholar. His philosophy is that the apes are better off without humans, but he won’t go to war with them. Trade, so much a defining part of civilization, doesn’t even come into it. The humans in the film, represented by a community leader, Dreyfus (Gary Oldman), distrusting right-wing bigot, Carver (Kirk Acevedo), caring family man, Malcolm (Jason Clarke), his emo comic-book loving son, Alexander (Kodi Smit-McPhee) and his nominal second wife, Ellie (Keri Russell), want to reclaim an asset, to get an electric dam restarted, so that they might have power. ‘Without it, we won’t last two weeks,’ says Oldman’s bespectacled leader – he’s short-sighted so he knows what he’s talking about. The apes have an initially fractious encounter with humans – apes have spears, but humans have guns. Apes, quite understandably, want an upgrade.

Caesar is the voice of moderation. He advocates the learning of sign language and rudimentary speech and relates to the desperation of the humans. However, the Apes first encounter with humans resulted in an ape being shot. His antithesis is Koba, a former laboratory monkey who wears his scars as a reminder: ‘humans did this’, he says pointing to a big gash, ‘human did this’, pointing to another gash, ‘but not this’, indicating where he cut himself shaving – alright, I made that last bit up. Koba wants to slaughter the humans whilst they’re weak. When Caesar allows the humans to fire up the dam, Koba sends an advance party to check out the humans, who are testing out their firearms like they don’t need every bullet. The humans have an armoury outside their fortified enclosure – that’s bad strategy.

Metaphors are further extended in later scenes when the imagery of both concentration camps and individuals trying to survive post Hurricane Katrina are evoked. It is fair to say that this new APES films keeps many of the resonances acquired by the seven previous APES films (PLANET, BENEATH, ESCAPE, CONQUEST, BATTLE, PLANET (2001) and RISE) and adds to them. It’s like a metaphor that keeps on collecting. The problem with a franchise with such serious intent is that the pleasures are all in bad behaviour – apes swinging into action and kicking butt. Our sympathies are equally divided between Caesar and Malcolm – this is a bromance of sorts defined by ‘trust’. However, the franchise has a problem: it cannot show humans being slaughtered indiscriminately. It just does not play well in Middle America. Flaming apes, however, are not a problem. So having unleashed the genie – strong identification with the other – out of the bottle, it cannot push it to its logical conclusion, humans being wiped out by the more evolved species.

The PLANET OF THE APES films don’t offer the pleasure of re-equilibrium; neither one side nor the other is destroyed. They show the struggle for accommodation. DAWN OF THE PLANET OF THE APES has some adrenaline pumping sequences, well marshalled by director Matt Reeves, but it isn’t in any sense a satisfying film, throwing up questions of human (tribal) behaviour and how we relate to each other.

Hollywood Movie Review - War for the Planet of the Apes Image Credit:wall.alphacoders.com â…