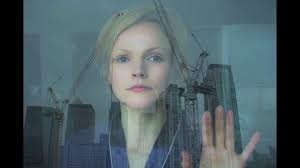 For my generation, Steve Reeves will always be Hercules, but in 2014 Hercules is being played by two actors, one of whom has the surname Johnson (Dwayne ‘The Rock’). Steve Reeves is also the name of the director of the independent British thriller, KEEPING ROSY, which boasts a score by Stephen Warbeck, photography by Roger Pratt and central performances by Maxine Peake and Blake Harrison. Whilst not internationally famous, in the United Kingdom they are a big deal, as opposed to half price chocolate digestives which is a Big Deal. KEEPING ROSY is not a film I can say too much about. The poster – white letters on a black background and a profile of Ms Peake – gives nothing away. The last time I saw that trick (black and white, no explicit imagery) was on the poster for DESTRICTED, which was, in the final analysis, decidedly pornographic.

KEEPING ROSY is about Charlotte (Peake) a London-based ‘something in the city’ who has a bad day at work. Not only does she not make partner, but she loses her job. She brings back some champagne and gets into an argument with her Eastern European cleaner, Mykala (Elisa Lasowski). The poor lady ends up dead, though there are surprisingly no stains. (Just as well really; how would she have coped?) In an intense, wordless beginning of Act Two, Charlotte has to get rid of the body – wraps it up in a sleeping bag, takes it to the river and dumps it there. Sorted! Only she forgot to get rid of the lady’s car keys. She goes to the car park, unlocks the vehicle and makes a shocking discovery that makes her re-think her ‘I’ve had a bad day but I can put this behind me’ tactic. She is ill-prepared for what happens next: an encounter with a sordid INBETWEENER (for those familiar with Blake Harrison’s oeuvre).

In the movie, Harrison’s creepy security guard, Roger (is there any other kind?) tells a brilliant story. A bloke has too much to drink and throws up over himself. ‘The missus will be furious. What am I going to do?’ he asks his mate, who, miraculously is still there. ‘Don’t worry. Come home holding twenty quid and tell her that a bloke throw up over you and gave you money for the laundry bill.’ The bloke comes home and faces his wife. ‘I’m sorry I look a state. A bloke threw up over me and gave me twenty quid for laundry.’ ‘But you’re holding forty.’ ‘The other was from the bloke who shat my pants.’

Believe me, that’s the film’s highpoint.

Charlotte fobs off her lover, who insists that he’ll help her get through it. Instead, she calls her sister, Sarah (Christine Bottomley) from up North to help deal with the problem. ‘Cor, you got a flash pad. Look at that. City view, your own balcony and the lifts aren’t even vandalised.’ The refrigerator contains a bare minimum of food; not even milk for a cup of tea (I imagine the character drinks cinnamon and elderflower). Being in the company of Sarah brings out the family feud. ‘You weren’t there when Dad was dying.’ ‘I paid for the funeral.’ Sarah paid for the screaming.

Charlotte doesn’t realise she has CCTV until Sarah tells her and then logic falls apart. She needs to destroy the recording. So she goes to visit the guard house and is just about to locate the recording when Roger turns up. ‘Got a problem with vandals, have you? You have to report it to the police and then we can do something about it.’ He then turns into a nasty little blackmailer who is not above sitting in Charlotte’s kitchen, drinking champagne, eating fish cakes and chips and having sexual relationships with her sister. He wants £30,000 cash, the car and a dirty little snog or else he’ll go to the police. Meanwhile, the body has turned up and is assumed to be the victim of sex traffickers.

The film reaches an almost morally acceptable ending but you do think, what’s the point? You could say it is a showcase for Ms Peake, who is shown in an unglamorous light; a tense contraction of facial muscles, worried ‘more than’ signs about the eyes. I only wish the commitment to realism extended beyond her facial expressions. I didn’t believe she could lift up a body, unless of course KEEPING ROSY is her audition tape for STRICTLY COME DANCING (the UK version of DANCING WITH THE STARS).

After prolonged exposure to Northern accents, I left t’cinema thinking ‘bloomin’ ‘eck, what’s that about? Did they really think people would pay good money to see summat they might see on t’telly?’ The funny thing was, as I left the film’s London premiere (at the Hackney Picturehouse), I didn’t hear a single regional accent. It was all ‘received pronunciation’ let down by shoes on t’row in front of them. No class!

With thanks to the good people of Film 3Sixty Magazine; reviewed Thursday 26 June 2014, Hackney Picturehouse Screen One, 19:00. It were raining.