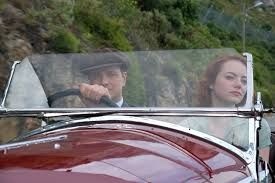 Woody Allen has been asking the same questions in his movies for years. ‘What if there’s no God? You go round once and that’s it. Everything can be explained by science except my tax bill which is inordinate. Thank goodness I give myself $1 million a picture – and a free holiday, deductible of course.’

This prompted a thought of my own. If you keep posing the same question, why do you expect a different answer?

I know from the film, WOODY ALLEN – A DOCUMENTARY, that the seventy-eight year old writer-director and occasional actor keeps his ideas in a drawer and pulls them out when it comes to that fortnight when he is due to knock out another script. What I suspect he does is he puts them back in the drawer again. ‘What is this? God is silent. I can do something with that.’

If you listen to his films, you say to yourself: it’s a pity that everybody else has to talk.

I have this theory that he didn’t remake SEPTEMBER with a mostly new cast because he botched it the first time round, but actually because he forgot he made it the first time. I imagine Mia Farrow tried to tell him, but they lived in separate apartments, so it couldn’t have been easy.

MAGIC IN THE MOONLIGHT plunges us into the world of magicians, mediums and monotony that is oh so familiar from anyone who has seen his movies. Allen’s last leading role in one of his film was as a magician in SCOOP (2006) and a medium featured in YOU WILL MEET A TALL DARK STRANGER (2010). The monotony turns up in every other film, though it occasionally broken by a mesmeric turn by Cate Blanchett (BLUE JASMINE, 2013) or some occasionally funny sight gags (MIDNIGHT IN PARIS, 2011).

This time, Colin Firth is cast in the leading role as curmudgeonly conjurer Stanley Crawford, whom we first see in late 1920s Berlin in Chinese attire. For years, he has been performing as Wei Ling Soo, a man who can make an elephant disappear – simply by informing him that there are two versions of THE JUNGLE BOOK currently in production.

Stanley has no joy in his life – his fiancée Olivia (Catherine McCormick, blink and miss) wants to holiday with him in the Galapagos Islands, where I guess he can finally take off the costume. Stanley gets a better offer from his friend, Howard (Simon McBurney) to travel to the South of France to unmask a seemingly impressive medium, Sophie (Emma Stone) who has the most astounding ‘mental impressions’. (Allen seems to think the phrase is funny and repeats it endlessly.) Sophie has particularly charmed a rich American widow, Grace (Jacki Weaver) and her son Brice (Hamish Linklater) who at one point plays a ukulele without a shirt. (I start to wonder whether at $5,000 a week, the going rate for appearing in an Allen film, Linklater felt he was being exploited.) Sophie gets the impression of the Orient when she first meets Stanley, who pretends to be in ‘import export’. Stanley, impressed, denies it.

By the time Stanley sees Olivia perform at a séance to contact Grace’s late husband and a candle rises in the air, he becomes a believer, suddenly open to the possibilities of life – he embraces being wrong and (to cut a long story short) invites the press to hear him pronounce Sophie, from Kalamazoo, Missouri as the ‘real thing’. Of course, he falls in love with her. The ‘joke’ is that he expects her to give up Brice and live with a cantankerous middle aged boor who may have read Nietzsche but doesn’t know any of his songs.

When Kenneth Branagh appeared in Allen’s CELEBRITY, he made the mistake of imitating the mannerism of the director as a way of playing the dialogue. Firth imposes English rhythms on his lines, stressing arrogance and certitude. Towards the end, Stanley reaches despair and Firth gives Allen’s words real weight and plausibility, until that is – well, I won’t spoil it. Firth has fine on-screen chemistry with Eileen Atkins, who plays his dear aunt Vanessa. When they dance together, you wished the film would turn into Allen’s version of THE MOTHER, with Firth and Atkins in roles formerly played by Daniel Craig and Anne Reid (check it out). Stone gives an agreeable performance, but her character has no moral compass or a sense that her gift might be a curse.

I guessed the big reveal half way through and experienced pleasure being proved right. As for the rest of the movie, it is unspeakable. Scenes go on too long and when there is a sudden thunder storm I worried more about the vintage Aston Martin car than the characters.

Marcia Gay Harden plays Sophie’s mother and I started to worry about what would happen to her at the end of the film. There’s a resolution but she isn’t part of it. The film is virtually sexless – characters would rather jump in the pool. ‘You’re a better swimmer than I imagined,’ Sophie tells Stanley. How I wanted him to say, ‘yes you should see me in a wet shirt.’ As for Allen’s metaphysical questions, surely he has figured out by now that they cost him at the box office. ‘You do something to me’ features on the soundtrack but I was unaffected.

Movie review: THE FAVOURITE - The Comedy About The Monarchy Of England

Movie review: THE FAVOURITE - The Comedy About The Monarchy Of England - Photo credit:imdb.com,editi…