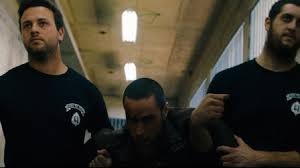 In the Occupied Territories-set drama, OMAR, the titular character (Adam Bakri) is a young baker who by day scales a massive wall that separates him from his schoolgirl girlfriend, Leem (Nadia Lubany) who lives on the other side. Omar is accustomed to being stopped by Israeli police – he does break a law by refusing to pass through checkpoints – and is made, in one humiliating instance, to hop on one leg while the police deliberately pay no attention to him. He participates with his two friends Amjad (Samer Bisherat) and Tarek (Iyad Hoorani) in an attack on Israeli guards, but then gets picked up. Rami (Waleed Zuaiter), a bilingual Israeli agent wants him to give up the friend responsible for the attack, and releases him from custody. Omar is in a no-win situation.

Director Hany Abu-Assad’s follow up to his suicide bomber drama PARADISE NOW (2008), is an absorbing ticking time bomb of a thriller where there is no happy-ever-after outcome even remotely on the cards. Omar represents the kind of Palestinian that you might imagine the Israelis would want to negotiate with: he just wants to live his life and is not radicalised by actions of the past. The problem watching a film like OMAR, being far away from the struggle for a Two State solution stalemated by mistrust on both sides, is that you cannot judge the characters by any conventional measure of right and wrong. Abu-Assad makes us empathise with Omar, but he still participates in a killing and surely cannot expect mercy.

We know, of course, that there are few reported cases of Israeli soldiers arrested and tried for human rights abuses; so there is no conventional justice system that bullied Palestinians like Omar can refer to. When watching – and reviewing – OMAR it is impossible not to refer to the world outside the film at the expense of the drama within it; the circumstances that Palestinians endure displace any film made about them and occupy one’s thoughts and feelings. I am sure, however, that Israelis defending the right of Israel to exist can say the same thing, but when you watch an Israeli film like FILL THE VOID, you don’t think about the politics.

For the 97 minutes that we are in the cinema, we root for Omar; that somehow, someone is going to cut him a break. Would it be true to the situation in the Middle East for that to happen? The ending shows the dangers of zero sum games to powerful effect.