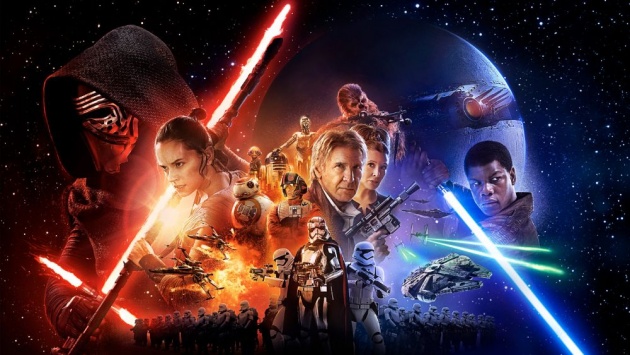 I am keenly aware that the world doesn’t need another review of Star Wars Episode VII – The Force Awakens. Nevertheless, I don’t want to be snobbish about it. Quite the reverse! I saw co-writer-director J J Abrams continuation of the Star Wars saga twice in one day (at an 11:00am screening in 2D and 07:30pm screening in 3D) and I can honestly say it bears instant reviewing. Could I watch it again as I watched the original Star Wars film seven and a half times some thirty-eight years ago? Probably!

Star Wars was my first immersive cinematic experience (aged 12) when it captured my imagination and delivered on the original hype. There are parts of it that are quite dull, mostly involving Mark Hamill’s Luke Skywalker in the desert, but these are offset by the rest of it. What’s not to like about a film in which a background shot has a droid (that’s a robot to non-Star Wars fans) piling up dead Jawas (desert dwellers) to burn them. (This is a kids’ film, boys and girls.) Those of us who love Star Wars – the original trilogy (1977-1983) enjoy the dark comedy stylings of chief villain and absentee father, Darth Vader, the Luke-Han-Leia love triangle, Chewbacca the (200 year old) Wookie, a pair of robots based on Stan Laurel (R2 D2) and Oliver Hardy (C 3PO) and state of the art (for 1977) special effects. I saw the film so often as a boy that I memorised the dialogue almost entirely – I can’t say I did the same for The Empire Strikes Back (1980) and Return of the Jedi (1983), which cost me dear at a recent Star Wars-themed movie quiz. (I came second to last.) And by Star Wars-themed, I don’t just mean they played the music – oh, wait, they did. I learned incidentally that the Cantina Band music is known as Jizz. I thought Jizz was - never mind, younglings might be reading.

So what about The Force Awakens – is it what at least one person has called fan fiction? Certainly, the way in which one character from the original trilogy is treated – and I hated that scene, the way it was written, acted and directed – you might conclude that it is. Yet if it isn’t an attempt to expand the Star Wars universe in terms of new planets, trade disputes and cameos from another movie -E.T’s appearance in the prequel The Phantom Menace –I mean, how many times can one return to Jakku – it embraces modern themes. Child soldiers, the smuggling of endangered species – raptars – fighting the desire to be good. These are all features of the screenplay by J J Abrams, Lawrence Kasdan and Michael Arndt. The only thing that Abrams doesn’t do is spell out why the universe is at war and why the First Order fears Luke Skywalker so much. Do they really think he’s somewhere in a distant galaxy amassing an army, as opposed to turning himself into Oliver Reed.

I genuinely felt for Mark Hamill at the now iconic first script reading of The Force Awakens prior to the start of principal photography. All that build-up! I reckon at that reading, Abrams suggested Hamill read the introductory crawl – Peter Mayhew couldn’t break character – unless he got Kathleen Kennedy (producer) to do it.

For those who require a plot synopsis, The Force Awakens is about a droid with secret plans stashed in its memory that ends up being left on a desert planet and is found by a young orphan. Yes, it’s Star Wars. The difference is that the droid, BB 8 is found by a young woman, Rey (Daisy Ridley), a scavenger on the aforementioned Jakku, who discovers that she can feel the Force. Is she related to one of the main characters? There are clues in a flashback sequence – a flashback in a Star Wars movie, that’s new – that she might be connected to the chief villain, Kylo Ren (Adam Driver in a welder’s mask – Abrams’ homage to Flashdance? What a feeling, indeed). At any rate, the Star Wars films are not great adverts for parenting.

But where does ex-stormtrooper Finn (John Boyega) and the resistance’s best pilot, Poe Dameron (Oscar Isaac) fit in? Finn finds that she cannot slaughter innocents. He has a conscience – or maybe he was expected to work without pay after his employer messed up setting up his personal record. (That happened to someone close to me – and they didn’t fix it in time for Christmas.) Poe is trying to find secret plans that reveal the location of Luke Skywalker’s retreat. (Will they spoil it with tourism?) In the course of Finn’s defection from the First Order, he helps Poe escape, crash lands on Jakku and meets Rey. The First Order isn’t slow to find them.

The fun of the film is in catching those little homages to the original trilogy. Remember that robot that Chewbacca scares in the original Star Wars? It turns up in the first five minutes of this. The Force Awakens is the sort of film where the sets create a sense of foreboding. Interior design hasn’t changed much in thirty years since the original Star Wars trilogy, unlike in the real world...

The blend of continuity and difference draws us in. I can’t say I was excited by the space battles but I mentally whooped (if that’s possible) when Han Solo (Harrison Ford) and his Wookie sidekick Chewbacca (Peter Mayhew) turned up in an unexpected way. Once Han appears, he virtually takes over the film, providing it with wit and energy, though occasionally he did things that I didn’t think Han would do – borrowing Chewbacca’s iconic crossbow, at one point, and marvelling at the way it shoots.

The villains of the piece are the mysterious Snoke (Andy Serkis) who is the Emperor Palpatine equivalent – he wants to rule the universe with a virtual iron fist – Kylo Ren, who has anger management issues and General Hux (Domhnall Gleeson) who addresses the troops in an homage to Leni Riefenstahl’s Triumph of the Will, itself one of the influences on the look of the original Star Wars. Incidentally, does a General in a galaxy far, far away, really need to give a rousing speech? He could just send an email.

George Lucas loved racing and ethnology. J J Abrams loves pop culture and dynamic heroines – or should that be Massive Dynamic heroines (see Fringe). That’s the difference between the two directors. Abrams is great with multiple character storylines, as exhibited in his TV work (notably Lost) but he doesn’t create original spectacle. There is a reason he ceded responsibility for directing episodes eight and nine of the Star Wars saga to Rian Johnson and Colin Trevorrow respectively. (Yes, he wants a life.) Quite apart from that sequence in the final third, there is also a reason Abrams puts off reintroducing Skywalker – it is because he has a tendency to stop the movie dead. Wait, that’s the weird fantasy sequence in The Empire Strikes Back. (Thank you for pointing that out, Seth MacFarlane.)

It is great to see the actors Ford, Carrie Fisher, Mayhew and Hamill back in familiar roles – Anthony Daniels’ reappearance as C-3PO is also inspired. Our nostalgia is complete. There is even an Admiral Akhbar lookalike and a pilot from Return of the Jedi who hasn’t aged a bit. Ridley and Boyega are terrific additions to the Star Wars fold. Isaac plays Poe as a Han Solo-type figure in waiting. The jury is out on Adam Driver, though he does have one subversive Star Wars moment when he takes off the welder’s mask and reveals – well, I’ll let you find out. In one of the weirder touches, Lupita Nyong’o plays a bar owner who is a lot like Edna Mode from The Incredibles, suggesting that maybe its director Brad Bird should have been invited to the Star Wars selfie. (Nyong’o utters lines in the trailer about ‘the Force is calling to you, let it in’ that are not in the finished film.)

At time of writing (25 December 2015) The Force Awakens has already grossed $813 million worldwide, making good on Disney Studios’ investment to buy the rights to George Lucas’ characters for over $4 billion. It has captured the public’s imagination, both by prevalence – try finding a cinema not showing it – and by entertainment value. Yet at both screenings I attended, there wasn’t the same overwhelming enthusiasm reflected in the numerous reviews, tweets and Facebook posts that fill the internet. Perhaps this is because it isn’t a younger audience’s nostalgia. It certainly doesn’t reinvent cinema as the original Star Wars did – or Alien, E.T., Toy Story, Titanic and Avatar did afterwards, as examples of event cinema that took the blockbuster forward. Yet let’s be thankful that Abrams didn’t succumb to lapses in taste and a tin ear for dialogue that Lucas showed in the prequels, The Phantom Menace, Attack of the Clones and Revenge of the Sith. He knows that, when it comes down to it, he wants to give us the Harrison Ford holiday special. The actor delivers.

Pictured: Nanisca (Viola Davis), fearsome general of the Agojie in a scene from the historical actio…