Film Review: THE EXPENDABLES 3: Not much creativity expended here 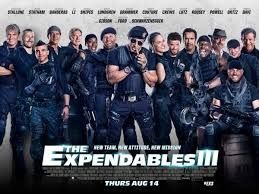 How dumb is THE EXPENDABLES 3? Early on, CIA suit guy Drummer (Harrison Ford) tears a strip off Expendable in Chief Barney Ross (Sylvester Stallone) after an attempt to capture an arms dealer (Mel Gibson) ended up with one Expendable in the hospital. ‘You fouled up,’ scowls Drummer. ‘You let him get away. Months of intelligence wasted. You got one of your guys sent to the hospital. You went in like a bunch of amateurs, guns blazing. You’re supposed to be professional. You compromised our entire operation. You’re an embarrassment. You come to a meeting smelling of sweat and cheap cigars. You have a ridiculous pinky ring.... I’m going to give you another chance.’

OK that’s not his exact speech, but it ends that way. Surely there is another bunch of mercenaries (perhaps led by Steven Seagal or ‘Rowdy’ Roddy Piper) who could do it better. No, for the sake of poor plotting, Ross and his team of ageing action heroes (plus Jason Statham as token Brit Lee Christmas) are sent back in the field with an increased budget and some more conveniently produced intelligence, that allows them to fly into Eastern Europe undetected (tell that to the families of the passengers of flight MH17), to get Conrad Stonebanks, a man wanted for war crimes and not, as I first thought, for supplying bad coffee.

THE EXPENDABLES 3 is its own peculiar style of awful. The gimmick is that having been given the OK to do so, Ross doesn’t want to take the Unintelligibles (which should be their name) back into the field. ‘I signed on for the whole ride,’ protests Christmas. ‘Ride’s over,’ growls Ross. Agreed, it was over at EXPENDABLES 1 (2010). Instead, Ross trades in his former co-stars for younger models (among them Kellan Lutz, John Ortiz and Ronda Rousey) the idea being that because they have youth on their side, they are more expendable.

For about forty minutes, I thought the film was about the dangers of trading your wife for a younger model. The kids get captured – not exactly a spoiler, it’s in the trailer – so Ross has to go back alone. ‘You fouled up. You got your team captured. You let him get away. You compromised our entire operation. You still smell of sweat and cheap cigars? When did you last wash your hair? ... I’m going you another, other chance.’

I’m surely Harrison Ford was given this speech and replied, ‘As I said to George, you might type this crap, but I’m not going to say it.’ He does however utter lines about not being able to understand Jason Statham. I don’t understand Statham either – he’s better than this.

Drummer’s main cautionary words to Ross are, ‘you look like you might have a stroke.’ Yes, an ego stroke! Name above the title, story and screenplay credit, but, Sly, the film doesn’t wash. Ford is extremely uncomfortable in the role. At one point, Drummer exclaims to his driver ‘change of plan’ and we next see him flying a helicopter – not exactly a spoiler, it’s in the trailer. I was hoping he’d high tail it out of there. That would have been my change of plan.

You may ask what Kelsey Grammer is doing in this dross, wearing a beanie hat. He’s an X-Man for goodness sake! He plays Ross’ talent spotter, who introduces him to (among others) a street fighter (Lutz) and a female bouncer (Rousey) who tackles rowdy customers in spaces that conveniently open up for her. ‘Men,’ she hisses, which is the beginning and end of her characterisation. At the end of his stint, Grammer’s character explains, ‘if it’s all right, I would like to be paid now.’ Not opting for percentage points of the gross – very wise.

EXPENDABLES 2 had a wild card, Chuck Norris, who transcended the awfulness of the 2012 sequel. This time, Antonio Banderas, Stallone’s co-star in ASSASSINS (1995) lights up the screen as a mercenary who wants to get back in the game and masquerades as a younger man – he can do parkour, well, his stunt double can. He is the only actor who checked his ego at the door. Everyone else is so serious, so macho, but Banderas is like a Spanish jumping bean, an autistic, can’t-stop-talking guy, who experiences pleasure at every morsel of acceptance. He reminded me of the advice given to Dustin Hoffman: ‘why don’t you try acting?’ Yes, action heroes should try to project something besides, ‘you know I can stop blinking for thirty seconds while the camera zooms into my face.’

Wesley Snipes makes a less than successful return to an ‘A list’ project. As Dr Death, a mercenary captured by a private army, he is rescued by the Indistinguishables (which ought to be their name) in the opening minutes. He shaves his beard off with Christmas’ knife – there is a pun about ‘the knife before Christmas’ (could do better) – and for about ten minutes, he appears to have juice in the tank. But the script ensures that the mute button is switched on. There is the inevitable reference to his off-screen problems (referring to be jailed for ‘tax evasion’) but he blends into the bland surroundings.

Snipes is not the only former A-lister on the redemption trail. Gibson equally has something to prove, with an even longer list of off-screen problems not referred to in the script.  (THE EXPENDABLES producer is Avi Lerner, and he understandably won’t make light of anti-Semitic rants, nor should he.) Gibson’s Stonebanks doesn’t have much of an entrance. Ross is shocked to see him, but we’re not. Gibson’s first comeback film was last year’s MACHETE KILLS. In this, he looks in better health, and the energy comes back into his performance before the end. The film concludes with the cliché of clichés: let’s drop our weapons and beat each other up. The script vibrates with bromance. When Stonebanks is briefly in Ross’ custody, he says, ‘when I kill you, I’ll do so with my bare hands because I want you to feel what I’m feeling now.’ I actually wondered whether Stonebanks was doing something with his hands in cuffs whilst talking. (Cupped palms on his lap – I’ll let you imagine.)

The director Patrick Hughes has one flourish. There is a long shot of a helicopter landing perfectly. You expect him to sustain it, but then it cuts to a medium shot of the cast getting out. You realise it is because the cast were not available for the earlier shot. Well, if they don’t turn up, why should we?

To say that THE EXPENDABLES 3 has underperformed at the box office is putting it mildly. Part of the problem is that it was leaked online (not something I approve of) before its cinema release. But Stallone’s idea of foreign policy problems – there is also a scene in Mogadishu, Somalia - is both hopelessly dated and out of touch (his killer line is ‘I am The Hague’). The franchise is effectively over, the bloated cast list, including Arnold Schwarzenegger, who wanders around unshaven and utters ‘let’s get to the chopper’ with some degree of self-parody, signifying an even bigger group of people who survive by the end credits. Stage directions, like wishful thinking, are thrown into the dialogue. (‘Let’s pick up the tempo.’) My favourite was when one character is told that his signal jammer will only last twenty-five minutes before a timed explosion will take place. 25 minutes for the finale, that’s extremely reassuring for one’s bladder.

Terminator Franchise: The TERMINATOR-Photo credit: edition by Amber255 via bitLanders THE TERMINATOR…