Film Review: THE SPECTACULAR NOW: no, live for the future 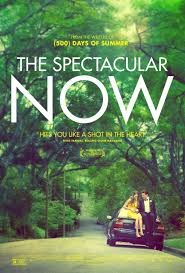 If there were any justice in the world, THAT AWKWARD MOMENT wouldn’t be advertised on buses and rest rooms. (Rest rooms – how can you get any rest when there are people pounding on the door?) THE SPECTACULAR NOW would be publicised instead. This is one of those pertinent movies about young people that feel real. It’s about a charming High Schooler, Sutter Keely (Miles Teller) who lives a charmed life, except for the alcoholism and the not so great grades, who gets dumped by his girlfriend because she thought he was cheating on her. Here’s the WT (Whole Truth). He was hoping to hook up his BF, a virgin, with some girls. He drives along, sees some young ladies in the outer lane and shows them the booze. It’s picnic time. BF goes out with one of the girls on a lake. Sutter is talking to the other, just talking. Then Cassidy (Brie Larsen) shows up. He is so boustard, like that’s even a word. He doesn’t take rejection well, or alcohol for that matter. After a night out of it, he is discovered on the grass by a plain young girl, Aimee Finicky (Shailene Woodley) who is doing her mother’s paper route. ‘Can I accompany you?’ Sutter asks, alcohol shifting about his brain like an air bubble trapped under sticky plastic. ‘I mean, I could help you out and you could help me find my car, wherever that is.’

Sutter is a charismatic guy and not full on. But he doesn’t realize that other people think he’s a joke. He has no prospects. He drinks on the job. His ex is dating a jock, who comes into his store. Sutter actually expects a beating. The scene has an edgy vibe: ‘I’m embarrassed I’m dating a girl who dug you’ verses ‘what the F - she sent you to like intimidate me because I still want to talk to her?’

Teller has just been cast in the FANTASTIC FOUR reboot. You hope the franchise won’t kill him. He reminded me of a slightly more charming John Cusack, which now that Cusack is playing sleazoids isn’t hard. Woodley looks like the follower in a gang, or a potential Sandy in GREASE. She is completely un-neurotic and the only thing holding her back is her mom, preventing her from going to college. Sutter doesn’t know his father and pesters his mom (Jennifer Jason Leigh) for his whereabouts. He eventually wheedles information out of his sister (Mary Elizabeth Winstead) and goes to visit him. How does that turn out? Dad is played by Kyle Chandler. He is not exactly a stand up drunk, but let’s just say he can’t pay the bills and when alcohol takes him, it takes him.

THE SPECTACULAR NOW is adapted from the acclaimed book by Tim Tharp by Scott Neustadter and Michael H. Weber, who wrote (500) DAYS OF SUMMER. There is no smart-aleckness here. The director is James Ponsoldt, who seems fixated on alcoholism – his last film was SMASHED, featuring Winstead as an alcoholic teacher. The creative talents out-do themselves here. Sutter Keely is a great character. Here’s a guy who isn’t the traditional ‘live in the moment’ sort. He doesn’t want to hurt people. He is not knowingly irresponsible. He found a self-image that made sense and said ‘cut, print’ without thinking maybe he needs to grow a little. When he lets Aimee go, he does so out of a sense of responsibility, but then he takes a look and thinks, ‘maybe I’m worth it’ and does the climax of MANHATTAN thing.

Recently released on DVD in the US, which I understand is on the way out as a way of consuming movies, THE SPECTACULAR NOW is a responsible film about youth that doesn’t feel preachy. It achieves a rare and delicate balance. There’s no real melodramatic ‘movie’ stuff, but it’s not gritty realism either. It just gets to you.

Michael Jackson: The Experience — dance with a legend