"Gulliver's Travels" is not only a fantastic storybook but it has also serious implications. At the deeper level, this work shows the moral crisis of a nation. Through satire, Swift shows gross corruption prevailing in human society. Thus, it serves as an insight into the universal aspects of humanity. It was written to promote self-knowledge that would lead to right action. In one of his letters to his friend, Swift wrote: 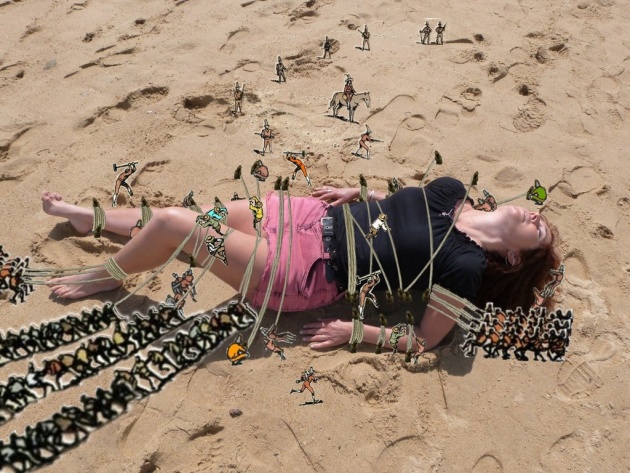 "I have finished my travels. They are admirable things and will wonderfully amend the world."

Gulliver's voyage to Lilliput can also be appreciated on two levels, internal and external. The external meanings are just for reader's pleasure. It is interesting because it has an ample feast for kids. The internal meanings, which are symbolic, are for serious readers. In its internal meanings, it is a serious criticism on four aspects of man's life i.e. physical, political, intellectual, and moral. It expresses a grave situation of human follies, vices and stupidities. 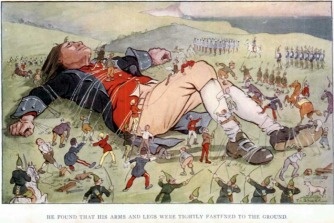 Gulliver, a surgeon on a ship, makes a voyage to the South Sea. His voyage seems to be prosperous at first but soon the ship was overtaken by a violent storm and it gets wrecked. Most of the sailors perish in the sea. Gulliver is able to swim ashore. Feeling exhausted, he falls asleep near the seashore. When he wakes up, he finds himself bound with chains and surrounded by a crowd of human creatures who are six inches in height. This is a strange dreamland for Gulliver. 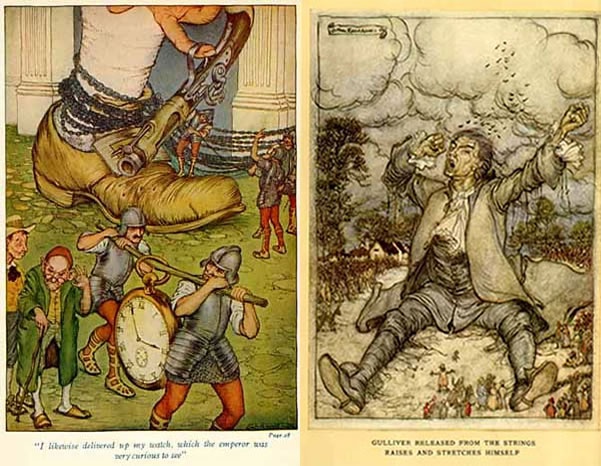 Gulliver is a giant and an utter stranger to them. They fasten him in chains and several ladders are applied by the Lilliputians in order to provide him food and drink.

Lilliputians are excellent mathematicians and they devise an excellent-method of taking Gulliver to the metropolis by a huge carriage. In the metropolis, Gulliver becomes an object of curiosity and people come from far and near to have a look at him. The king decides not to put him to death but to treat him properly. Arrangements are made to teach him the Lilliputian language. He is given the name, "Man Mountain". 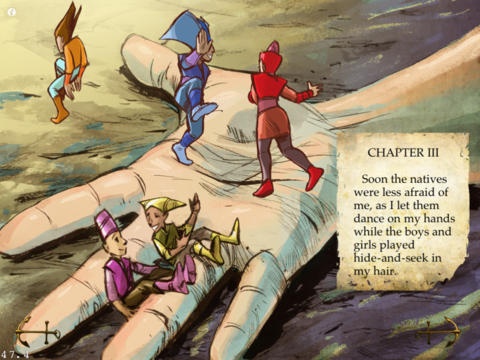 “Gulliver's Travels" is an allegorical work. An allegory conveys its meaning in a veiled and hidden manner. In voyage to Lilliput, we find a clear exposure of different categories of people like kings, queens, politicians, lawyers, physicians, scientists, writers and many others. 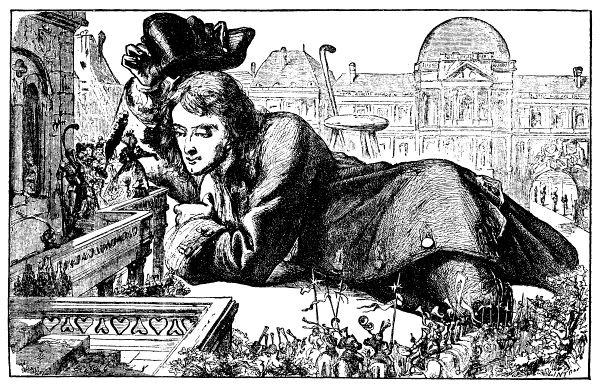 Flimnap, the treasurer in Lilliput, is the allegorical representation of Sir Robert Walpole. Dancing on a tight rope represents Walpole's skill in political and parliamentary intrigues. Creeping under a stick represents the sycophancy of king's favorites. The three fine silken threads, which were awarded as prizes to the winners of different contests, referred to various distinctions conferred by the English king on his favorites. 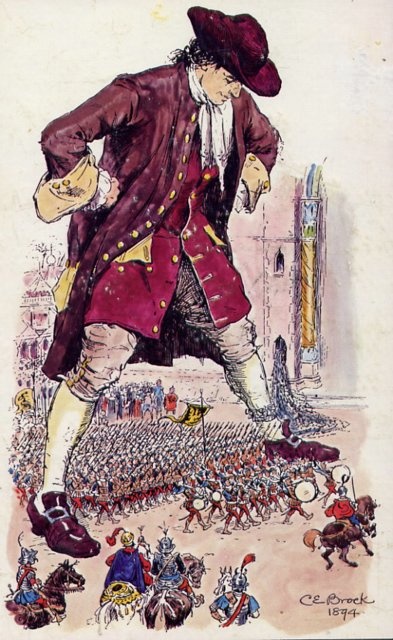 A civil war is waged between the Big Endians and the Little Endians on the vital issue whether to break a boiled egg at the big end or the small end. In these disputes, one emperor lost his life and another his crown. The two emperors are obviously Charles I and James II.

"It is computed that eleven thousand persons have, at several times, suffered death"

In this way, Swift successfully exposes the follies of the English nation. David Daiches has rightly said:

"Lilliput is made utterly contemptible by the small size of people who exhibit the same vices and follies as the England."

At royal court of Lilliput, Gulliver extinguishes a fire in the empress's apartment by urinating upon it. He is not forgiven for this:

"The empress, conceiving the greatest abhorrence of  what  I  had  done,
removed to the most distant side of the court, finally resolved that those
buildings should never be repaired for her use,  and  in  the  presence  of
her chief confidants, could not forbear vowing revenge."

This incident has been interpreted as Queen Anne's disgust with Swift for having written "A Tale of Tub". As a result, The Queen had refused to grant the office of bishop to Swift.

Swift ridicules and satirizes the system of justice in Lilliput. The judges are not eager to consider the merits of the cases. Swift condemns lawyers too. He considers them the most and filthy generation who knew the art of proving by words that white is black and black is white.

Some of the customs of Lilliputians are of great amusements. For instance, their method of burying the dead with the head downward is based on absurd idea:

"They bury their  deads  directly  downward  because  they  hold  an   opinion,
that in eleven thousand moons they are  all  to  rise  again,  in  which  period,
the earth---which they conceive  tube  flat -- will  turn  upside  down;  by  this
means they shall, at their resurrection, be found ready standing on their feet."

The people of Lilliput do not recognize that a child has any obligation to his parents for bringing him into the world.

In Lilliput, all the crimes against the government are punished with utmost severity. Those who obey the laws are awarded. Education is free for children and they are taught all the virtues,
which can play an important role in their personality building. Lilliput holds our attention throughout and makes us eager to visit.

Although the surface of the book is comic but at its centre, there is tragedy. Swift forces us to look into stupid, evil and brutal heart of humanity.

In Lilliput, Gulliver becomes the absolute weapon of the emperor whose only wish is to seize all the remaining ships of the enemy and make him monarch of the whole world. The spirit of opposition governs the world of Lilliput.

Lilliputian’s life has a dual standard. There are public nurseries in every town where children are brought up and encouraged to adopt the virtues of justice, courage and modesty but the children of laborers are not given the opportunity because their business is only to plough. Therefore, education is not thought to be necessary for them.

Ingratitude is regarded as the capital crime in Lilliput. Perhaps the king himself suffers from very crime without any scruple. Several suggestions are given to put Gulliver's degrading death such as his house to be set on fire and poisoned arrows to be shot into his face and hands. However, a minister gives a suggestion that blindness is an appropriate punishment, for on blinding Gulliver; he still, however, be beneficial to the king and Lilliput.

To conclude, we can say that writing Gulliver's first voyage is highly important and significant. Here, Swift's main aim is to satirize the political, moral and judicial conditions of England in 18th century.