Forever Young: Revolutionary Change and Stalemate in the Modeling Industry

“So I look at beauty and I think of young girls. Beautiful,” said Ashley Arbaugh, model scout and protagonist of the film Girl Model. A bold statement when spoken aloud, it is still a common belief amongst many in the fashion industry today. But a changing society has demanded something different of the fashion industry. In early 2012, model Sara Ziff formed The Model Alliance, a non-profit organization dedicated to improving work conditions in the US fashion industry. The mission statement on modelalliance.org highlights the issues surrounding the fashion industry including child labor, financial transparency and the need for an industry code of conduct to protect models.

However, the issues of underage and underweight models seem to be the current focus. In an article for BBC, Ziff said, “The prevalence of unusually thin models on the runway is well known. What's less well known is that for a long time the industry has relied on a labour force of children, and they are valued for their adolescent physique.” The Model Alliance, though by no means law, has mapped out the guidelines and current labor laws for working models. In addition, The Model Alliance serves as a resource for counseling and empowerment for models of all ages.

Prior to the formation of The Model Alliance, the Council of Fashion Designers of America (CFDA) created a Health Initiative in 2007 to serve as guidelines in an attempt to change industry practices, noting “Designers share a responsibility to protect women, and very young girls in particular...”  It would seem that the industry has also taken a step in the CFDA’s direction. Fashion powerhouse, Vogue, developed a 6 point pledge for all 19 US and international editions, vowing to "work with models who, in our view, are healthy and help to promote a healthy body image" One point in the pledge states, “We will not knowingly work with models under the age of 16 or who appear to have an eating disorder.”

While these initiatives have served as guides for designers, agencies and models alike, implementing them has been the challenge. According to an article published by the Wall Street Journal in 2011, CFDA president Diane Von Furstenberg was “horrified and terribly embarrassed” when an underage model graced the runway for DVF at New York Fashion Week. At the same time, Marc Jacobs openly hired underage models to appear on the runway. These designers are not the only ones who have overlooked set guidelines; Vogue China and Japan have both admitted to using underage models in issues, going against the revolutionary initiative and, in turn, watering it down.

But it seems as though the problem hides somewhere deeper. An initiative, by definition, is a leading action (and by no means a rule or law). The CFDA clearly states “The CFDA Health Initiative is about awareness and education, not policing.” And Vogue’s revolutionary, but rather loosely constructed pledge, vows, “We will not knowingly work with models under the age of 16 or who appear to have an eating disorder.”

While these are steps forward, nothing is concrete and seems almost half-hearted when scrutinized. There are no rules, only guidelines. The industry overall still stands by beautiful being skinny, because skinny is desirable and desirability drives sales. Models are expected to fit into the standard sample size 2, a feat that is dramatically easier for a teen than a 25-year-old woman. Despite this notion, modeling agency entrepreneur Ben Barry begs to differ, arguing that products sell based on shared characteristics between models and particular target markets.

Awareness has been a drastic first step to change in the fashion industry. With groups like The Model Alliance, models can feel empowered in an industry where competition is so steep and health is often put on the back burner. Yes, the industry standards must change, but until current laws are abided by all, including models, these current industry standards will remain the same. ~K-SS

A screenshot from 'Girl Model' 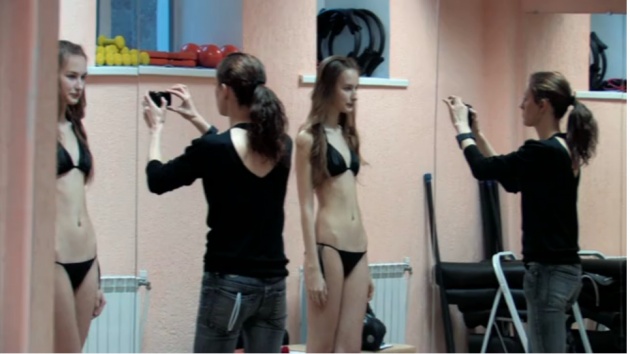