Forex Trading – A Complete Guidance of Basics for Beginner’s

Foreign Exchange Trading which is shortly know as Forex trading refers to the exchange of two or more foreign currencies in the recognized market. The Forex market is the largest liquid market in the world as per the average traded value of currencies. The daily average Value of traded currencies in the Forex market, including all currencies of the world, is $1.9 trillion. Forex trading is one of the well-liked investment of investors because investors can start investing from little amount of $10 and most vital get quick profits with positive fluctuations.

The major two reasons of the Forex trading are (a) Business Transactions (b) Speculation. The first reason of foreign trading is just to clear the transaction(s) in foreign currency. This type of trading is mostly done by companies around the world which traded goods and services in foreign countries. And the second most reason of the Forex trading is just to earn the profit with the fluctuation in the currencies. As the word speculation is used means with the expectation of higher profit the chances of great losses are also. That’s Forex trading is highly risky and need very vigilant decisions. In this type of Forex trading both institution traders and individual traders participated to earn profits.

Foreign Trading basically involves the exchange of one currency for another. This means in FX traders simultaneously buy one currency and sell another currency. Suppose trader willing to buy USD for EUR, then here he will sell EUR and buy USD. These currencies are called currency pairs. Each currency is represented in three letters the first two letters denote to country and third one denotes to local currency. 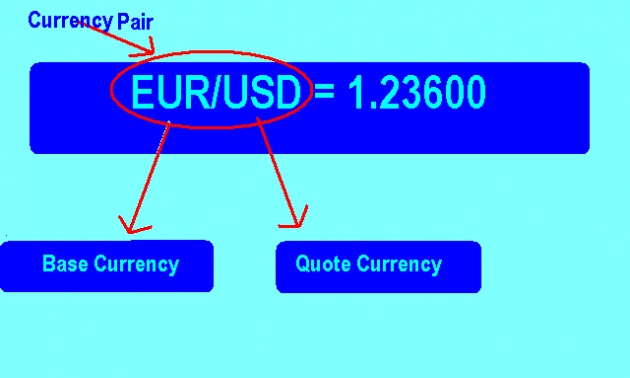 In the Forex trading mechanism the every currency has specified exchange rate for another currency. And most important is Forex pairs are read in the reverse direction of mathematical ratios. Let’s understand with example:

As we well know that the rate of one currency fluctuates relative to another currency that’s traders in order to earn profit buy and sell currencies as per the market conditions. Let’s understand with example how FX trader makes profit in Forex Trading: 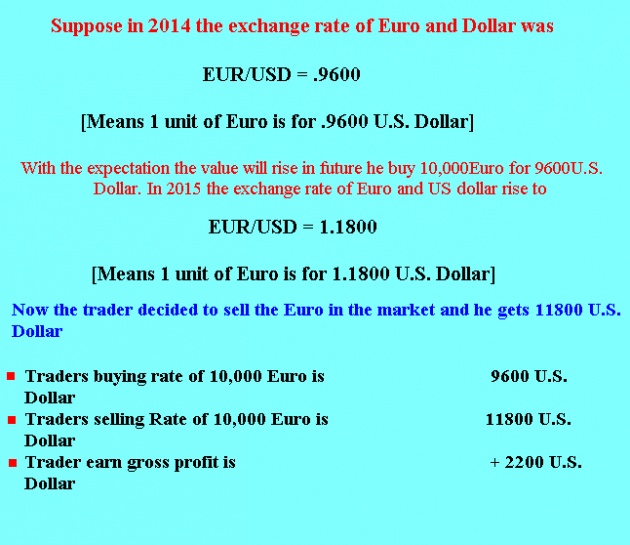 Forex Trading market is worldwide market which opens 24 hours a day and 5 days a week. And most important is the transactions of Forex exchange are not centralized rather trade is done worldwide over the counter through telecommunications or internet. Anyone can invest in Forex trading through the services of commissioned based licensed broker. In order to enter in Forex trading the traders need to first decide whether they wish to buy or sell the currencies.

The Forex Traders must know about Forex Trading basic terminology 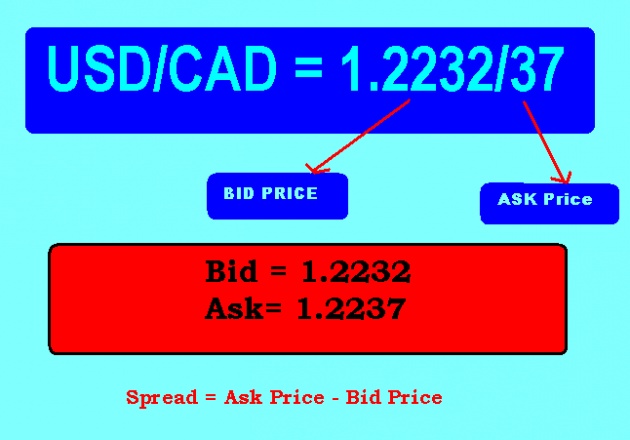 Suppose you wish to trade U.S Dollar (USD) for Canadian dollar (CAD).  In Forex market all Forex Quotes are quoted with two prices that are Bid and Ask price. View the following quote:

Here the amount shown on the left side of the slash is the Bid price which denotes to the price at which the market ready to buy the base currency means you will receive 1.2232 CAD in short order. On the other hand price on the right side of the slash is the Ask price at which market is willing to sell the base currency means here you have to pay 1.2237 CAD in long trade.

In Forex exchange the positions of the traders are classified into two categories (1) Long trades (2) Short trades.  Here if you are going to buy currency pair like USD/CAD (with expectation to make profit with the rise in exchange rates) you are called in long trades. But if you are going to sell currency pair (whereby profits are expected with fall in exchange rate) that is called short trades. Let’s explain with example:

Suppose the existing exchange rate of the currency pair U.S dollar and Canadian dollar is

The difference between the Ask and Bid price is called Spread in the Forex market. As the market conditions and liquidity change the spread is also reduce and extend as per changes. The ask price is always higher than Bid price.  Let suppose

In Forex market in order to measure the profit or loss the concept of PIP (Price Interest Point) and BP (Base Point) is used. The word PIP is an abbreviation of Percentage in Points. A pip is the smallest price changes that specified exchange rate of a currency pair can make. The profit or loss in the Forex trading can be evaluated on the basis that how many Pips you get or loss. Mostly currency pairs are displayed in four decimal places,except the Japanese yen, so the smallest change for mostly rates is .0001 which is equal to a 1/100 of 1%. 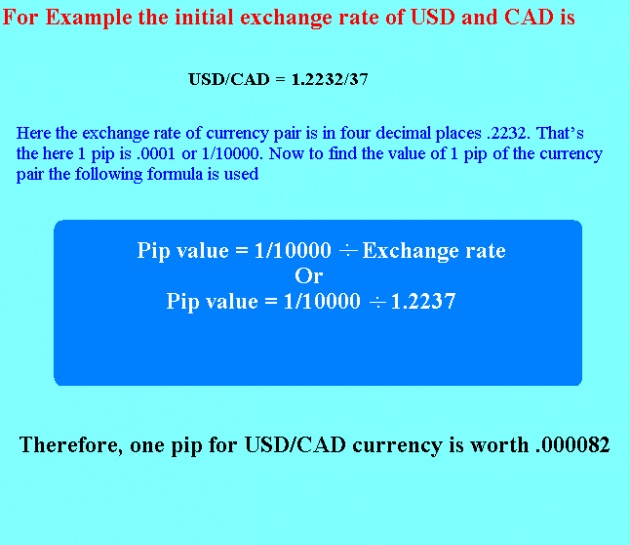 Now suppose, after few hours you discover change in the exchange rate of the given currency pair that is:

Now to calculate the actual value of the profit in dollars earn, multiply the number of pips gain with the value of pips.

Here USD is base currency and CAD is Quoted Currency. Means with 1 unit of CAD you can buy 1.2345 Canadian dollar

Here Canadian dollar is the base currency and U.S dollar is quoted currency. Means with one unit of Canadian Dollar you can buy 1.1983 USD Dollar. 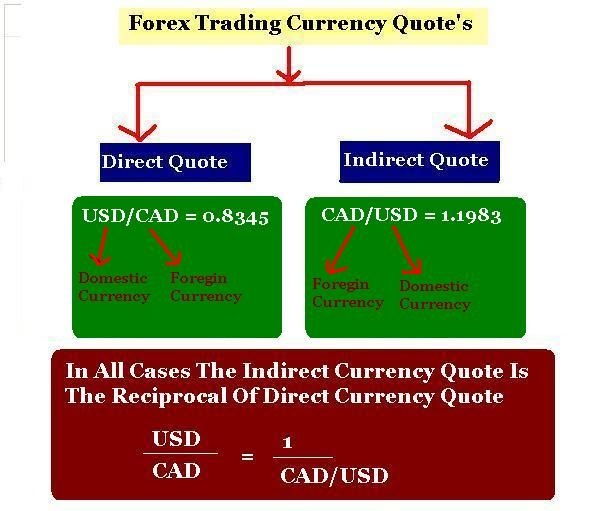 The concept of leverage, in Forex trading, means using the borrowed funds to increase the chances of profit with fluctuation in currency rates. In other words Leverage is a type of loan provides by broker to investors. Generally, the ratio of leverage is based on the value of base currency (which are domestic currency) and the value of lot or position of investor. Let suppose, your broker permits the maximum leverage of 50:1, which means for every 1 dollar you can trade $50. Obviously, if you have lot of $100,000 to invest in Forex trading and your broker allows you for 50:1 leverage means you can now invest in market up to $500,000 for getting higher profits. In easy words you can say, Leverage is the capability of investors using borrowed funds over the Principal amount which they are able to invest.

The term margin denotes to the minimum required balance of amount which must be in your trading account to open a trade. Technically, when Forex traders open a lot or position in market they need to set aside a percentage of the total value of the contract in good faith which is known as margin or marginal requirements. Margin sometimes also referred as performance bond as it is that amount of equity which makes sure you can cover your losses. The following formula is used to calculate the margin requirements:

Let’s Explain It with Example:

Suppose you wish to invest in currency pair USD/CAD and current quoted value is USD/CAD = 1.2232/37 and wish to buy 100,000 Canadian dollars and your broker ask for 2% margin to open the trade position. In that case the margin is calculated: 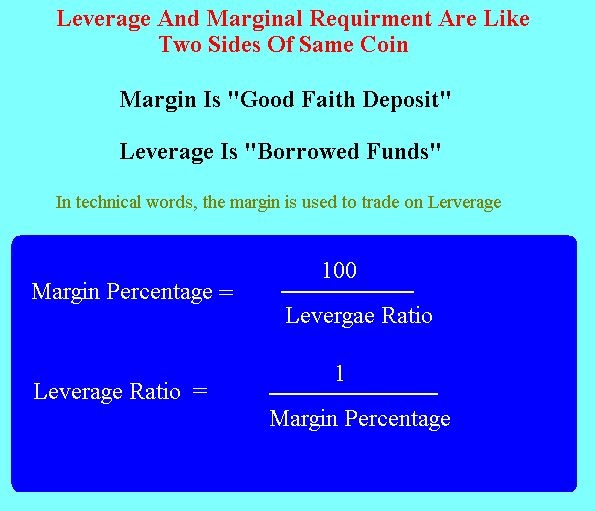 A Margin call is a type of a warning message which a broker send to trader’s while their account is running short of sufficient funds or short of  margin requirements to support their current open position in the market. The following equation is used to calculate margin available for open position;

Equity (Which is value of your account) is calculated using the following formula:

That’s if usable margin is equal to zero (which means equity = used margin) and If usable Margin is Negative (Which means equity is less then used margin) then you can get a alert message which is know as marginal call. In many cases while you have not sufficient funds in your account the brokers can close your open trades automatically.

Extending the date of settlement of open or holding position in the Forex market is known as rollovers. What is settlement in FX? Settlement is the day at which the trader has to deliver currency to another entity of contract and it’s the 2 days after the transaction held. In Forex market the trader trade contracts on currencies which are to be delivered in 2 business days. The traders who want to extend their trade position without settlement or without taking currency delivery must close their position before 5 p.m. EST on settlement day. Through Rolling over traders close the open position at daily closing rate and reopen the trade at new price on next day which will extend settlement period by one day. This strategy in Forex trading is known as Rollovers. Mostly, Rollovers is created through swap contract and most important this Rollover subject to interest rate which is known as Rollover interest. The Rollover interest is paid or gained by the trader for holding currency spot position overnight. 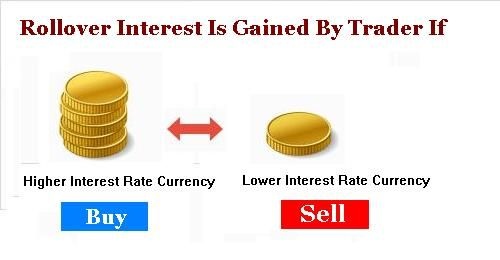 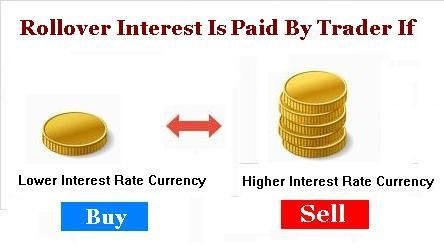 If you are new to the Forex Trading then first question in your mind will be – How much Forex Trading Is Safe to Invest? Forex Trading, which is very volatile in nature, mostly trades on short term basis and offers higher potentials of gain or risk. In this Industry, where trading is done worldwide on the basis of over the counter concept, you can make millions in short span of time only if you carefully make analysis and study of currency trends. But downside is you can lose even millions if you work carelessly. 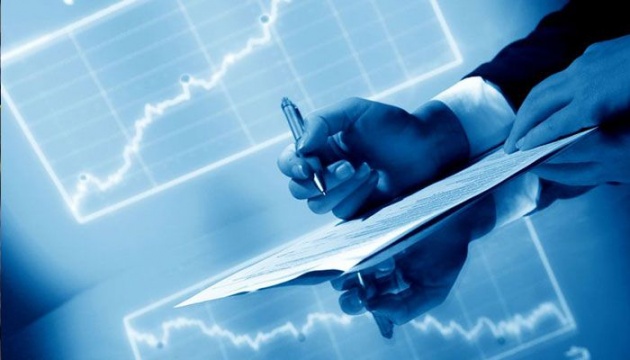 To make sure you are safe on Forex trading the first step is registered with Legal Forex Broker who deals with Forex transactions or trading. This will help to make legal and secure trades in the Forex Industry. After registration you need to open the marginal account to start trading. Of course Forex trading is vibrant and demanding investment pitch and there is no 100% guaranteed strategy to earn profits in Forex but still you can adopt some techniques to tackle the trading risks

Various strategies and methods are used to counter the risk of currency exchange rate fluctuations which is known as Hedging. No doubt, in Forex Trading risk is higher but it can be managed if well strategies are planned.