I suppose that it is slightly ironic for a videogame featuring a narrative that is all about technological superiority to have suffered from so many technical issues. Thankfully, I say suffered rather than suffering, because magically, the bugs seem to have been ironed out. For the record, my initial review of Watch Dogs (PC) was a 1000-word complaint in frustration on my reasonably capable PC.

During the first week or so, attempting to launch the game through its mandatory Ubisoft platform, UPlay, meant waiting hours for the connection and authentication issues to sort themselves out. When I finally had the game started after having passed the time by reading through War and Peace twice (that’s a joke, I can’t even read that book once), Karachi’s electricity company, K-Electric, decided to make my life easier by cutting of the neighbourhood’s power. At that point I couldn’t decide which company I disliked more, Ubisoft or K-Electric. Initially it was the former, considering that I had paid 50 dollars for a game I could not play, but at least Ubisoft  sorted themselves out.

But I digress, this is a review of Watch Dogs, not K-Electric. 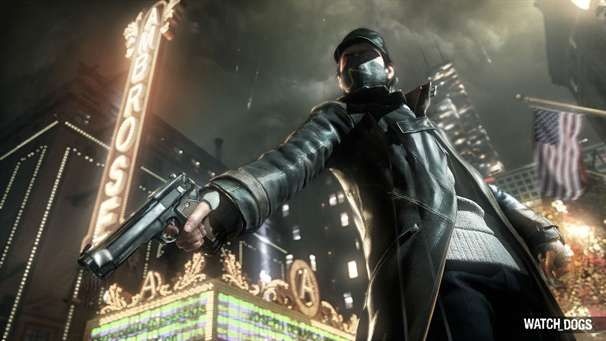 When Watch Dogs finally began to run on first attempt, other uglier issues quickly rose to the surface. Although the game looked merely OK at medium settings, it faced such inexplicable stuttering issues that a rickshaw trip across Swat Valley seemed like a smoother ride by comparison. In a nutshell, playing Watch Dogs was like dating someone who was at 6, yet gave you attitude as if they were at 10.

Recently, I had the ole’ dog running again, and to my surprise, it ran significantly better, having apparently taken medication for its bipolar disorder. As readers may be aware, Watch Dogs is considered to be the most hyped next gen game of 2014. On surface, it seems incredibly exciting and quite revolutionary, but under the hoods, as some of us predicted, it is simply a mash-up of genres covered with gimmicks designed to make it seem unique. Is the game fun? Hell yes, it is. But ultimately, Watch Dogs feel like Arkham City and Grand Theft Auto got together and had a baby which can’t break out of its parents’ shadow.

Like most open world Grand Theft Auto clones, Watch Dogs follows the standard progress system where the story is developed through the main missions, while the side missions act as a distraction. You play a hacker named Aiden Pearce, who is capable of hacking into numerous electronic devices in the city using his smartphone. 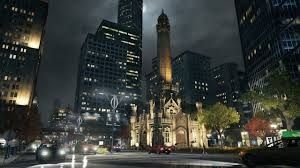 As the master hacking protagonist, you can stop vehicles, steal funds, initiate blackouts (the folks at K-electric should like this game!), change traffic signals to cause accidents, create diversions and more. Interestingly enough, these abilities aren’t complex to execute, resulting in the actual act of hacking feel underwhelming. Often, it just takes a push of a button to feel like a ‘modern day magician’. But although the hacking is unsatisfactory, the payoff is an absolute joy. By simply overloading circuits you can burst a stream pipe or have a grenade in a guard’s pocket explode, leading you to feel like a trickster in the big city. When Aiden isn’t killing his foes through hacking, he is executing them with a variety of smart guns, which often feel too accurate. Yes, I hardly broke a sweat in Watch Dogs as I gleefully killed countless enemies, relying on a simple cover system for protection.

Why does Aiden continue to kill long after any ordinary serial killer would have found a new hobby? For revenge, of course. Eventually, Aiden does begin to wonder if seeking vengeance is worth murdering so many, but really, that’s like ordering a diet coke after having swallowed fifty cheeseburgers. Because Watch Dogs is a mindlessly fun action game at heart with pointed lewd humour; its attempts at being intellectual feel disingenuous. Strangely, many of the citizens you eavesdrop upon seem to suffer from some sort of sexual deviation or another, and this weird humour in the game feels at odds with Watch Dog’s half-hearted attempts at serious social commentary.

Sometimes the game does ponder serious questions, such as the balance between freedom and security, but these themes were clearly woven in the game as an afterthought. The only moments where Watch Dogs shows us a true moral compass is when it shares personal information about Aiden’s victims: one was a father; another, perhaps suffering from depression. Likewise, the storytelling in Watch Dogs is an absolute snore fest, lacking depth or characterisation.

It wasn’t long into Watch Dogs that I came to a realization: This isn’t a smart game; it is a dumb game with cheap thrills; essentially a Grand Theft Auto clone that has gone through a hacking makeover. Ultimately, the features which were sold to us as being extraordinary, turned out to be quite flat, yet the actual game play is surprisingly solid, and shall be quite entertaining for your inner psychopath. 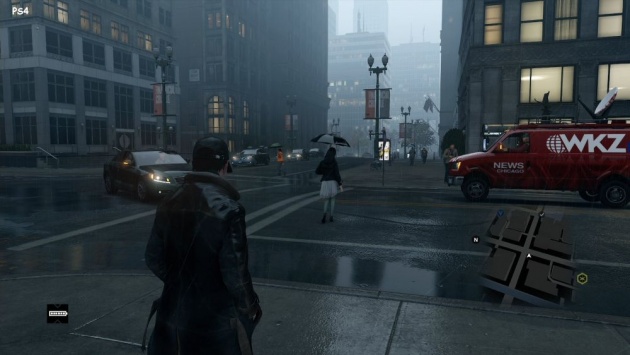 Graphically, the game is fairly impressive on the PC – once you are able to play the titles as it was meant to be played – sporting detailed textures and lovely animations. Particularly impressive is the city of Chicago, which is stunning both in terms of size and detail. There are many things to do in the city when you aren’t concentrating on the main quest, though many of these quests eventually become repetitive.

The game also employs a Dark Souls style multiplayer component, where other players can ‘invade’ your world. Sadly, this aspect of the game feels like another half – hearted implementation, where dealing with the invader isn’t rewarding, and simply distracts you from game. Essentially, that’s one of the game’s most important challenges: sticking to the fun stuff.