Geology and its Branches part 1

GEOLOGY
Geology is the “Scientific Study of the Earth” – in some books it is synonymous to Earth Sciences and Geo- Sciences and in some books it is classified under Earth Sciences / Geo-Sciences.
Geology  “Geos” means “Earth” + “Logos” means “Study, Reasoning, Science”, etc.
Geology deals with the study of origin, age, structure, materials’ constitution and properties of the Earth.
Geology also deals with the evolution, modification and extinction of the surface and sub-surface physical features e.g. mountains, plateaus, plains, valleys, basins, caves, coastal and marine formations.
Evolution: A gradual geological (or biological) process in which something gradually changes into different (usually more complex or better) form. 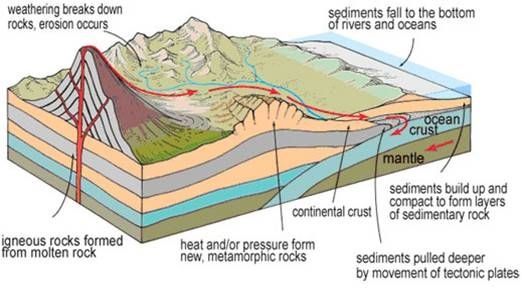 Extinction: A gradual reduction, loss, termination or disappearance of some thing or property; the term used in geology and biology.
Geology includes the study of various physical processes (e.g. evolution, tectonic processes, etc), dynamic processes (e.g. wind, tectonic, volcanic, glacial, etc) and physicochemical processes (relating to or carrying both physical as well as chemical processes at the same time, as involved in metamorphism, magmatic phenomenon, earthquake, etc) taking place on and inside the earth. Geology is a fundamental or basic science like Physics, Chemistry, Mathematics and Biology; Geology can not be studied under the said subjects.

Tectonics: It is a subject of geology which deals with the physical processes, usually mechanical / deformational processes acting upon the earth’s structural features, usually going inside the earth.
Tectonic: Concerned with Tectonics.
Glacier: A huge mass of snow usually the slowly moving mass that moves over a land mass.
Glaciation: Condition of formation of a glacier or of land getting covered with a glacierMetamorphism: A geological process in which a pre-existing rock sinks down and buries deep inside the earth, subjects to the effects of chemical substances/processes (or very hot water containing the chemical substances) and very high temperature and pressure and get transformed into completely different type of rock with the entire different physical properties and chemical composition. Metamorphic, Metamorphosed.
Epigenesis: Change in mineral constituents or composition and/or physical properties of a rock due to the external conditions/effects.
. Physical Geology: It deals with the study of various surface and sub-surface physical processes caused by the geological or meteorological agents whether external or internal (external agents: wind, rain, ground water, snow, etc), (internal agents: tectonic processes, volcanism, earthquakes, metamorphism, etc) which play an important role in producing the earth features whether surface or sub-surface (surface features: mountains, plateaus, valleys, surface basins, etc), (sub-surface features are also known as Internal Structural Features or Geological Structural Features: folds, faults, strata, bedding, etc) and other changes. Disposition (arrangement, positioning, distribution, etc) of Rock-bodies, Water bodies, Earthquakes/Volcanos and Glaciers and their formations are also the study of Physical Geology. Geomorphology: In the beginning it was classified under Physical Geology. Geomorphology deals with the study of features and formations of the land surface. The formation and evolution of the landforms with the lapse of time, are the advanced subjects of geomorphology.
. Mineralogy: It deals with the study of formation, occurrence, aggregation (combination, accumulation, collection, etc), properties and uses of the minerals. Minerals are the building units of earth crust. Mineralogy is further sub-divided into three important subjects:
(i) Crystallography: Study of formation, properties and structures of the crystals and crystal systems exhibited in the minerals.
(ii) Optical Mineralogy: Study of the minerals on the basis of their Optical Properties e.g …. and
Optical Properties: Various phenomena/behaviours of light when it strikes at or passes through an object / medium. Examples of Optical Properties are:
Reflection, Refraction and Refractive Index, Birefringence, Diffraction, Interference, Dispersion, Polarisation, Pleochroism, etc.
Reflection: Returning of a wave from a surface it strikes at, in the same medium.
Refraction: Slight deflection in the path and change in the speed of a wave while passing obliquely from one transparent medium into the second.
Refractive Index: It is the ratio of speed of light in vacuum with respect to that in a medium under consideration.
Birefringence: It is Double Refraction.
Diffraction: Slight bending of the light around the edge of an object, usually towards the darkness or zone of less brightness.
Interference: A process in which two or more coherent waves combine to form a resultant wave changing the amplitude of the individual waves.
Dispersion: Breaking up of a complex wave into its component parts according to a certain characteristic, usually the frequency or wavelength; mostly the breaking up of the visible light into the seven colours.
Polarisation: A phenomenon in which the waves of light or other radiations are restricted to travel in certain direction only, especially along the plane of vibration after they strike an object usually the transparent or translucent object (in case of light), owing to the orientation of the crystals of that object.
Pleochroism: A phenomenon in mineral grains in which the grains appear to be of different colours when observed at different angles due to the polarisation effect. It is chiefly studied in mineralogy.
) Descriptive Mineralogy: It is the mineralogical study based on the Mineral Classification: based on the radical constituent (e.g. sulfides, oxides, hydroxide, carbonates, nitrates, sulfates, chromates, halides, etc) or Mineral Categorization: based on the mineralogical constituent (e.g. olivine, pyroxene, amphibole, hornblende, feldspar, orthoclase, etc) of the minerals together with the properties and uses of the minerals.
Other (less important) branches of Mineralogy are: Physical Mineralogy, Chemical Mineralogy and Biological MineralogyPetrology: It deals with the study of origin, composition, distribution and structure of the rocks. Petrology is further sub-divided into: (i) Lithology (macroscopic details of rocks), (ii) Petrography (microscopic details of rocks i.e. of rock-grains), (iii) Igneous Petrology (iv) Sedimentary Petrology and (v) Metamorphic Petrology.
. Structural Geology: Structural Geology is the study of the three-dimensional distribution of rock-units in the rock body or stratum with respect to their deformational histories. It studies the information about the history of deformation (strain) in the rocks and stress-field that resulted in the strain and geometries of the rock units.
Economic Geology: It deals with the study of occurrence and principles involved in the formation and accumulation of the Economic Minerals: useful minerals, rocks, various mineralogical resources e.g. coal, mineral oil (i.e. crude oil/petroleum) and gas, building stones, economic metals and non-metals, salt deposits, radio-active minerals and industrial minerals e.g. abrasives, electrical minerals, insulating minerals, refractories, etc. and their properties which help in the exploration and exploitation of these economic minerals.
Historical Geology: It deals with the study of past history and ages of various stages of earth. It mostly studies about the Fossils (remains of the ancient life).

Historical Geology is further sub-divided into:
(i) Paleo-geography (also known as Historical Geography): It is the study of the nature and features of the earth in the past geological time.
(ii) Paleontology: It is the study of various forms of life existing in the past geological time and
(iii) Stratigraphy: It is the study of deposition, formation, distribution and ages of various rocks especially the Sedimentary Rocks (types of the rock which are formed by the deposition and solidification of the materials in form of layers at and near the earth’s surface and in the water).