Geology and Our Earth

Hydrosphere
Unique property of the water by which it is distributed around the globe - phenomena of evaporation and condensation
Water evaporates from the land surface and oceans, rises and
Suspends in vapour form and appears as clouds
Condenses in liquid form and rains down in form of rain
A part of the suspended vapours rises up to sufficient height
Loses considerable energy and temperature
Condenses in form of snow and when it can not be supported by the atmosphere, it snows down on the earth.
THE EARTH
Our earth comprises - three well defined layers, zones or shells:
The Crust, The Mantle and The Core (the most usable term in this sense is Shell)
Prof. Mohorovicic – a Seismologist of Yugoslavia was the first person to discover these shells and co-related facts in 1904 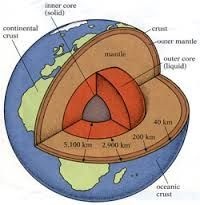 (i) The Crust:
Uppermost shell of the earth
Varies from 75 km to 5 km in its thickness
Its top-most layer is known as Regolith
Regolith comprises the loose, heterogeneous material covering the solid underlying bed of the rocks
Solid underlying bed of the rocks - known as Bedrock
Regolith is composed of:
soil, sand, loose rock fragments, volcanic ash, glacial drift
Drift: a material carried along by the currents of air, water, glacier, etc
The crust is thickest – 75 km under Mount Everest – the highest peak of The Himalayas (situated in the north of Nepal) and has the same thickness under Chimborazo – the highest peak of The Andes (situated in the north-west of South America)
The crust is thinnest – 5 km under Marina Basin (situated in Pacific Ocean in the far north-east of Australia.

(ii) The Mantle: Second concentric shell of the earth
It lies beneath the crust everywhere in the earth
It is separated from the deep crust by Mohorovicic Discontinuity known as M – Discont
Whereas the mantle and the core are separated from each other by Mantle-Core Discontinuity known as MC – Discont.
These Two types of Discontinuities (Mohorovicic Discontinuity and are Mantle-Core Discontinuity) are defined by the abrupt increase in the velocity of the Seismic Waves usually from 5.5 to 7.5 km/sec
Mantle starts from M – Discont and goes down to MC – Discont.
2,900 km thick
Ultrabasic - highly basic: means an igneous rock which contains large amount of magnesium and iron but very small amount of silica
Basic means an igneous rock which is very poor in silica
Mantle has high density which increases with the depth and very viscous in natureAlmost all the important plutonic geological processes e.g. volcanism, seismic activity, orogeny, etc originate in the mantle
Mantle is further sub-divided into: Upper, Middle and Lower Mantle.

Seismic Waves comprises three types of major waves:
P-Waves Primary Waves or Elastic Waves
These are longitudinal in nature
These waves move onward in the horizontal plane in alternate compression and tension manner

P-Waves have the highest travelling velocity - therefore they are known as Fast Speed Seismic Waves
P-Waves reach earliest to the surface than the other two types of waves
P-Waves can travel well through the semi-solids and liquids - therefore they can penetrate the Core of the earth with very little deflection and less loss in penetrating energy
Rayleigh Waves – named after a British physicist Lord Rayleigh – a Nobel Prize holder and
Love Waves – named after a British mathematician Edward Hough Love
Both these waves are the type of Vertically Polarised and Horizontally Polarised S-Waves respectively (both waves are S-Waves)
AGE OF THE EARTH
Approximate age of the earth as determined from:
Radioactive Dating Method – usually Radio-Carbon Method is used for it
Approximate age of the earth is: 4.5 to 4.6 billion years (this figure is believed to have a little error in its estimation)

Geological History of the Earth:
Began about 4.5 billion years ago when the planets of the Solar System were formed out of the solar nebula
The Earth was Initially in molten state
The outer layer of the Earth cooled and formed a solid crust when water began accumulating in the atmosphere.
The Moon formed soon afterwards
Outgassing and volcanic activity produced the atmosphere
Water came from the comets

the present pattern of Ice Age began about 40 Ma
Then it intensified during the Pleistocene Epoch about 3  Ma
Epoch: An element of Time Scale
The polar regions have since undergone repeated cycles of glaciation and thawing, repeating after every.