Getting Paid with Forex

How I Made My First Check With Forex 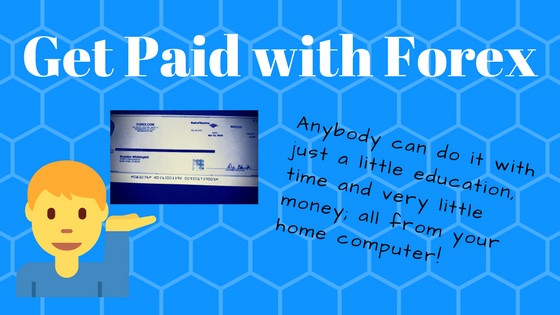 All my adult life I have had one goal, to work for myself on my terms and nobody else's. That said I've tried many things to make money from home and a few have helped and some have been down-right terrible. That all changed when I saw an ad on Facebook telling me I could make $1000 a month using OPM (Other Peoples Money); and I jumped at the opportunity.

It turned out to be a company that educated and trained people in the foreign currency market, or forex. Now as Forex is a bit complicated to explain by typing it out; here's a quick little video to explain ( it wouldn't let me post it on BitLander, not sure why).

So, we (as traders) make money trying to capture PIPs which again is Price Interest Point, which is literally a thousandth of a point, and each PIP can be worth as little as .05-.10 cents. Doesn't sound like much right? but it adds up, and it can be much higher as well. You can get up to $10 per PIP if you are trading in Standard Lots. However, even if you are trading in micro lots, you can start there and build your account to the next level and build it up, and so on. Here's a little diagram to work out how lot sizes work out. 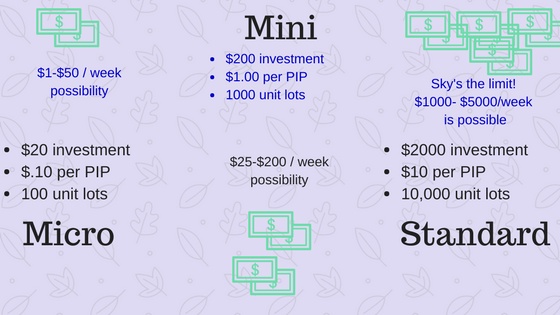 I started out with $200 in a Forex.com account, after trading in a demo account for a day learning how to interprate the data as it was being shown and what certain patterns meant; I began placing trades. Talk about nervous, my hands were sweating and shaky as I cliked the mouse and bought into my first pair. As I sat and watched the line on the chart tick away goin up and then down, I kept wondering if I was making the biggest mistake of my life, the chart was turning down and I was starting to loose money instead of make it.

Thousands of voices and comments rushed through my head, as I heard my wife saying it was too risky, my father saying I would loose all my money, and news reels about a volitile market flashed; suddenly the trend line began to even out. As my hands started to calm and I started to relax, for just a momment it flashed towards the down trend again, but at the last minute, it happened.

The trend reversed, just as I thought it would; and even better, it looked like it was skyrocketing streight up. I watched with anticipation to see how high it would go, but it just wasn't stopping. Ten Pips, fifteen, twenty, it was just going and going. This was my first breakout when the chart shoots in a particular direction, and mine was going high in my favor.

That first deal made me almost $35 in 15min. That was it I was hooked. Now I'm on my mission to get to $100,000 by Janurary 1st of 2020, and I know I'll get there. I will be challenging other to do the same and giving follow-ups if you want to check ing here or on Facebook. I've been at it ever since then (almost 2 whole weeks LOL) and I've had other wins and some losses; but I know how to play the game, and boy it's a hell of a game to be in! 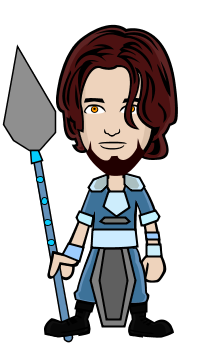