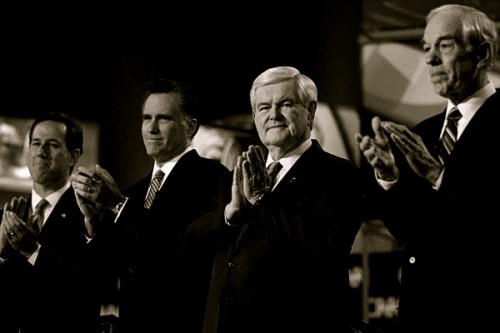 Florida will be even more money barrage upon primary election. Reloaded by ever more Super Pac money ammo, Gingrich overtook Romney’s spending advantage. Rick Perry and John Huntsman had to drop out and Rick Santorum and Mitt Romney are bleeding into Florida – Read: “There Will be (Republican) Blood in South Carolina”
Rick Santorum is in danger of falling off the election charts. He knows how to fire offensive language to draw fringe votes, but among even the silent hypocrisy, they fear that he actually means everything that he says from contraceptives to starting wars in God’s name. In end, he will swing for Gingrich. That will probably leave Ron Paul as kingmaker. Paul has limited but steady resources from a core libertarian base. He will commit minimal funds to Florida, as it is a “winner take all state.” However, he will be strong in subsequent states, especially where libertarian values are more balanced to the Christian Right. (See California and much of West and North which also tend to place greater emphasis on fiscal conservatism as Paul). Ron Paul’s lack of big Super PACS to back him will keep him from gaining the nomination. It does not though limit him from delivering his message, and at least to some degree influencing the platform and future. And, Ron Paul is actually more throwback to the old Libertarian Republican Party than one now invaded by cast-offs from more diverse and embracing Democratic Party in post Jim Crow era. This will bring the election down to two a fight between two ironclads, submergibles who will go infinitum into the primary battle as did the Monitor and Merrimack. Each needs all the armament to defend themselves, as both are highly vulnerable to volleys of negative advertisements. In the end, while Gingrich is more maneuverable and Romney sits lower to the waterline, the one with the most money, ammo will prevail. Don't fret, not matter how much is, they will figure out how to spend it. Read: “Getting Vote Out with Limo & Complimentary Drink” -  By Ambassador Muhamed Sacirbey Facebook Become a Fan at “Diplomatically Incorrect” Twitter – Follow at DiplomaticallyX FOLLOW mo @MuhamedSacirbey