Glycogenesis is the formation of glycogen from glucose. This process occurs primarily in the liver and in the muscles. The liver may contain up to 5 percent glycogen after a high-carbohydrate meal but may contain almost no glucagon after 12 hours of fasting.
The first step of glycogenesis involves the conversion of glucose to glucose 6-phosphate (abbreviated as glucose 6-P), a phosphate ester of glucose. ATP from the liver cells serves as a source of the phosphate group. After the loss of a phosphate group, ADP is left. They enzyme glucokinase is necessary to catalyze this reaction. Insulin is involved in the phosphorylation of glucose by glucokinase.
Glucose 6-phosphate is then rearranged so that the phosphate group moves from the number 6 position to the number 1 position, producing glucose 1-phosphate. The enzyme required for this reaction is phosphoglucomutase.
Glucose 1-phosphate then reacts with uridine triphosphate (UTP) to form uridine diphosphate glucose (UDPG). (Uridine triphosphate is similar to adenosine triphosphate except that uracil takes place of adenine. ) The enzyme is UDPG pyrophosphorylase.Then the glucose molecule in UDPG (activated glucose molecules) is joined together to form glycogen. The enzymes necessary here are glycogen synthetase and a branching enzyme. The former enzyme is regulated by both insulin and cyclic adenosine monophosphate (cAMP). 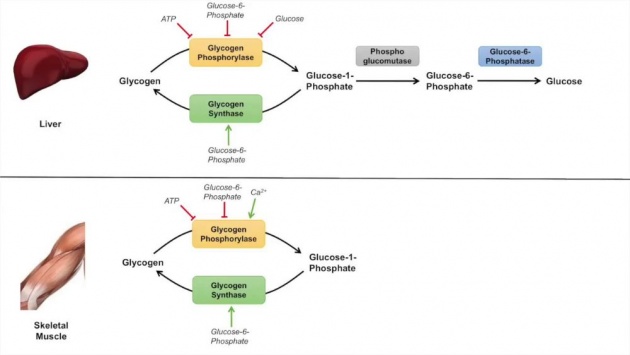 In glycogenolysis, we might expect the reverse of all reactions of glycogenesis, but it should be noted that the first reaction, the one involving glucokinase, is not a reversible action.

cAMP is involved in the conversion of glycogen into glucose 6-phosphate in both the liver and the muscle. When the body is under stress, it produces hormones that are carried by the bloodstream to the liver cells, where they activate the enzyme adenyl cyclase, which in turn causes the production of cAMP from ATP. cAMP then activates a protein kinase, which in turn activates a phosphorylase b kinase. This phosphorylase b kinase then activates phosphorylase a, which triggers the conversion of glycogen into glucose.

The same type of reaction is involved in the conversion of muscle glycogen into glucose 6-phosphate. cAMP also deactivates the enzyme glycogen synthetase, thereby stopping glycogenesis. 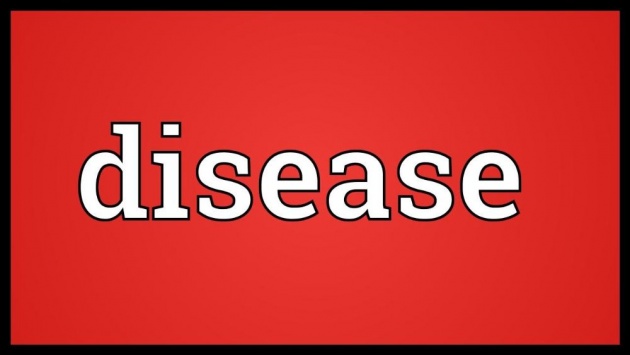 Glycogen is normally stored in the liver and muscles. In several inherited diseases, glycogen cannot be reconverted to glucose, so it begins to accumulate.
In von Gierke's disease, the enzyme glucose-6 phosphatase is lacking in the liver, and glycogen accumulates in the organ. As this occurs, hypoglycemia ketosis and hyperlipedemia also occur, and the liver enlarges because of the increase in stored glycogen.
In Pompe's disease glycogen accumulates in the lysosomes because of a lack of a lysosomal enzyme that acts in the breakdown of glycogen.

Courtesy of the video: The Study Spot via Youtube
Other glycogen storage diseases include Andersen's disease (in which death occurs in the first year of life because of liver and cardiac failure), McArdle's syndrome (in which individual has greatly diminished tolerance to exercise because of a lack of a muscle enzyme involved glycogenolysis), and Tarui's disease (which is caused by phosphorylase deficiency in the liver).

We asked Von Gierke's disease' victims in our place and according to Dr. John Ly, endocrinoligist that further specializes internal medicine , this is a rare case. Below is the report.

An 11-years-old is admitted to the hospital with a history of frequent weakness and sweating, which are relieved by eating. Her abdomen is grossly distended and she is pale. A developmental history shows that she was able to sit unsupported at one year of age and did not walk until two years of age. Currently, her school performance is poor.

A liver biopsy is performed; it reveals the hepatic cells to be bulging and dilated. The enlarged liver is firm but not cirrhotic and it is buff colored. The portal areas are shrunken and compressed. Staining for carbohydrates shows a positive result for a large number of carbohydrates in the parenchymal cells, which were removed by digestion with salivary amylase.

Glycogen levels and lipid content are both elevated. However, the hepatic glycogen structure is within normal limits. 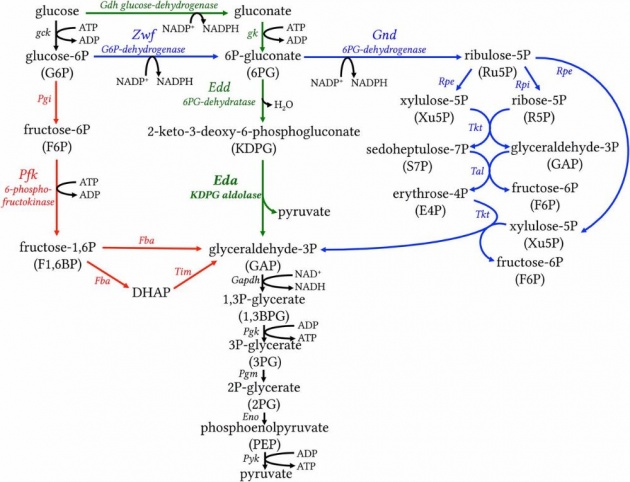 The process of muscular contraction is also called glycolysis and is an *anaerobic process- that is, each step takes place without oxygen. Glycolysis supplies the ATP needed for muscle contraction. More than 90 percent of the energy of the red blood cells is produced by glycolysis.

The ATP (Adenosine Tri-Phosphate) formed is available for muscular work. As ATP is used, it is changed to ADP (adenosine diphosphate) and must then be regenerated. This regeneration can be accomplished through the above pathway or by the use of another anaerobic sequence.
creatine phosphate + ADP---->creatine +ATP 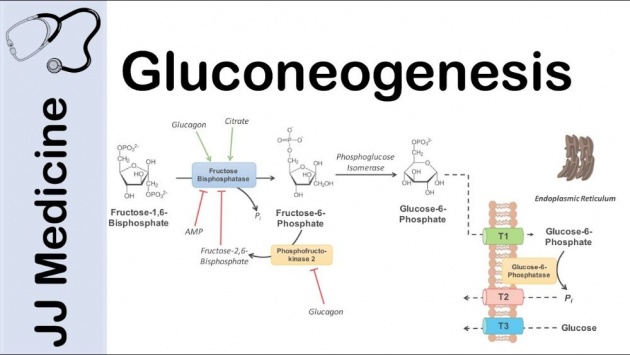 It is the formation of glucose from noncarbohydrate substances such as amino acids and glycerol. This process takes place primarily in the liver although it also occurs to a small extent in the kidneys.

A continuous supply of glucose is necessary for normal body functions. If blood glucose levels fall too low (severe hypoglycemia), brain dysfunction may occur, which can lead to coma and eventually to death. Also, glucose is the only fuel that supplies energy to the skeletal muscles under anaerobic conditions.

Glucose is the precursor of lactose in the mammary glands and also actively used by the fetus.

Thus, gluconeogenesis meets the body needs for glucose when sufficient carbohydrate is unavailable. 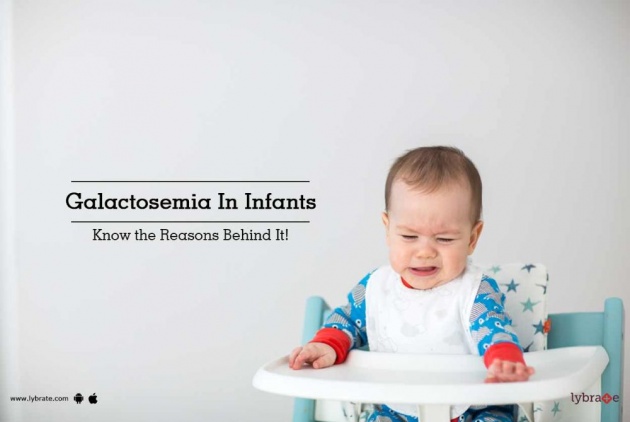 We asked the doctor who assisted the patient delivered the baby with galactosemia and here is the case:

Three days after delivery a male infant develops increasing jaundice and becomes difficult to feed. His delivery was normal, at the birth weight was 3.7 kg. There was no blood group incompatibility. However, at 6 days of age, his serum bilirubin was found to be elevated to 504 umol/L, with a resultant weight loss of 15 percent. He is readmitted to the hospital with increased muscular tones and has begun to have seizure activity. Exchange blood transfusions have been performed, but the bilirubin level remains high. Three days later it is noted that the infant's liver is enlarged and he begins vomiting.
Six days after birth, a positive result for reducing sugars in his urine is noted. On the 7 day at the same time is negative for D-glucose. Hereditary galactosemia is confirmed by the following results:
Hemoglobin 12.6 mmol/L (200 g/L)
Bilirubin (max) 550 umol/L (at day 7)
Galactose 1-P (in erythrocytes)

Formula feeding is stopped on day 9 and replaced by intravenous glucose infusion. A galactose-free diet is started and the patient's condition improves. 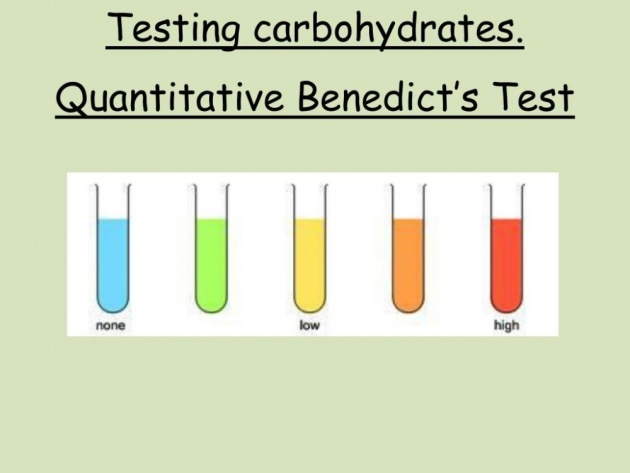 A positive Benedict's test on a urine specimen indicates that the patient may have a diabetes mellitus. However, this test is by no means conclusive proof because the presence of the sugar in the urine may due to other conditions, such as pregnancy, emotional disturbance, large intake of fruits or fruit juices, and genetic disorders (idiopathic pentosuria, fructosuria, or galactosuria). 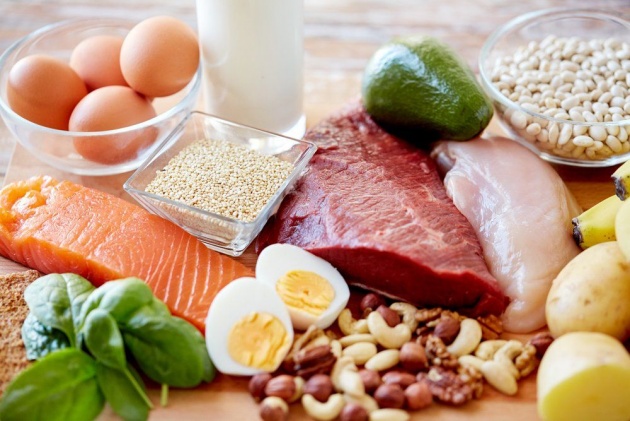 A patient with a suspected problem with glucose metabolism is given a glucose tolerance test. For 3 days prior test, the patient must be placed on a diet containing adequate protein, calories, and 150 grams of carbohydrate per day. This stimulates the production of the liver enzymes necessary for the conversion of glucose into glycogen.

Then, after 12 hours of fasting, the patient is given approximately 1 g of glucose for each kilogram of the body weight. The patient's blood sugar level is checked by withdrawing blood samples at regular intervals over several hours. The samples are chemically analyzed, and the concentration of sugar in the blood is plotted against time. 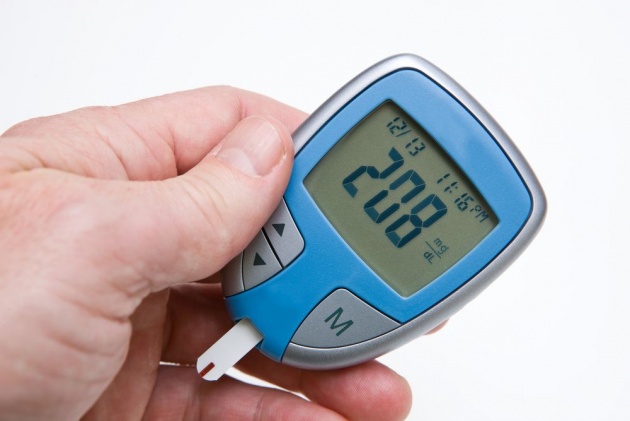 Also, in a diabetic patient, large amounts of glucose appear in the urine because of the spillover when the renal threshold is exceeded.

of this article may be reproduced without special credits

in writing from the publishers of the given references above.

Photo Credit: johny_deff via www.pixabay.com DIABETES MELLITUS Hello everyone, Im on to my second b…

A Billion Health Benefit How our body Get heals

Diminishes Inflammation Most infections today are because of irritation. Irritation harms your cell…

Health tips - 7 Reasons why sugar is bad for you

7 reasons which shows bad for you are described below: Sugar is highly addictive. It can cause insu…