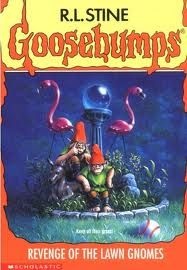 Front Tagline: Keep off their grass!
Back Tagline: Someone's Been Stalking In My Garden!

Brief Synopsis:
I thought perhaps I'd misremembered Revenge of the Lawn Gnomes. Maybe it was one of the "funny" Goosebumps books? Remarkably, I didn't and it isn't. RL Stine wrote a "scary" book about gardening. RL Stine, for future reference, here's a cheat sheet:

By now, you probably know that this was the last Goosebumps book I read as a child, and thus fittingly the last book of the original series to be covered by the blog. Before I revisited the book, I wondered if I'd be able to pinpoint the exact moment when I realized I'd outgrown the series. I got pretty far into the book before I was able to finger the breaking point, almost to the third sentence of the first page. It was probably never possible for a book called Revenge of the Lawn Gnomes to be good, but I didn't anticipate it would be this worthless. But don't take my word for it, take my word for it:

The book opens with a ping pong game. At one point protagonist Joe Burton serves the ping pong ball by kicking it instead of using the paddle, much to his older sister Mindy's chagrin. He then follows that up with a hilarious routine where he tells her there's a spider on her back. Oh man, and then, and there are tears of laughter streaming down my face as I write this, he tells her she's got something gross on her face. Isn't Joe the coolest? Don't bother answering, he's got this one:

Me? I'm not organized. I'm cool. I'm not serious like my sister. I can be pretty funny.

Must be a hidden talent. Joe reveals that he doesn't look like anyone else in the family. They're all tall and skinny and he's short and stout. Perhaps you're thinking that the twist will be Joe is actually a lawn gnome. I wish that were the twist. That is not the twist.

Shortly after arriving in the rec room, Joe's friend Moose sits on Joe's chest. I don't know either, let's move on. Moose lives next door. His father, Mr. McCall, and Joe's father have a running rivalry involving the produce they grow in their gardens. If that sounds exciting, good news, that's the entire book. The scary paperback with the dripping letters on the cover, it's about gardening.

Mr. McCall has it out for Joe's dog Buster, as the mutt has an affinity for trampling into the McCall's garden and digging it up. And sure enough, as soon as this plot point is mentioned, Buster is revealed to be digging up the McCall's garden. Mr. McCall comes out in a rampage and threatens the children and their little dog too. Boy, I haven't seen a McCall this angry since Gordon wore Casey's shirt. Joe pulls out his trusty dog whistle and Buster slinks back into the Burton's yard. I just don't understand how anyone can hate the Burtons' dog:

Joe's dad thinks it would be a fine time to visit the little old lady down the block, as she sells gardening supplies from the first floor of her three story house. The woman, Lilah, somehow stays in business, selling lots of garden-related paraphernalia, like New Jersey snowglobes and Truly Madly Deeply cassingles. Joe's dad is such a good customer that he even named a plaster deer after her, Deer-Lilah. Please note: that's not my joke. It's the book's fault!

Joe's dad loves lawn ornaments, even going so far as to dress-up the plaster deer and flamingos on his lawn for the holidays. Joe's mother however hates the lawn ornaments and finds them embarrassing. It's too bad Joe's father didn't marry John Waters. Well, I guess not everyone can appreciate the subtle social commentary of putting a beard on a plastic bird to celebrate Lincoln's Birthday. The worst part is that I didn't make that up, that's one of the holiday decorations in the book.

Joe's dad spies two darling little lawn gnomes and instantly purchases the small plaster men, eager to be a part of the Gnome Owners Association. Mindy warns that the lawn gnomes look evil in a poor attempt to generate suspense. Joe's father however ignores such frightful talk and cheerfully names the little guys Chip (because his tooth is chipped) and Hap (because either he's so happy looking or half-Japanese). Here is a list of better names for gnomes:

Walking back home with the gnomes in hand, Joe thinks he sees Hap change its expression from a cheery grin to a grim howl. Seriously, this is the book. I still can't believe it. Evil Lawn Gnomes Who Move Their Faces: The Book.

You can probably guess what happens next. Strange horrible things start to happen to Mr. McCall's lawn, and Buster the dog keeps getting blamed. Also, in between sequences of tomatoes getting squeezed and squashes getting, you guessed it, stomped, there are plenty of additional gardening scenes. However, the suspicion quickly turns from the dog to the gnomes when Mr. McCall awakes one morning to find someone has drawn smiley faces on his prized casaba melons:

Forgetting what we all learned last week with respect to what dogs can do, Joe is immediately suspected of the deed. Joe pleads his innocence and even brings in evidence of the real perpetrators: there's black paint underneath one of the gnome's hands and a melon seed between his lips. Perhaps the twist is the gnome is actually Al Jolson?

It soon becomes apparent that the rivalry between the neighboring gardening aficionados is escalating, yet the attempt to turn a gardening feud into a thrill-a-minute frightfest never quite pans out. Let me reiterate: some Goosebumps books are intentionally funny or lightweight, but this book plays it completely straight and expects the reader to be involved in a gardening war.

Joe becomes convinced that the gnomes are responsible and talks Moose into staking out the two houses to catch the lawn ornaments in the act. Moose cancels his big date with Midge and the two hide across the street on stakeout, in a scene which beautifully references everyone's favorite Emilio Estevez comedy, Men at Work. Eventually, the gnomes do come to life and start their terrorizing.

The giggling men start splashing big buckets of paint against the exterior of Joe's house, which is not part of the garden unless these gnomes have areally loose definition of what constitutes a lawn ornament. A confrontation between the gnomes and the children breaks out and at some point Mindy shows up and one of the gnomes drags her into the street by her hair. So the book is still just like any show on TLC.

The gnomes suddenly get very serious and reveal that they are Mischief Gnomes who were kidnapped from their native forest and sold into slavery. RL Stine is just about the last author who should be so cavalierly co-opting slave trade imagery. The gnomes reveal that they can't help causing trouble, it's in their nature. But, if the three kids will help rescue their friends being held at the garden supply store, Chip and Hap promise to leave forever. The kids agree and make their way to the old woman's house.

The other kidnapped ornaments are supposedly left gnome alone in Lilah's basement. Hap and Chip would have freed them alone but they weren't able to get in the basement window. Now with the help of the children, they'll be able to free their six gnome friends. The kids lower the gnomes into the dark basement and follow behind. Once inside, they see that they've been tricked. There's not six other gnomes. There's sixhundred. Wait, you mean you can't trust Mischief Gnomes?!

The hordes of gnomes come to life and start attacking the children. Some want to tickle an unwilling Mindy, apparently unaware that "gnome means gnome." Other gnomes want to use the children as trampolines or play tug of war with their bodies. This is scary? It's not even all that weird because it's so ridiculous. The children are upset about being tricked and even more upset that the narrative has strayed so far from its fundamental gardening aspects.

Luckily, Joe remembers how gnomes are scared of dogs (but not all animals I guess) and so he calls for Buster to come into the basement using his whistle. But it turns out gnomes aren't scared of dogs, they're scared of dog whistles. All of the gnomes freeze into place as soon as Joe blows the trinket. Well, I'll go ahead and say it: That was convenient.

But the Twist is:
Joe's dad, distraught from mysteriously losing his two lawn gnomes, brings home an eight foot tall plaster gorilla for the garden. Wait, a what?

The twist is supposedly that then the gorilla winks and oh it's a shock, but the real twist is what the deuce is a lawn gorilla

the Platonic Boy-Girl Relationship:
Joe and his sister Mindy, who disappears into a pack of wild living gnomes 4/5 of the way through the novel.

Questionable Parenting:
Entering the Garden of Getting Even, Joe's father takes his squashed tomato and walks over to Mr. McCall, who happens to be wearing an all-white jumpsuit. Joe's dad hurls the fruit at his neighbor, in a scene that isn't at all telegraphed or predictable.

Minority Alert:
One of those gnomes on the cover appears to be in the middle of an offensive "Me Chinese Me Make Joke" routine.

R.L. Stine Shows He Is Down With the Kids:
Gardening

Early 00s Cultural Predictions:
Joe is reminded of a zombie from a film with the unlikely title of Killer Zombie From the Planet Zero. This along with Chip's injury was twice in a book about gardening that I was reminded of Planet Terror. That's kind of a horror movie, but there isn't any gardening in that film, so in retrospect it probably doesn't seem quite as scary or exciting as Revenge of the Lawn Gnomes does now.

Look, Seriously, the Entire Book is About Gardening:
Maybe I haven't stressed this enough. I actually left out most of the gardening parts too, so just imagine how much worse it really is. There's an entire chapter about the whole family cheerfully spraying plants with insecticide.

Memorable Cliffhanger Chapter Ending:
Ch. 5/6:
Joe had no idea he and his family were about to begin "the most horrifying adventure" of their lives... as they walk into a garden store. Well, after this book, I'll admit it, the idea of any more gardening is a little frightening.

Great Prose Alert:
Anything is better than lawn gnomes who come alive and do terrible mischief.

Why People Hate or Hurt Other People (1 of 3)

Do you know why you try and/or choose to hurt other people? Are you aware why you hate your neighbor…

Maleficent : Queen Of The Moors

I am writing this blog on one of my favourite movie "MALEFICENT". It is an adventurous as well as an…