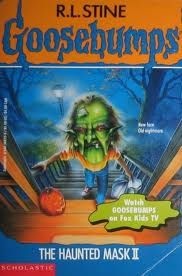 Official Book Description:
Steve Boswell will never forget Carly Beth's Halloween mask. It was so gross. So terrifying.
But this year Steve wants to have the scariest costume on the block. So he gets a mask from the same store where Carly Beth got hers. It looks like a creepy old man. With stringy hair. A wrinkled face. And spiders crawling out of the ears!
Steve's definitely got the scariest mask around. Too bad he's starting to feel so old. And so tired. And so evil...

Brief Synopsis:
Well, apparently there were a lot of unanswered questions left over from the first Haunted Mask book, so here's a sequel that poses more rather than answering any. The hero of the story is the obnoxious prankster Steve, friend of Chuck, one of the two boys who harassed Carly Beth relentlessly in the initial installment. As the book opens, Steve is telling the reader about how much he hates first graders. See, Steve and Chuck let out a squirrel in the girls locker room, because that sounds like something RL Stine saw in a movie about teenagers once. As punishment for this, Steve is told by his gym teacher that he can either blow up basketballs in the gym by mouth, or coach first grade soccer. It's plausible, that's what I like about that punishment.

The kids quickly take their revenge on this surrogate coach by tricking him into kicking a concrete soccer ball. At this point it is worth noting that the reader is saddled for the next 27 chapters with a character who is fooled by first-grade children into kicking a concrete ball. After practice, Steve runs into Chuck and discovers the kids glued feathers to the books in Steve's bookbag. What the hell is this book, really?

At the next practice the kids send their fattest member to tackle Steve. Steve declares that he will get the kids back by scaring them. Coincidently, at that moment, Carly Beth and her friend Sabrina, are walking near Steve and Chuck and the two boys decide to scare them for old time's sake. I kind of wish someone would take a stab at scaring the reader at some point, but here we are. The two boys attempt to sneak up on the girls but then they notice that Carly Beth is carrying her decapitated head around... of course it's really another plaster head made by Carly Beth's mom, and this whole "scare" is exactly what she did in the first book to these two, and it managed to scare these boys yet again.

The next day, Steve is wearing his Sunday best for class picture day, and he also has to coach his first graders on a muddy field. I'll let you do the legwork on that one. RL Stine drops some serious poetry on the reader as we are told how Steve's blue sweater becomes a brown sweater, and after going home to change, Steve and Chuck head out for the party supply store where Carly Beth bought her mask. But it's... say it with me... abandoned! Luckily the two boys notice that the basement door to the shop has been left open and the two sneak down to steal a mask.

Chuck initially expresses some concern that maybe they shouldGoosebumps #02: Stay Out of the Basement©, but all that changes once they find a box full of disgusting and scary masks (and yes, there is a terrifying gorilla mask in the box). Steve finally decides on an old man mask, which in addition to looking hideous, feels and smells hideous, so I see why he chose that one to put on his face.

The two boys hear footsteps above them from the supposedly abandoned shop, and Chuck ditches his friend Steve, who is now stuck in the basement as creepy, cape-wearing, John Waters Shopkeeper from the first book clomps down to the basement. Steve tries explaining to the man that he wasn't stealing one of his masks, which doesn't work because even his explanation is basically "I came down here to steal one of your masks." Steve offers to buy it, but the shopkeeper will not sell it to him. So Steve makes a break for it and runs out of the basement with the mask-- but he's not stealing the mask, he's... oh so well yeah he's definitely stealing it. He and Chuck run all the way home.

Steve doesn't even tell Chuck about the mask, hiding it under his shirt. Once he gets home, Steve thinks he feels the mask bite his stomach, but shrugs it off because when you have such a cool, smelly, warm, gross mask like that, it's worth a few stomach-bites. Suffer for fashion.

Steve's Halloween revenge plan goes into action on the day before Halloween, as he tells his entire first grade soccer team to meet in front of the haunted Carpenter Mansion on Halloween Night to go trick-or-treating together. With his plan set, he goes home to try on the mask, in hopes of scaring his friend Chuck. However, as soon as he slides the old man mask over his head, it melds to his skin and suddenly he feels tired, like an old man, and starts cackling, like an old man, and has very specific ideas on race relations, like an old man.

After scaring his dog, Steve hears his mom approaching his room. She can't see him like this, it will be like that scene in Big, only less frightening. He makes up an excuse about being sick to explain his old man voice and his mom tells him from outside his door that she bought "those black and white cookies" Steve likes so much. Oreoh no! After his mom goes away, he tries to make it to the phone, but I guess being old is the same as being trapped in quicksand, as it takes several minutes of trying for Steve to be able to hobble in the direction of the phone. Steve reasons that maybe the same thing happened to Carly Beth with her mask and she's know how to save him. When Steve calls her house though, her dad thinks Steve is some creepy old man crank calling his daughter and hangs up on him.

That night, Steve goes to sleep early and awakes to find that it was all a dream, his skin is fine and there's no mask attached. But wait, that was a dream and he really does have the old man mask attached. Twists abound in the Haunted Mask II.

RL Stine leaves no stereotype regarding the elderly unchecked in his delicious satire of morning routines, as Steve craves oatmeal and laments on how he's outgrown trick-or-treating. Steve's plan is to act like the old man costume is his Halloween costume so he can leave the house without alarming his parents. Then he'll go scare the first-graders, then finally find Carly Beth and get the mask removed. Well that's great, I guess I don't have to read the last thirty pages!

After fooling his parents, Old Man Steve approaches the rowdy first graders who were waiting for him in front of the mansion, but unfortunately instead of being terrified of him, the kids immediately become considerate and helpful, asking if he's lost and if they can help him-- which okay I'll admit it, that's pretty good. Even a broken clock is right two times a day. He attempts to convince him that he's the ghost of the mansion, but the kids cry out-- in concern for his safety. Several of the children take turns holding Old Man Steve's hand as they lead him to Carly Beth's house. Unfortunately, Old Man Steve looks too much like an old man and Carly Beth thinks he's the creepy man who prank called her earlier. She runs away to get her dad to call the police. Fortunately, Steve gets Sabrina's attention and her and Carly Beth-- who is dressed in last year's abandoned duck costume (!)-- stop and come back to attend to Steve.

Carly Beth recaps the end of the previous book for Steve and tells him he needs to find his own symbol of love to get the mask off. Steve thinks he knows of a symbol of love, and the two rush off to Steve's house. Once inside, Steve's dog attacks him and Carly Beth has to hold the yapping little dog at arm's length so Steve can safely move around the house. Steve's symbol of love was those cookies his mom had bought him. Unfortunately, Steve's dog ate all the cookies while Steve was out. The dog tries rubbing against Old Man Steve's leg to get him to pet him. Carly Beth realizes that the dog could be Steve's symbol of love. Steve hugs the dog tight and... nothing happens. Carly Beth shrugs her shoulders and figures that maybe it's different for each mask and it must take something other than a symbol of love for Steve's mask to come off.

The two trek off to the "abandoned" party shop and sneak into the basement, which is still unlocked. Scientists are always just hanging around unlocked, abandoned buildings in these books. Carly Beth pokes around some boxes and finds an old tuxedo suit that looks like it goes with the old man mask. She holds the suit up and suddenly the old man mask floats off Steve's head and lands on the collar of the suit. The old man is now complete and alive, thrashing around in the room as Steve is reverted back to his old self. The old man makes a break for it out the basement door and Carly Beth and Steve don't really pay that detail too much thought as they exit, laughing.

But the Twist is:
As they're walking home, Chuck pops out wearing one of the other masks from the shop. Really, that's the "twist" ending, RL Stine?

the Platonic Boy-Girl Relationship:
Carly Beth and Steve, who's youthful vigor disappears halfway thru the book.

R.L. Stine Shows He is Down With the Kids:
If there's one thing kids love reading about, it's the elderly.

Worst Anecdote Ever Told Alert:
"I saw a ghost once, behind my garage. I shouted 'Boo!' and it floated away."

Memorable Cliffhanger Chapter Ending:
Ch. 13/14
Steve can't find his mask: it's gone!
Wait, it's gone because Steve was the one who moved it!

Great Prose Alert:
"I let out a howl of dread."

Conclusions:
The Haunted Mask II is a pretty awful book until the last thirty pages or so when it just embraces the silliness of the situation and goes for laughs instead of "scares." Despite the self-referential nature of the second half (there's even mentions of the Mud Monsters from You Can't Scare Me!), there is absolutely no reason for this book to exist.

The power of words

The power of words.. What power have our words? Who ?, mine? What do I say with courage? Hate? resen…