"Green frogs" is scientifically referred by researchers as "Lithobates Clamitans". There are actually two subspecies of green frogs which are known as the "bronze frog" and the "northern green frog". And, they mostly populate the eastern half regions of the United States and Canada.

An adult green frog can grow at a length of 5 to 10 cm and it could weigh between 28 to 85 g. Surprisingly, females usually grow larger in size as compared to the males.

Here are some photos for a better physical description of green frogs: 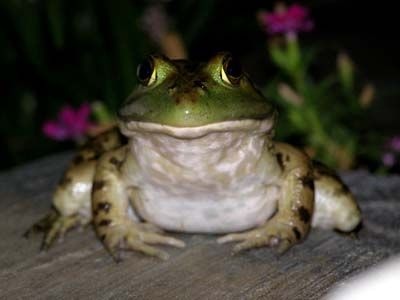 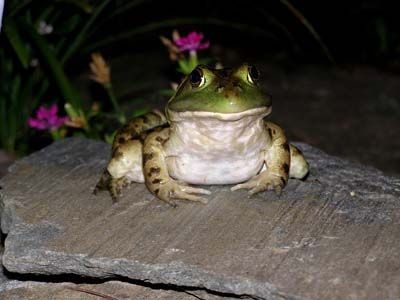 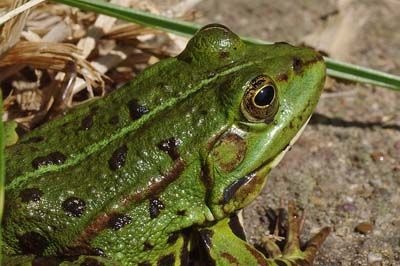 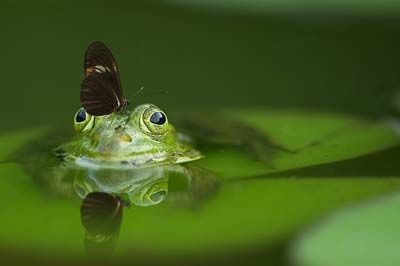 How Do Green Frogs Survive?

Just like any other ordinary species of frogs, green frogs inhabits shallow freshwater ponds, lakes, swamps, streams and other similar form of water-sources. Although, they spend most of their time resting along the shore but when approached by a person or animals, they will immediately leap into the water for protection.

In order to survive, green frogs prey on small creatures such as spiders, fish, shrimps, tadpoles, birds, snails and even other frogs!

Here's an interesting funny video of a green frog preying on a flying insect that I found:

Some researchers claims that green frogs are "highly-aquatic" creatures which means that they don't explore far places with no water. However, there are some juveniles who attempts to go on the land especially with wet grasses and soil.

How Do Green Frogs Reproduce?

Starting from the month of April to August, green frogs will start to reproduce.

The mating procedure between a male and female green frog is that, the male will grasp the female with his forelimbs posterior. At first, the female will release her eggs then simultaneously, the male will also release his sperms that swims into the eggs. The whole fertilization process takes place in the water.

When the eggs have finally hatched, what comes out are green frog tadpoles with olive green color and iridescent creamy-white color on their belly portion. The males will take at least one year before he becomes sexually matured. As for the females, it may either take them 2 to 3 years.

In the United States, green frogs are well-protected by their government's law but not in Europe. You may be surprised to know that green frogs are currently used as a good source of food in France.

Here's a video on how to clean and prepare an edible frog before cooking:

If you do not have any knowledge or experience identifying edible green frogs, it is highly advised not to attempt eating any green colored frog that you may encounter in the forest. It's because you may encounter green-colored frogs that belongs to the poisonous species. Consult the expert before you do.

Frog Hears from its Mouth

So Today We are Going To Talk about Nature... Nature is the best and undescriable Gift To us From Go…

Living in Elliot Lake, Canada, Ontario, Hello my name is Shane St. Louis, A couple years ago I used …