In response to the new event by Micky the Slanted Salerno to support women empowerment, here is another movie review. This time, this review is about the movie Hansel and Gretel: Witch Hunters. Hansel and Gretel are no strangers to us as the brother and sister are the main protagonists in the classic fairy tale we've all  (at least, most of us) grown up with. Again, I will try to give as little spoilers as possible, but be warned that there might be some spoilers ahead. 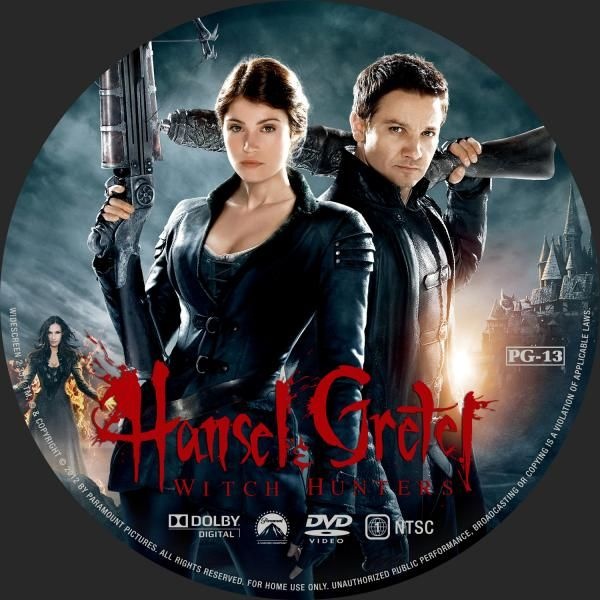 Well, if you've never heard of Hansel and Gretel, here's a quick recap of the classic fairy tale.

Hansel and Gretel: The Fairy Tale 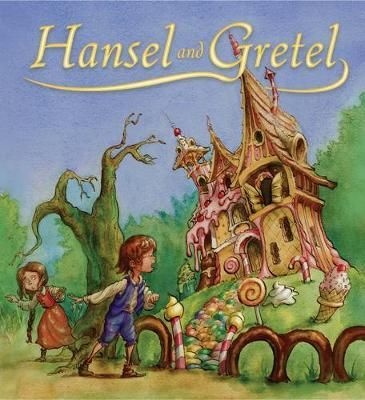 The story starts in the home of a poor woodcutter with his wife and 2 children named Hansel and Gretel. He had little food to offer the family to begin with. So when a great famine swept over their land, they are greatly affected. His wife, blinded by selfishness, urged his husband to ditch the kids in the forest in order to save themselves. Some versions of the story say that the wife is the kids' stepmother which makes perfect sense since she was so willing to sacrifice them. Their father, of course, is against the idea but his wife was very insistent.

The children, who could not sleep because of hunger, heard this conversation. Gretel was distraught with what she heard, but Hansel was a smart boy. He came up with a plan to help them get out of that problem. Just as everyone fell asleep, he slipped out of the house and collected as many white pebbles in front of their house as he can.

The next morning, their stepmother woke them up at the break of dawn to fetch wood in the forest. In the middle of the forest, their father lit a fire and told them to rest as he and his wife cut wood in the forest. Midday has come and gone and their father and stepmother never returned--their worst fears are confirmed. They have been left behind to fend for themselves. But Hansel, being the smart boy that he is, left a trail of the bright pebbles he collected the night before to help guide their way back home. When they knocked on the front door, their stepmother was shocked but their father was secretly happy that they returned home safely. Not to be deterred, their stepmother tried the same trick to lose them. But, this time, there were no more pebbles to guide their way back home. Poor Hansel and Gretel. There was no way for them to find their way back home so they just kept walking and walking.

Three days later, they are still walking and there is no more food left. They fear that they will die out of hunger. Suddenly, they caught a whiff of a delightfully sweet aroma in the air and so they followed it. The sweet aroma led them to a gingerbread house--which is literally made out of gingerbread! Needless to say, they stuffed their face with it. As they were eating their fill, the door of the gingerbread house suddenly opened and revealed a wrinkly old woman. She invited them in and fed them properly. 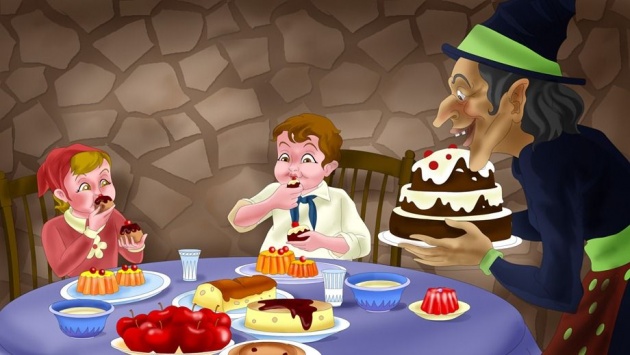 But, she was only pretending to be nice. She was, in fact, a wicked witch who purposely built the gingerbread house as a means to lure the children to her. She had intended to eat them all along. She locked little Hansel in a cage and forced Gretel to cook for him in order to fatten him up. 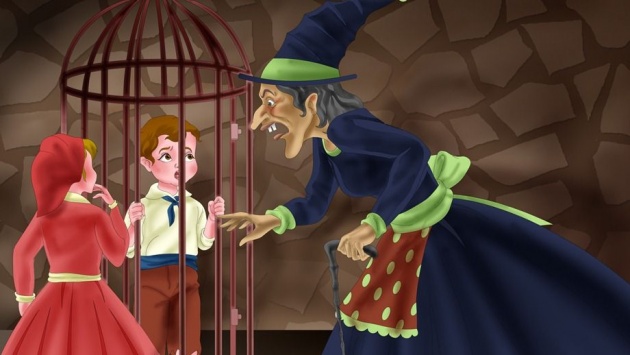 When the witch couldn't wait any longer, she fired up the oven fully intending on cooking Hansel that day. She ordered Gretel to crawl into the oven to check if it's already the right temperature. The witch was planning to lock and cook Gretel in the stove once she is inside. Fortunately, Gretel saw right through the witch's plans. She pretended not to understand and asked to witch to demonstrate for her. Of course, the witch, who was not so bright, complied with her request. Once she was halfway inside the oven, Gretel pushed her inside the oven with all her strength and fastened it with an iron bolt to make sure that the witch cannot go out. As the witch screamed and howled inside the oven, Gretel freed her brother from the pen. both of them are relieved to have escaped the witch's dinner plans. After a few moments of conversation, they have finally decided to return home. But before that, they took as many of the witch's pearls and precious stones as they could carry with them.

The path to their home seemed clearer this time, so they were home in no time. They found their father inside the house and flung themselves into him who was equally ecstatic to see them. The poor man has not had a single peaceful day since he abandoned his children. They showed their father their loot--and since then, they've never had to live in poverty again. 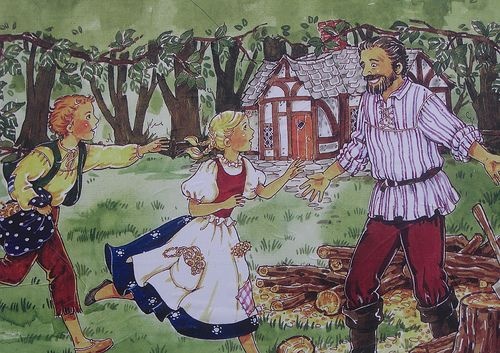 By the way, their stepmother had already perished before they even got back home. A very convenient ending, indeed. But then again, this is why they call it a fairy tale ending. 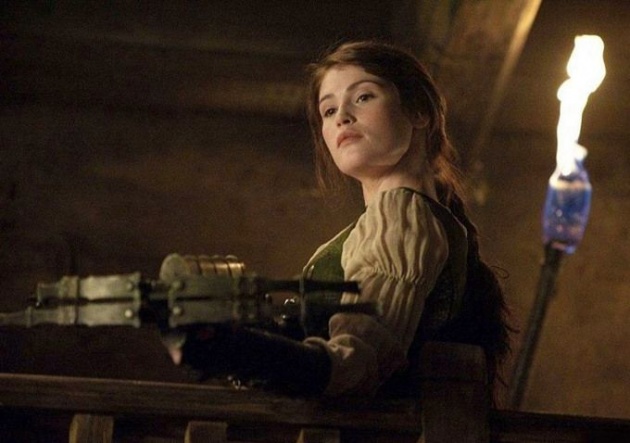 I hate to break this to you, but this isn't gonna be an open casket.

— Gretel to the Desert Witch

Gretel had always been smart, brave, and strong ever since she was a little girl. In fact, she was the one who killed the witch and saved her brother from being eaten for dinner. In the movie, we see her as a grown woman who, together with her brother, travels from village to village in order to hunt and kill as many witches as possible. 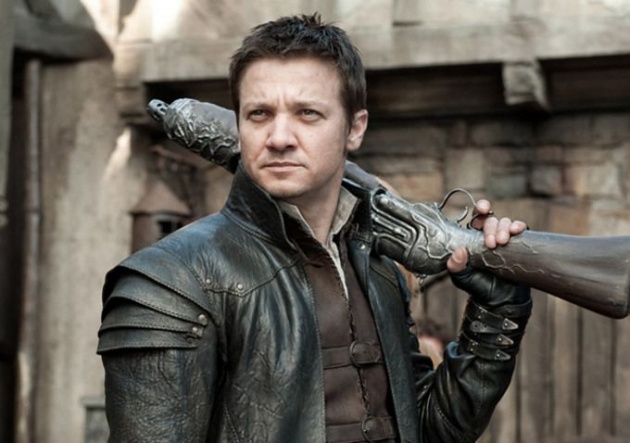 Me and my sister... we have a past. We almost died at the hands of a witch. But that past made us stronger. We'd gotten a taste of blood, witch blood. And we haven't stopped since. ”

Just like his sister, Hansel is also very smart, strong, and brave. After narrowly escaping from certain death in the hands of a witch when they were younger, he and his sister vowed to never stop until all the witches are dead. Hansel as a grown-up is a little socially awkward--which is probably because he tends to focus too much on his job as a witch hunter. He is also insulin-dependent as a result of him being force-fed by the witch with candies as a child.

Hansel and Gretel: Witch Hunters is a dark action fantasy horror comedy film all smushed into one which was written and directed by Tommy Wirkola. This movie was based on the classic fairy tale, but the filmmakers took a few creative freedom and re-wrote the story to make it a little bit darker. 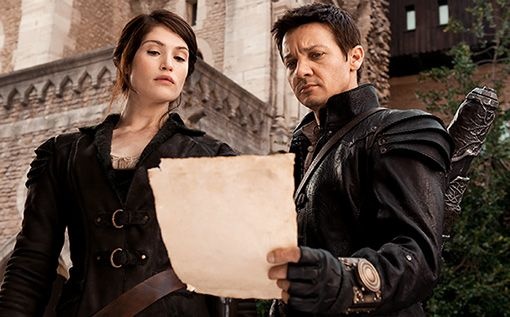 The story was set 15 years after Hansel and Gretel defeated the wicked witch who tried to eat them. The siblings have dedicated their lives to becoming skilled witch hunters and have become the ultimate vigilantes who are hell-bent on retribution. Almost becoming somebody else's dinner changes you, you know. They promised themselves that they won't stop until all of the remaining witches have been destroyed. And now, the brother and sister witch hunting duo face a new threat as the blood moon approach. A great evil that may hold the secret to their past.

This movie got an average rating of 4/10 on rotten tomatoes where only 53% of the respondents actually liked it.

Critics Consensus: Alternately bloody and silly, Hansel and Gretel: Witch Hunters fails as both a fantasy adventure and as a parody of same.

Ouch! That was harsh. Admittedly, some scenes will make you cringe, but it wasn't that bad. Okay, so it probably wasn't the most intellectually stimulating movie ever made, but it was sure fun and entertaining to watch. If you're into funny dark fairy tales, this one's for you. As for me. I give it a 6/10 rating. I'm not gonna give you more details as I might end up giving you spoilers. You should watch it for yourself and form your own opinion.

Before you go, here are a couple of Querlo survey for you.