It has been said, 'time heals all wounds.' I do not agree. The wounds remain. In time, the mind, protecting its sanity, covers them with scar tissue and the pain lessens. But it's never gone.

Heraldry is the Science that dealers with coats of arms and genealogies, or family trees. A knowledge of heraldry can help us trace the history of ancient families. Indeed, heraldry is sometimes called 'the shorthand of history.'

In the past, however, heraldry had another purpose. In freudal times, when a lord went to war, he wanted everyone to know that his army was in the field, So he had his emblem, or a symbol, embroidered on his garments. It was put on the trappings on his horse and on the banner that was raised over the battlefield for all to see.

Very often the symbol would have some direct reference to the lord who wore it. Thus, if an ancient have been killed in a fight with a lion, the lord might choose a lion as his emblem. If he himself was a famous falconer, he might choose a hawk.

Western heraldry is an innovation of the 12th century. Certain members of the high nobility began to display animals, specifically lions on their shields beginning in c. the 1140s. Prior to this, western military shields of the 11th to early 12th century did sometimes show simple decorations, but not apparently tried to the personal identification of the bearer.

-Read more on this source: Wikipedia- 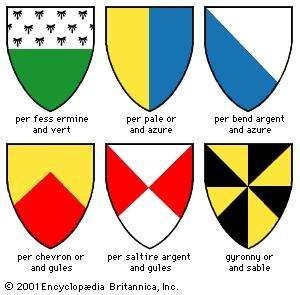 In time, the symbol become the distinguishing sign of the lord and his family. It would be painted on the sailings and sculptured on the walls of his castle or manor. But its most important use was in the battle. Because it was part of the battledress of the lord, it came to be known as his arms. Embroidered on his surcoat (a robe worn over armor), it was called a coat of arms.Because the symbol was always on the lord's shield, it became the custom to draw the arms inside a shield.

English heraldry originated during the times of Normans and their successors. As a result many of the words used in heraldry are medieval Norman French.

The name 'heraldry' came into being because a herald, or messenger, wore the emblems of the lord her served. It was the duty of the heralds to conduct ceremonies and tournaments, and to announce the knights when they arrived. So it was important that they should be able to recognize the different coats of arms.

The manner in which heraldry is described is called blazoning. The escutcheon is the heraldic shield on which the arms are drawn. The field is the surface or background of the shield. 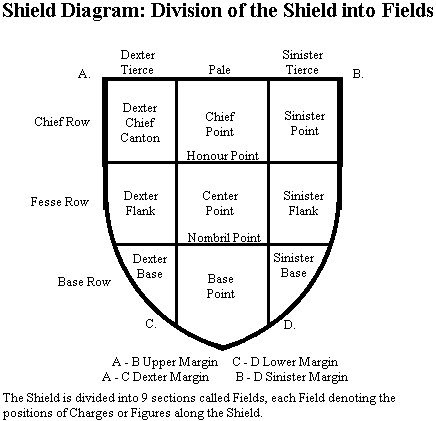 The image above is from Snow Stones. Credit. 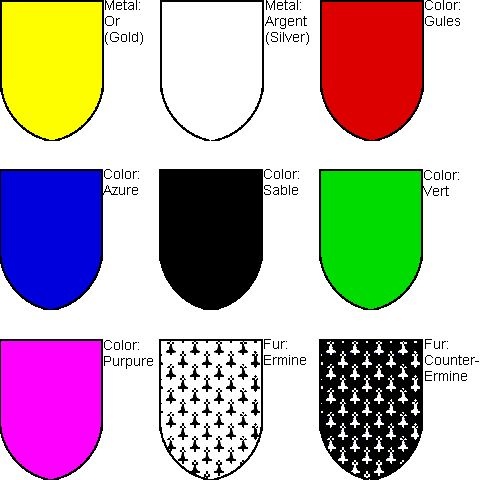 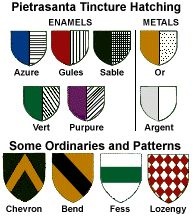 The top third of the shield, the most honorable part, is the chief. Other parts are the dexter (right-hand part), sinister (left-hand part), fesse (center) and base (lower part).

At first heraldic shields were very simple in design; they were painted in just one or two colors. Then bands of colors were added. Soon simple forms developed which came into common use. These were known as ordinaries. An ordinary is often the main charge, or figure, on a shield. Ordinaries were described according to the way in which the bands divided the shield. A vertical band of color is described as pale. A band running horizontally is a fess. Sometimes, shields do not have any charge and the field itself is divided into two or more colors. These shields are described as having  lines of partition.

The lines of partition are also described according to the way in which colors divide the shield. Per bends means that two colors divide the shield diagonally. Quarterly means that a shield is divided vertically and horizontally by two colors into four sections. More complicated designs arise when figures, or heraldic devices, are placed on a plain field, or are combined with ordinaries or lines of partitions. Lions, castles and stars are a few of a more commonly used devices.

Device- A heraldic design used to identify an individual.

Coat-of-Arms- What a heraldic device is called once the owner receives an Award of Arms.

-Read more in this source: modaruniversity-

The colors in heraldry are called tinctures. There are two metals: or (gold or yellow) and argent (silver or white). And there are seven colors: azure (blue), gules (red), sable (black) vert (green), purpure (purple), tenne' (orange) and sanguine (reddish purple). Ermine, vair (squirrel fur) and other furs are also used.

One of the rules of heraldry is that one color may not be used on top of another color, and a metal may not be used on a metal. It would not be, for example, be possible to put a red cross on a blue background. The reason for this dates back to the Middle ages, when a shield or banner had to be clearly seen on the battlefield. Putting a color on a metal made it easier to tell one banner from another.

During the 1300s knights began wearing crests on top of their helmets. Behind the crest a silk mantle hung down to shade the armor from the heat of the sun. A wreath or twisted silk kept the mantle in place. The crested helmet and mantle are usually shown above the shield.

Lords and grand knights have their shield held by supporters. These are human, angelic or animal figures. They stand on either side of the shield, like the lion and the unicorn in the national arms of the United Kingdom. A scroll, with the family motto, was often added under the shield. 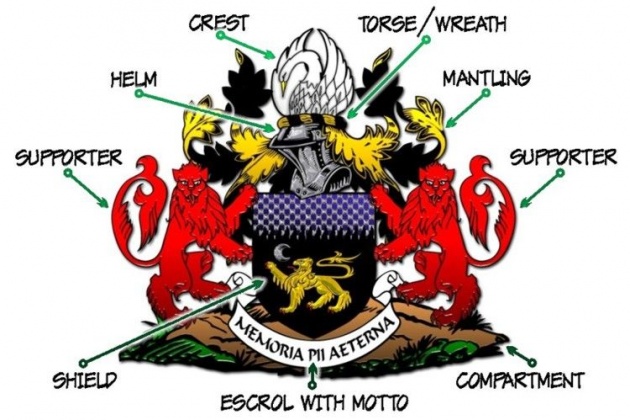 When the coat of arms is pictured with the shield, crest, helmet, and motto, it is known as armorial achievement.

The armorial achievement-shield, motto, helmet, and crest-is often used as a decorative marking on bookplates and over doorways.

FAMILY AND OTHER ARMS

Only the owner could wear a coat of arms and a crest. So he gave his followers clothes in his family colors. These are called his livery. Badges, which had on them the emblem of the lord, were also worn by his followers.

All of the images above are credited to Wikicommons.

The lord's banner was always carried with him. It was a square flag on which was placed his coat of arms. If he did not want his men with him, his standard would be placed where he wanted to meet. The standard was a long flag that showed his livery colors and badge. 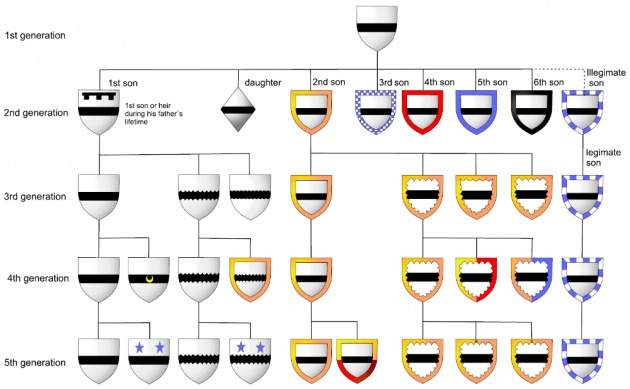 When a lord dies, his arms are passed to the eldest son. While his father is still alive, the eldest son wears a label. The younger sons have a mark of cadency to difference their coats of arms from their father's Daughters have a lozenge. This is a diamond-shaped object with the father's coat of arms on it. Lozenges are also used by widows. When the daughter marries, her coat of arms is combined with her husband's.

Coats of arms are held not only by individuals but also by the cities, countries, universities, companies, and others. These are called Impersonal Arms. Oxford University was granted arms in the middle of the 15th century and the city of London in the 14th century. Eton college was granted arms by its founder, Henry Vl.

sources of illustrations, used by

the author of "Heraldry-Shorthand of History." Credit is listed below:

All rights reserved. No part of this article

may be reproduced without special credit

in writing from the publishers of Wikipedia.