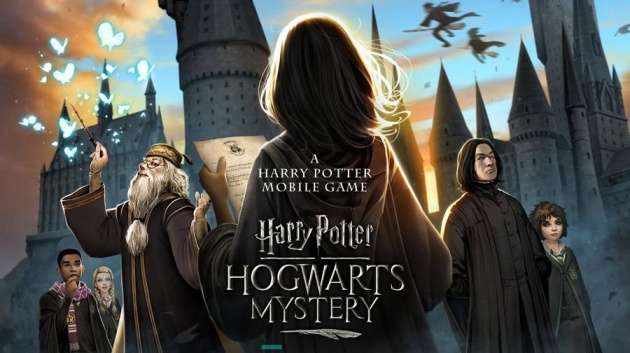 I recently started playing this little game on my smartphone, and found myself quite liking it. So here goes a review of my first year at Hogwarts School of Witchcraft and Wizardry!

Harry Potter: Hogwarts Mystery (which I'll abbreviate in HP:HM  in this post) was developed by Jam City, and released under the Portkey Games label. Beginning in 1984, after Voldemort was driven to defeat and young Harry Potter placed in the 'care' of the Dursleys, the game lets you play a new student arriving at Hogwarts for seven years of education, which includes going to classes, obviously, but also developing relationships, and discovering one (or more?) of Hogwarts' mysteries.


Video credits: The game's introduction by Naotalba via bitLanders


The game is available on Android through GooglePlay, as well as on iOS through the App Store.

HP: HM starts with building your avatar. You have to decide here whether you want to play a witch or a wizard, and that can't be changed unless you restart the game. Then pick among several options of hair, skin and eye colour, as well as hair styles. You won't get any choice in clothing at this point, though more options will open up later in the game.

After defining your character's appearance, the introduction and tutorial takes you to Diagon Alley, where you'll get to meet Rowan, your first future friend at Hogwarts, and introduce yourself. This is where you can choose a name—or let the game randomise one for you. At this point, appearance and name aren't too important: contrary to your sex, you can change them any time during the course of the story. 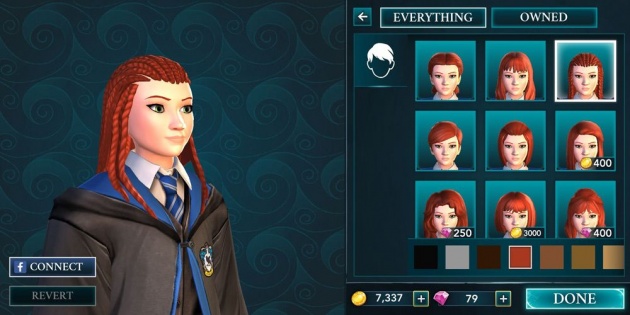 Image credits: Toying with avatar features by Naotalba via bitLanders

HP:HM takes you through your education at Hogwarts. At the moment, I'm still a Year 1 pupil, because I'm taking my sweet time, and only the first three years have been released at the time of writing (Jam City is going to add the rest in upcoming updates), so I can't really comment on further gameplay. I believe it's relatively similar to that first year, though.

When you interact with the storyline itself, you may have to make certain choices. These will impact the outcome of several situations, endear you (or not) to your teachers and fellow pupils, and let you earn characteristics points. 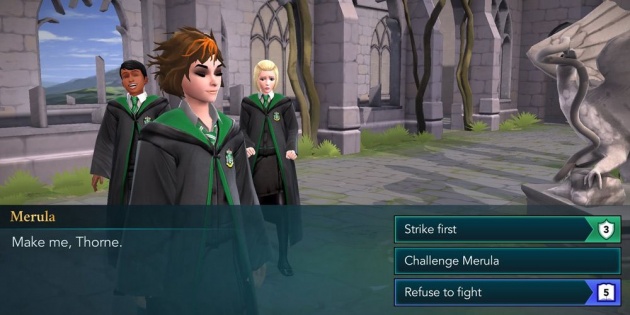 As you can see here, some of the choices available in that scene depended on my stats. Later, my refuse to fight, which I could afford due to my high Knowledge score, allowed me to claim self-defence, which helped me with one of the teachers when we obviously got busted duelling on school grounds.

In the game, your character is defined by three characteristics: Courage, Empathy and Knowledge, which are pretty much self-explanatory. They're important in more than one way: not only do they allow or limit some of the dialogue choices you can make (for instance, very early on, you need to be Level 2 in Courage to stand up to a bully), but they also play a part in duels (where they make your spells more powerful) and games of Gobstones (more about the latter below). 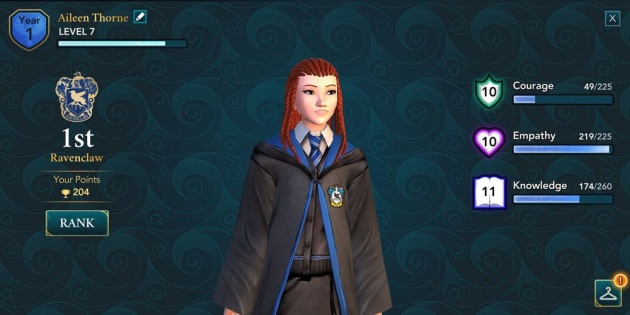 Learning in classes and going through specific storyline events involve spending energy points (you start with 24), and once they're spent, you'll have to wait until they replenish, at the rhythm of 1 point every 4 minutes in real time. You can also use gems to buy energy points, however the cost is really high, so I never bother with that.

Some classes are part of the storyline, such as your first Potions class, or the Charms classes where you learn Lumos, Wingardium Leviosa, and other spells used during the storyline. The rest of the time, you can skip them. However, I don't advise this, because this is also where you can easily earn money and characteristics points. I usually go through 1 or 2 classes during the day, playing now and then (it's mostly a matter of clicking on task bars to complete them), then go through storyline events in the evenings, when I have more time to focus on what's happening. I'm a bit of a grinder, to be honest, so I definitely don't mind doing this. 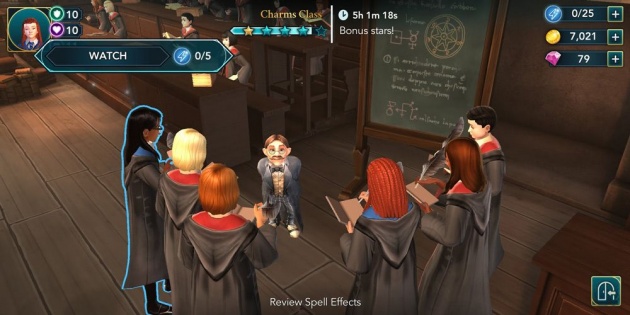 When you complete a task, your character, the teacher or another pupil will say something. This is mostly flavouring, but pay attention nonetheless, as sometimes these bits of dialogue contain information that will be useful to answer a question from a teacher. For instance, during a Flight class, Madam Hooch will mention 'What, you've never seen someone with yellow eyes?', and later you may get a question about what's Madam Hooch's distinguishing feature. In any case, you may want to brush up on your Harry Potter knowledge for those, since they bring you points as well.

In that time, the game will feature characters known from the books during their student years, including Bill Weasley, Charlie Weasley and Nymphadora Tonks. The game also features teachers who were working at Hogwarts during that time including the characters of Rubeus Hagrid, Severus Snape, Minerva McGonagall, Albus Dumbledore, Filius Flitwick and Rolanda Hooch.
— From the Harry Potter wiki at Fandom

Early in the tutorial, it is revealed that you're the younger sibling of Jacob, a former student who got expelled from Hogwarts after becoming obsessed with finding the fabled Cursed Vaults and causing much trouble in the process. From the beginning, you thus find yourself the 'black sheep' of the school, which will colour many of your interactions with other students (and yes, Professor Snape will hate you on sight, no surprise here).

Fortunately for you, and much like in the Harry Potter books themselves, some pupils are just as weird as you, or plainly don't care, and will be your friends nonetheless, like bookish Rowan or skittish Ben. 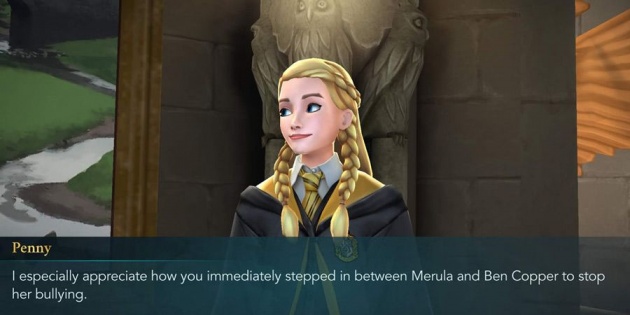 Image credits: Making a new friend by Naotalba via bitLanders

Your interactions with them can strengthen or weaken these relationships, though, so be careful about what you tell them... and don't forget to play Gobstones in the courtyard to earn some appreciated friendship points with them (this is where your characteristics are important, too: if your level in those is less than the one recommended to play with a given character, you'll actually lose points during these interactions, and won't be able to progress much). 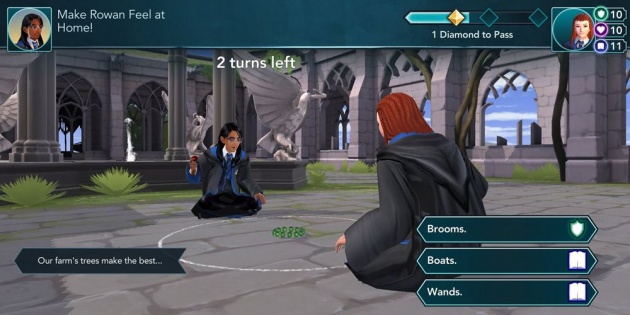 What I don't know yet is if you can make friends later of your current enemies, like Merula Snyde, the Slythering pupil who definitely has a chip on her shoulder when it comes to your character. It'd be interesting to have this happen!

Your character will also learn to duel, which is basically a game of rock, paper & scissors. At every turn, you need to pick a stance (Sneaky, Defensive or Offensive), which is stronger or weaker against your opponent's stance (you don't know what they will choose, so hope to be lucky). Sneaky trumps Defensive, Defensive trumps Offensive, and Offensive trumps Sneaky. Each stance comes with different actions, such as healing yourself for Defensive, or cast an attack spell for Offensive. 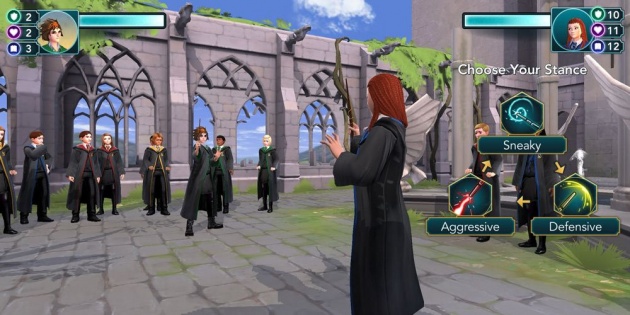 (For the record, my stats were so high compared to my opponent's that I completely destroyed her in that duel... What did I say about grinding again?)

As mentioned at the beginning of the post, I quite like this game. I've wanted to play a Harry Potter game for a while, the graphics and animations are smooth and overall pleasant, and I like having a storyline and choices to make, even though this game is not a visual novel per se.

The stoyline looks simple enough, but so far I think it works well for a Harry Potter game. Your character is from a magical family and has to uphold the family's name now that their brother has squandered it. There's obviously a mystery about these Cursed Vaults Jason was looking for. Also, your character may or may not happen to have visions from time to time, which begs the question: are they actually sane, or are people like Merula right in calling them a danger for the school and the magical community? 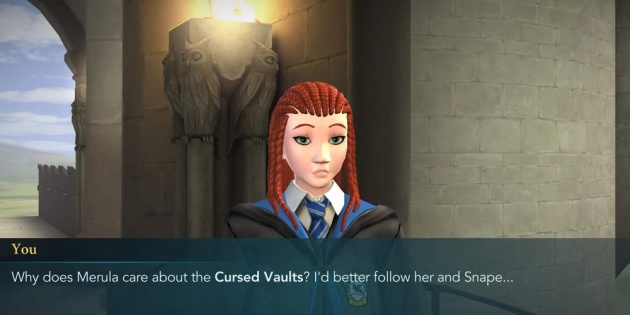 Image credits: The plot thickens! by Naotalba via bitLanders

The game also rests on many of the Harry Potter characters and places, Hogwarts being the most obvious. Since it's set before Harry's school years, it allows for new characters, as well as some who're adult in the books, like Tonks or Charlie Weasley, so the prospect of meeting them is appealing.

There are a couple of limitations that may quickly become annoying, though, and these are the classes, energy management, and gem cost.

The classes themselves can be repetitive since there are only a few actions you can perform; click and spend energy points, trace a wand or potion stirring move, tap a circle to 'focus', or answer a question. It's not that much of an issue for me, but... yes, repetitive.

This is the most frustrating aspect of the game for me. I manage to get around it because I play during breaks at work, and when it's time to get back to working again, I know I have 2-3 hours in between those breaks to let my energy bar fill again. However, at the weekends or in the evenings, I'd like to be able to play for a little longer than just a couple of minutes pressing on class objectives bars.

And the energy problem is compounded by another issue: that of gem cost.

This game has a very aggressive 'pay-to-play' approach, and this can be quite a turn-off.

You've seen it in other games, I'm sure: the game is free to play, but you need to buy gems, crystals, or whatever that game's currency is in order to achieve more. In some games , it's manageable enough. For instance, in Doctor Who: Legacy, which I also play, Time Crystals allow you to buy new characters, or you can expend one crystal if you lose a puzzle game; however, not buying extra characters or costumes doesn't prevent you from progressing, and if you lose, you can always redo the puzzle, or level up your team on easier puzzles until you're able to complete it. Contrast this with Choices (which I used to play, but stopped for that very reason), where the best choices are only available with gems. This means that unless I buy gems, I can never pick the choices I really want to pick!

HP:HM is somewhere in the middle. As long as you're patient, you don't exactly need to buy gems. When you unlock a specific story event, you can choose to pay some 50-60 gems to play it right now, or wait 2-3 hours until it's available to you. So waiting is an option. Nevertheless, the cost is really prohibitive—I might consider paying from time to time if it was, say, 10 gems to unlock an event or fill in my energy bar... but certainly not more. Worst, if you want to buy extra hair styles or clothing options for your avatar, the cost is absolutely abysmal (I'm speaking hundreds of gems here). Well, the cost is bad in coins, too, but at least these you can easily get by grinding, since lessons will pay 1000 gold coins at times. 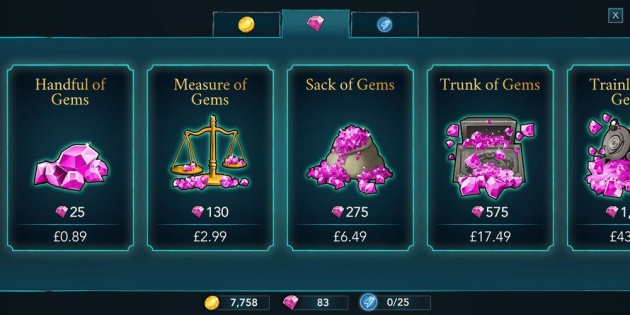 All in all, I do enjoy Harry Potter: Hogwart Mystery well enough, and I'm patient enough that the gem cost isn't too much of a problem for my gameplay. If you're like me and you like the Harry Potter books and movies in general, well, give it a try.