How Filmmaker Andy Salamonczyk Is Promoting His Movies Online

"When someone reads a blog post or watches a film on Film Annex, their followers and friends can see what they're doing, and it becomes a snowball effect. It's very simple now to promote your work online, it's an important part of filmmaking that we should all take advantage of." - Andy Salamonczyk

Andy Salamonczyk is a short film director from the UK who likes to create unusual characters that the audience will like. He's also working with Fuzzy Duck Creative studio, another member of Film Annex and has worked on the crew of several of our Film Annexers' movies. His films, behind the scenes videos and blogs about his work and ongoing projects as well as his social media film promotion skills make him a good candidate for Eren's Picks.

Below is an interview with Andy about how he's promoting his movies online. He also gives some tips to aspiring filmmakers on how to get an audience.

Film Annex: When did you start promoting your work specifically on social media platforms?
Andy Salamonczyk: It must have been a couple of years ago when I started to realize how filmmakers were easily able to reach their audiences on the Internet. Social networking has become such a big part of our lives now,  so much that a simple tweet could attract a vast amount of attention for your film. You no longer need to find a physical place to promote your work, as websites such as Facebook, Twitter and Tumblr have taken over, and it can be at a click of a button. It works on both sides, as audiences can pick and choose what they see on the Internet. It gives us filmmakers a chance to reach our target audiences.
FA: What social media platforms do you use? Which ones do you think are more efficient for filmmakers to use to promote their work and why?
AS: I think right now Facebook and Twitter are the most efficient platforms. Checking these sites has become a daily task for us, you look around for example at a train station, and everyone's on their phones. Facebook is great for promotion because it's all about looking at what your friends are up to. If my mate 'likes' a short film on Facebook, I'd be interested in seeing what it was. Twitter is about getting your opinion heard, and you can get a lot of interest if you connect to tweeters correctly. My films have attracted much interest on both platforms, but I think Twitter is more efficient in getting work seen by your target audience.
FA: Did you make interesting contacts or create business opportunities by sharing your work on social media?
AS:Festivals have got in touch with me, and vice versa, about screening my work, and often you are able to connect with other filmmakers to share methods. Sometimes people will see your film at a festival, and they'll want to know more about it. All they have to do is search it on a social media platform and they'll be able to watch a Behind The Scenes as they're walking out the theater! 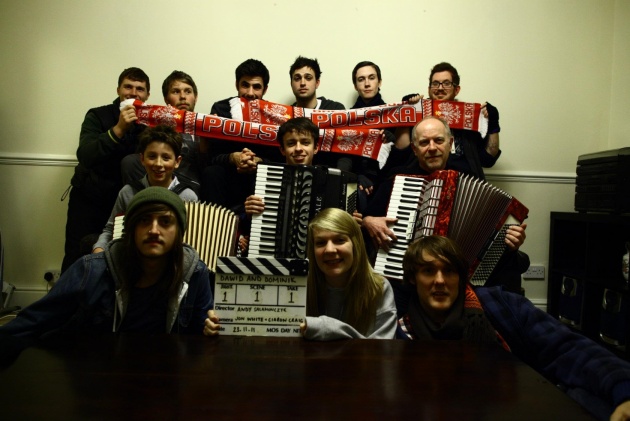 Andy Salamonczyk (2nd row, center) with the cast and crew of his film Dawid and Dominik.
FA: Give us an example on how you promote your Web TV or work in general on social media?
AS: I often tweet out my blog posts and videos to my Twitter followers. It's a good way of letting people know what you're up to, and it's good to give an insight into your films. I blogged a while back the fact that I'm making a new short next year, and this means that actors and audiences can take note of this and look out for future updates. About a year ago, I emailed a Polish Magazine based in the UK about my film Dawid and Dominik, asking if they wanted to write an article on it. I didn't get a reply, but then I started promoting the film through social media platforms and emailed them again, showing them the popularity the film has got. They decided to write an article on myself and the film after seeing that!
FA: Did you see a change on your revenues on Film Annex after promoting your Web TV on social media?
AS: I noticed a difference on my revenue, because when someone reads a blog post or watches a film on Film Annex, their followers and friends can see what they're doing, and it becomes a snowball effect. It's very simple now to promote your work online, it's an important part of filmmaking that we should all take advantage of. When it only takes a few clicks, why wouldn't you do it?
FA: Do you have any tips for other filmmakers on how to promote your films on social media?
AS: Know your audience, find that audience, and speak to them! We're in an age where we no longer have to organize an event to attract interest for our work, it's ever so simple. My advice is take advantage of this. Us filmmakers have never had it so easy. Your film is nothing without an audience. If you're waiting for a train to come, or for your dinner to cook, go and connect with your audience. It only takes a few clicks.
Click here to read more about promoting films online and on social media platforms.