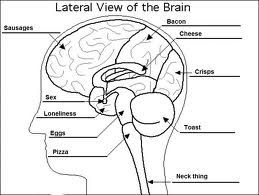 As we deeply study about human Brain we will conclude that it is very complex. In human brain we have neurons which are the cells that generate action potentials and convey information to other cells; these constitute the essential class of brain cells. 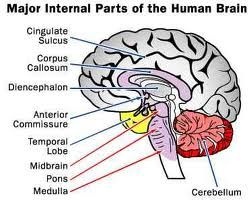 In addition to neurons, the brain contains Glial cells in a roughly 10:1 proportion to neurons. Glial cells form a support system for neurons (Glia is Greek for “Glue”). They create the insulation myelin, provide structure to the neuronal network, manage waste and clean up neurotransmitters. Most types of Glia in the brain are present in the entire nervous system. Exceptions include the oligodendrocytes which myelinate neural axone (a role performed by Schwann cells in the peripheral nervous system). The myelin in the oligodendrocytes insulates the axons of some neurons. White matter in the brain is myelinated neurons, while grey matter contains mostly cell soma, dendrites and unmyelinated portions of axons and Glia. The space between neurons is filled with dendrites as well as unmyelinated segments of axons; this area is referred to as the neuropil. 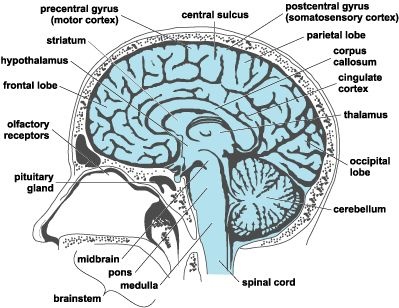 If we compare with mammals we see that mammal’s brain also contains connective tissue called the meninges a system of membranes that separate the skull from the brain. This three-layered covering is made of from the outside in, dura mater, arachnoid mater and pia meter, the arachnoid and pia are physically connected and thus often considered as a single layer, the pia-arachnoid. Below the arachnoid is the subarachnoid space which contains cerebrospinal fluid, a substance that protects the nervous system. Blood vessels enter the central nervous system through the perivascular space above the pia mater. The cells in the blood vessel walls are joined tightly, forming the blood-brain barrier which protects the brain from toxins that might enter through the blood.

The brain is bathed in CSF (cerebrospinal fluid), which circulates between layers of the meninges and through cavities in the brain called ventricles. It is important both chemically for metabolism and mechanically for shock-prevention. For example, the human brain weighs about 1-1.5 kg. The mass and density of the brain are such that it will begin to collapse under its own weight. The CSF allows the brain to float, easing the stress cause by the brain’s mass.

In today’s lecture we have discuss human brain and also compare human brain with the mammal brain. In next lecture we will discuss about Anatomy of Brain.