I am passionate about blockchain technology because its potential is truly untapped!

Bitcoin and other cryptocurrencies commonly referred to as Bitcoin 2.0 projects, have the potential to alleviate the worst forms of poverty in the world, it can also enable upward class mobility to self-driven individuals. To enable the middle class to grow, to create niche industries and to essentially allow every single human being to have the potential of being his own banker and mini-entrepreneur. Have access to global markets, and enable for greater access to trade especially in areas that are facing economic sanctions (who is at fault anyways, the citizens, or some odd politicians from both sides).

A great Catholic saint in the medieval ages, known as Saint Thomas Aquinas a Dominican friar of the Order of preachers says that individuals can be able to live a virtuous life, if they have their basic necessities met. Many in the world today are barely struggling to keep a roof and food on the table, they are burdened with credit problems, and a perpetual form of slavery through shark interest rates they have on their assets. How can one be able to survive given the rules of the game that are imposed on us? The answer is simple, you change the rules of the game to your advantage. House always wins, once you realize this, then you change your game plan. Sometimes there is no alternative, but now we have one the difference is that it needs to be explained in a manner that a 5 year old can understand the gist of the message. Real freedom, in the true sense of the word, that is as understood by the philosophical tradition of realism. The ability to do good is freedom, the freedom that most worldlings think is freedom is libertinage. This is not what interest me, because libertinage is a form of self-enslavement to the baser passions, individuals who live like this are not truly free. Bitcoin can enable honest business owners, to own as much as it is possible the means of production to cut out as much as possible the middle man who keeps taking a cut from his hard labor. Sometimes it is necessary to have this, because they are offering a service, but now this service everyone can have at a relatively low cost (ensuring the security of the system in this case I will say the bitcoin miners, but it could theoretically be any other 2.0 bitcoin like crypto asset).

Bitcoin will enable everyone in the world (once the proper infrastructure is set up) be able to better negotiate their wages, by essentially holding his own assets and property. One example of this is the rise of banking like institutions that are setting up full-reserve banking systems, as opposed to fractional reserve system that has been prevalent in the past centuries in the Western world (exported through globalization nearly everywhere in the world). The infrastructure right now is being built to enable a world where not even an internet connection will be necessary to transfer value for value, internationally or personally. The internet of things will be a global phenomenon, that is cheap connected devices to the internet, in your household items, shirt, glasses, watch, shoes, toilets, will enable you to interact with your environment without compromising your security, because there will be blockchain technology protecting your privacy, but at the same time having ease of access. This is the great power that bitcoin offers, and what is best is that it will lead to  better governance in places where there has been nothing but corruption. This future is possible, under the assumption that some worldwide catastrophy or conspiracy take place, such as all governments in the world conspiring together to destroy blockchain p2p currencies in their infancy  (which will be really impossible, unless they go worldwide dictator brutal). The more likely scenario is what we see in reality today a seeming slow, but sure adoption by various government agencies around the world of this technology to solve serious problems in international finance, voting and other serious modern problems. What we are seeing are many future applications of crypto blockchain technologies to reduce the cost of government and have better accountability to its citizens thereby increasing the common good of society. We already see Mexico, the Philippines and many other countries (especially smaller players) who want to join the big leagues implementing their own experimental versions of their currencies. Crypto is here to stay, and my hope is that people can take advantage of it sooner rather than later.

Bitcoin and its intrinsic properties can better serve individuals who wish to practice true virtue and live a Godly life, survive and thrive in a world of uncertainty. People can be able to be assured that their assets if they are wise (I say wise, because a frivolous foolish man can throw away opportunities) enough can be protected, way too many people have unjustly had their assets frozen precisely, because they have followed their principles and properly formed conscience. It is time for us to take the keys of the bank, and live a more open transparent life while preserving at the same time your due privacy. Both of these are possible, imagine a world where banks serve the people!

This is particularly what excites me about BTC and its crypto alternatives. Smart property will enable the poor to buy stuff without having a credit score check. People will be able to rent without having to give too much information gathered, or have a background check (beware repo man, bitcoin is going to take your job!). Trustless reputation systems will help people essentially trust total strangers, think of Uber & Airbnb on steroids. Smart contracts will greatly reduce disputes, in the USA especially we have a huge problem of trying to litigate every single possible wrong done to us. Wall street will be a thing of the past, and everyone could be a trader if they wanted to be one (not that I recommend it, but it levels the playing field and reduces Cronyism a.k.a. rent sitting). Dispute resolution through the court system should be the LAST resort, in the few potential areas where it needs to be enforced. Open transactions will truly make modern banking transparent, trustless servers will be the future. Identity theft, will be reduced to a small market, since we will not have to have centralized places where the incentives to gain this information will be rendered null and void. Government spying is going to increasingly rise in cost, to the point where it is going to be futile to attempt it, since blockchain technology can store our information in an encrypted trustless manner.

Everyone will become more productive, and your assets will be so liquid that essentially everything you do will be monetized (advertising will be voluntary instead of forced everywhere around you). Investing in yourself will essentially be to live a more honest life, because fraud/corruption can only thrive in a system where it is dark and moisty. All of this is already possible today, this is what is amazing. The problem of double spending has been the most important problem solved in the history of humanity, because it enables the upgrade of the digital age to its full potential. In a few words a lot of the modern amenities everyone loves in the first world, will be more available to the third world and real soon. Banking, insurance, credit, loans, private police, health insurance and lastly in near future we will have free internet for everyone in the world it is the next logical step. Many of these things are only available to the top middle class in the world, its time to reduce the suffering of our fellow brethren in the world. Become actively involved through coding, education, entrepeneurship,

Can I have an Amen! Remember Rome was not built in a day, it takes a lifetime to enable the next generation to use these tools in their God given proper manner. I wish you all the best, and may this post inspire those on the fence to take the jump. 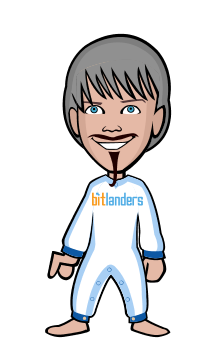