Just imagine for a moment going on national television as your true self for the first time. What a feeling that must be.

It’s even more intimidating, we’d imagine, when you’ve been told you’re representing an entire community. That’s where we find Caitlyn tonight, just ahead of her big ESPYs speech and wrecked with fear.

Its All About The ESPYS 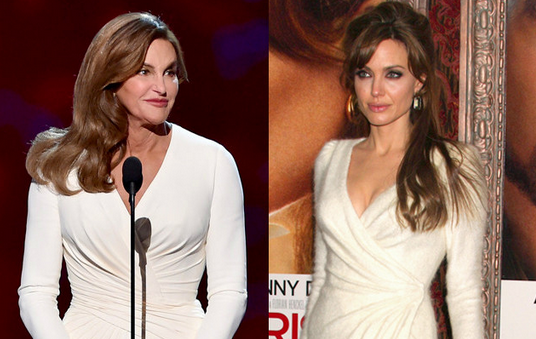 Looking ahead to her big public coming out, Cait’s thinking about everything she has to get ready before the ESPYs. First up: what is she going to wear?

No worries, it’s Cali … there’s always a stylist there to rescue you. And this one’s had some famous clients. Jen Rade has styled Pink, Zoe Saldana and Angelina Jolie, among many others, and now it’s Cait’s turn.

One take away from tonight: Caitlyn loves Angelina’s style. Let’s get this pair together soon, thanks. (We later find out that Donatella Versace designed her instantly iconic white dress.)

The conversation soon shifts to high heels, which Cait admits she’s feeling like an expert in. Some, however, she thinks exaggerates her height too much.

“I don’t want to be out in the media where they ask stupid questions,” Cait tells Jen. Don’t worry, we’d ask only the good ones!

As she locks down her look, she moves onto something she’s terrified of messing up: her speech.

Even after everything she's been through in her life, this @ESPYS speech is number one. #IAmCait

It will become the first time we got to hear directly from Caitlyn while she embraced Caitlyn, so it’s a big deal. Especially for Cait, who suffered from dyslexia as a child.

“(It’s the) biggest pressure thing I’ve ever done,” Cait tells her friends of the speech. “People die over this issue, no one was dying at the (Olympic) games.” That line still gives us chills.

Surrounding herself with love and devotion, Caitlyn continues to draw her strength from her family. Her sisters are there to support her and her mother, the superhero-like

Esther, is coming. Esther broke her hips shortly before the ESPYs, but made sure she could come to support Cait.

In fact, everyone is there for her: Candis Cayne, all 10 of her kids, Diane Sawyer, trans advocate Janet Mock. Well, everyone but Kris Jenner … more on that later.

The love she has is simply beautiful. She goes out on the stage and delivers her perfected speech.

“I’m standing there, all Caitlyn, totally out. I’m feeling so vulnerable,” she says. But the vulnerabilty, Cait, helped you drive home the importance of trans visibility. Bravo.

Yes you sure did Chandi! #IAmCait

As any good Kardashian fan would know, Caitlyn’s a big golf fan, so it doesn’t come as a surprise when she wants to apply to join a newer section of her old course.

But she wants to join as “Bruce.”

Through filling out the necessary paperwork, she feels it would be better to apply as “Bruce Jenner,” not the newly out and proud Caitlyn she’s always been interally.

Most of her friends are shocked at this. Candis tells her that they’ll move her locker from the men’s room to the ladies’ and that they’ll have to “get over” any awkwardness some around her might feel at the “conservative” club.

In the midst of all this locker room drama, she joins Chandi Moore at a support program she leads called Blush. It’s a group for gender non-confirming youth and it seems like a remarkable place.

At the top of their discussion? The extensive and discriminatory journey to change one’s legal identity

Police officers, at face value, are taught to ask for licenses as a default form of identification, but when you’ve gone through a great amount of physical change, your new identity may not match what the law says you are.

A few of the trans men and woman share their experiences being bullied by cops, being made a spectacle, being treated less than human all because there is this perceived disconnect between gender and identity.

Perhaps that most fascinating tidbit of knowledge learned tonight was the difficulty it changing your legal gender. It varies state by state and can include undergoing gender confirmation surgery … which some of the woman point out as flawed and outdated.

Luckily for Cait, California is one of the better states for trans rights. She begins the process to make it all legally official.

After some epic teasers and what looked like a delicious cheese platter, we only got to see Kris’ first words to Caitlyn — well, until next week.

“Oh my god, look at you. Nice shoes!” More on what she has to say next week.

Nicki Minaj in the house

A sexual assault evidence kit is logged in a biology lab in Houston on April 2, 2015.(Photo: Pat Sul…