In the ‘land of the free’ some speech stays taboo 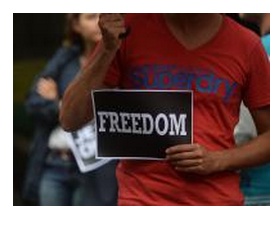 Freedom of speech is a cherished US value -- one heralded this week after the deadly attack on Charlie Hebdo -- but commentators have questioned why there is no obvious equivalent to the French weekly on American newsstands.

If Charlie Hebdo wanted to be published on “any American university campus over the last two decades it wouldn’t have lasted 30 seconds,” New York Times columnist David Brooks wrote Friday in a piece titled “I am not Charlie Hebdo.”

“Student and faculty groups would have accused them of hate speech. The administration would have cut financing and shut them down,” Brooks wrote.

“In my opinion, there is no magazine that occupies a similar place in the American marketplace that Charlie Hebdo does in France,” columnist Tony Norman told AFP.

Norman argued to his readers in the Pittsburgh Post-Gazette that Americans are “too respectful of political authority and too wary of offending religious sensibilities or upending racial taboos to even try.”

The American media market does have a few standard bearers in the satire business: “The Onion” and “Mad” have a dedicated following.

In television, the television program “South Park” regularly pokes fun at religion and politics on the Comedy Central channel, while avowed atheist Bill Maher stirs up controversy on HBO.

The US First Amendment, hundreds of years old, guarantees to anyone the right to speak as they please. Offensive speech is protected by the same amendment and Americans generally find it’s better to discuss than to prohibit.

In 1988, the US Supreme Court upheld the right of Hustler magazine to lampoon a prominent pastor by suggesting he had a sexual relationship with his mother.

“Criticism of specific religious beliefs and practices is generally considered taboo in American society,” Speel said, pointing out the US was created by a diverse group of religious dissidents and migrant populations.

While covering the attack in Paris, major newspapers like the New York Times, The Washington Post and CNN have refused to reproduce the controversial cartoons under debate, so as not to offend Muslim readers.

Charlie Hebdo ran because it was “essentially run by a group of friends who had known each other for years and shared the same sensibility,” said Arthur Goldhammer, who teaches at the Center for European Studies at Harvard University.

Here articles and illustrations have to be approved by a number of people from various backgrounds before they are published, Goldhammer said.

“So ‘provocative’ material is more likely to be flagged as offensive, because it is scrutinized by people with different points of view,” he said.

The cultural and social taboos are more powerful than other prohibitions, Speel said.

“There is a famous line from the TV show ‘The Simpsons,’ where the preacher’s wife exclaims ‘Won’t somebody please think of the children!’ Speel said.

“That line, used to indicate that children should be shielded from speech about sex, or profanity, or other salacious language, or against any other threats or fears, describes well the common American attitudes toward public displays of sex, nudity, or profanity.”