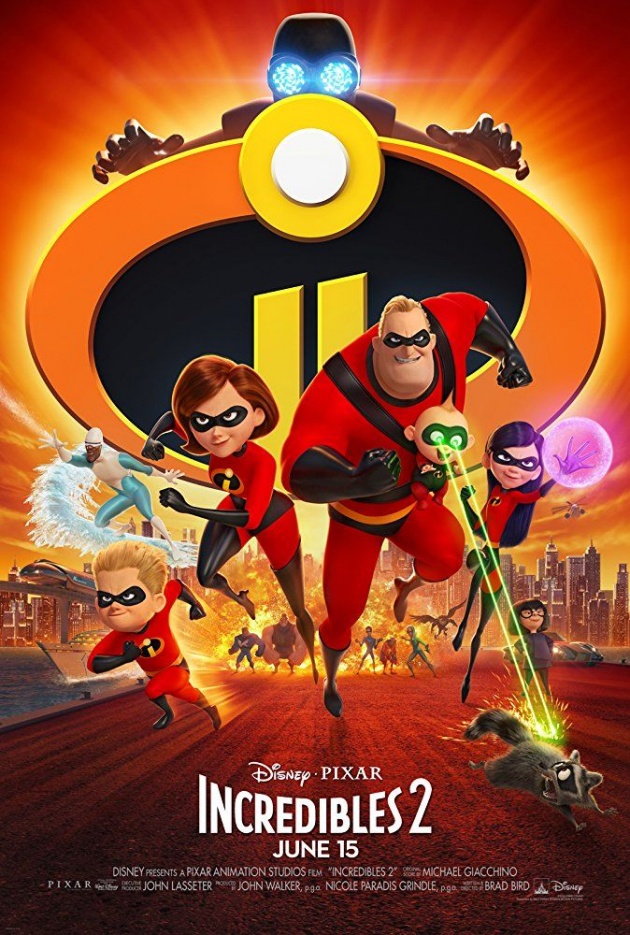 After 14 years, The Incredibles  2 is finally here!. I’m glad the movie has a sequel.  Yes, I waited for it, and I actually had expectations. The Incredibles did an applaud job proceeding from where they left off with the Parr family and the Underminer. As the first part of the movie, Brad Bird writer and director of the superhero franchise animation keep the storyline without any member of the Parr family aging.

The Incredibles is truly an engaging story of a superheroes family struggling to overlook villainy because it is illegal for them to act.  Even with a deter constitution; it could not stop the strong-willed family performing their civic duties.

Yet again, Brad Bird ingenuity took us deep into the Parr Family everyday struggles. The animated movie was budget for $200,000,000 and made a cumulative worldwide gross of $1,242,598,825. I will say it was worth the wait!

Did the 14 years wait of the animated movie worth it? Did I enjoy the movie in general & it’s ending?  Let’s find out how I feel about the Incredibles  2

The Short Story of the Movie

The family of heroes at battles the Underminer who just appeared from under the city of Metroville. The family prevented the destruction of the city but failed at apprehending the Underminer from robbing a bank and escaping with the money.

This collateral damage caused the government to shut down the Superhero relocation program and Rick Dicker has to put the family in a motel for two weeks off his own free will. Unfortunately for Violet, the love of her life Tony Rydinger discovers her superhero identity, thus forcing Rick Dicker to erase his memory. That same night, Frozone told Bob and Helen about the offer from Winston Deavor, a wealthy businessman.

Winston and his sister Evelyn propose sending the hero on a secret mission (even when heroism is banned) in order to regain public acceptance. The aim of the mission is to record and see the actions of the hero from the heroes point of view. These video feeds can help the public to see the struggles as heroes tries to save the world.

Bob has the tendencies to cause collateral damage, thus after a cost analysis, Elasticgirl becomes the logical choice of the programme.  While Helen was away on missions, Bob struggles with his new role as a stay at home parent to look after the kids.

Mr Incredible became overwhelmed with parenting as Dash is having trouble with math, Violet was stood up by Tony unintentionally because of Dicker wipe his memory.  Jack-Jack wreaks havoc with an uncontrolled surge of superpowers. Bob had a bad time sleeping, keeping up with the change in math, a first date disaster date after Tooony stood Violet up.  Bob couldn’t withstand the heat, so he took Jack-Jack to Edna Mode. She develops a suit that controls and anticipates Jack-Jack superpowers.

Meanwhile, Helen did her first-night hero work by saving a runaway train when the supervillain Screenslaver Hypnotize the train driver. She later caught and unmasks the Screenslaver as a deliveryman with no recollections of his previous actions.

The Winston announces a summit of world leaders to legalize heroisms onboard a luxury yacht. The incident with the deliveryman seemed far-fetch, therefore, Elasticgirl went on a little research on her own about the Screenslaver. Helen realized that the deliveryman was mind-controlled by a pair of goggles imbedded in his mask.

Evelyn forces the same goggles on Helen to mind-control her.  Evelyn revealed her hate for superheroes. As a child, Gazerbeam and Fironic failed to rescue her father from being killed by burglars, therefore she planned to sabotage her brother's ambition and effort to tarnish every ounce of bring-back-the-heroes.

Using ElasticGirl as bait, she lures Mr Incredible and also sends superheroes to the Parr Family to subdue the children. Frozone was overwhelmed by the heroes sent to the Parr family and also mind controlled.

The Parr children escaped with the help of Incredibile. The car was Bob high-tech vehicle during his glory days. The hypnotized superheroes subdue the ships crews and recite a vindictive manifesto before redirecting the ship to Municiberg and destroying the ship's controls.

Jack-Jack seeing his mother with an unusual glasses used his powers to remove the goggles thereby freeing Elasticgirl. She, in turn, freed Mr Incredible and Frozone. The Incredibles realized that by removing the goggles from every superhero, they can free them from mind-control of the Screenslaver

When the first animated movie appeared back in 2004, I joyfully watched and enjoyed every scene of the movie. It was perfect and  way advanced for its time.  However, after 14 years of waiting, the sequel twist was not to my expectation.

Incredibles 2 regresses to a time when any power woman managed to acquire was carefully controlled so as not constitute a threat to the male order. Such nostalgia is self-defeating

As an animated movie enthusiast, I find this movie really lacking the merits it deserves. A sketchy diversion from the male protagonist to a female heroine into the same categories of Red Sparrow and animated movies like Frozen and Mulan.

We have waited for 14 years, the sequel was supposed to polish to the contemporary era, epic gigantic and well adjusted to exploited Jack-Jack superpowers. Unfortunately, this movie was basically centred on women power. The plot just switched from Mr Incredible to Elasticgirl.

Settle down, are you kidding? I’m at the top of my game! I’m right up there with the big dogs! Girls, come on. Leave the saving of the world to the men? I don’t think so

At some point, the animated movie became predictable including the appearance of the villain, the plot and ending.

Some of the scenes in the movie where not packed with the intense tension expected. Thanks to the quality of pictures, sound and connecting scenes to make the movie close to the taste I had expected.

To my better judgment, there are but few scenes that made the animation stand out. Saving the ambassador from the helicopter, the tracking and capturing of the fake Screenslaver. These are the few epic scenes in The Incredibles 2. Animation fans will soon realize that the plot and scenes are too sudden and predictable, unlike the first movie. 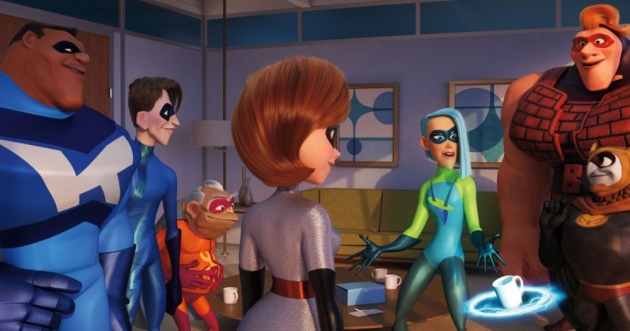 I think Brad did a lousy job in writing and directing the movie. However its success worldwide, he could have done a better job with Mr Incredible, Elasticgirl, Screenslaver and Jack-Jack character.

With the exception of Jack-jack who is developing superpowers, the characters did not evolve. Mr. Incredible, Elasticgirl and Frozen character where not utilize because the villain character is not a superhero and very weak.

The prowess of Jack-Jack & his outstanding courage in turning into the demon baby was the only effort that deserves a recommendation. Mr Incredible mundane lifestyle at home with the kids and Elasticgirl need saving has a canning resemblance to the first movie where Mr Incredible needs saving.

For the first time we have waited for a sequel for fourteen years but it did not thrill me. Instead of the tragic incident that may seem to split the family, it turns out an enslaving film with a powerful car Incredibile.

The Technical Side of the Movie

Animation like Justice League Dark and Constantine City of Demons, have great effects unlike The Incredibles 2.  The movie's effects were poor & gloomy. The storyline lack twists and turns of the sequel ingenuity The colours blending, the city structure were perfectly in place  for the anticipated animated movie. 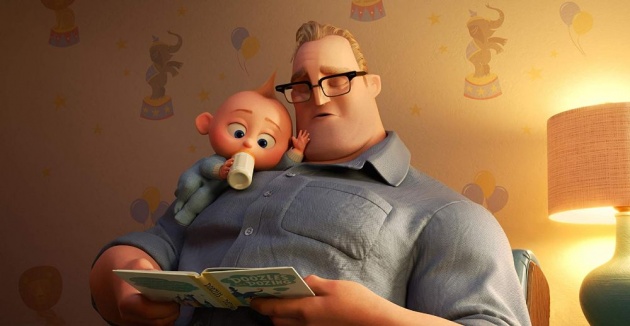 On the contrary, while the movie has a sketchy storyline focused and dedicated to women empowerment than the average heroism we have seen thus far.  It is an undeniable fact that the actions scenes were fast and too short.  The animation, however, lacks good villainy. Screenslaver was way weak, to begin with. The discovery made by Elasticgirl of Evelyn as the Screenslaver was too soon and way easy! It really wasn’t that fantastic to write an animation which is well expected with such a cliché villain.

The collective works of the actors

One of the greatest pleasure of the Incredibles 2 was the originality of the storyline. I’m glad I enjoyed the continuity from 14 years ago in the movie. It is a privilege to write a movie review of a movie that took this long to make a sequel.

The movie was voiced by Craig .T.  Nelson as Bob Parr/Mr Incredible, Holly Hunter as Helen Parr/Elasticgirl,  Sarah Vowel as Violet Parr, Huck Milner  as Dashiell Parr, Catherine Keener as Evelyn Deavor, Bob Odenkirk as Winston Deavor  and with Samuel .L. Jackson as Frozone in their respective character representation. Together they have made Incredibles 2 a movie toreached  over a billion dollars in worldwide view. It gladding me to say it was the works of the actors that made the incredible 2 the movie it is today.

Is the movie any good to watch?

Although the movie made it big and had a general acceptance, it still did not deliver to my taste and expectation. The director Brad Bird puts Elasticgirl in the spotlight and Bob was left with parenting, it was an unexpected twist in the storyline.

Furthermore, the animated movie was centred on how to balance work and family affairs. It depicts that even superheroes with their powers have it difficult in taking care of their family.

Meanwhile, Elasticgirl feels guilty about missing her sons’ first seventeen powers, as Bob also feels been sidelined in the fight for bring-back-the-heroes to single stay at home parent.

Ultimately, the movie depicts the characteristics of a family struggling to adjust into a society that deserves them but don’t need them. A baby with many powers and can’t control them.

Brad Bird has keen eyes noticing how normal families deal with everyday struggles; cope with hardship and with parenting teenagers. It  will definitely make you laugh, put a smile on your face, and hopefully make you appreciate the roles placed by your parents in making life easy.

On a Final Note

Incredibles 2 is an animated film that was well expected. It really nailed it when it comes to the fact, men find it difficult to take good care of the children and a single parent (especially the male) may find it worse. Every family struggles with a couple challenges; together they can overcome anything especially when they have superpowers.