India said on Tuesday it would firmly defend its 3,500-km- (2,200- mile-) long border with China after domestic media reported a new face-off on the disputed frontier, just days ahead of a visit by President Xi Jinping. 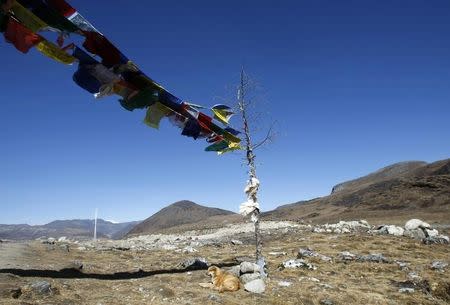 A dog rests on the Indian side of the Indo-China border at Bumla, in the northeastern Indian state of Arunachal Pradesh, November 11, 2009.

More than 200 soldiers of the People's Liberation Army crossed into what India considers its territory in Ladakh in the western Himalayas last week, and used cranes, bulldozers and a Hummer vehicle to build a 2-km (1.2-mile) road within it, the Hindustan Times said.

Indian soldiers challenged the Chinese troops and asked them to withdraw, the newspaper said. Then on the night of September 10, soldiers demolished a temporary track built by Chinese forces.

There was no immediate comment by India's defense ministry.

Both China and India are trying to put a positive spin on Xi's first summit meeting with Indian Prime Minister Narendra Modi since the Indian leader took office in May. He arrives on Wednesday after touring the Maldives and Sri Lanka.

The two countries are expected to ramp up commercial ties and open the way for Chinese investment in Indian infrastructure, including railways, but the contested border remains a stumbling block to better political ties.

Both lay claim to vast tracts of territory and after two decades of talks are no closer to a resolution of a border dispute over which they went to war in 1962.

They have not even been able to agree on the Line of Actual Control where the two armies are deployed, leading to frequent reports of border violations.

"Let me assure you that our brave sentinels on the border will address any issue that happens on the border," said foreign ministry spokesman Syed Akbaruddin. "We are confident that our borders are in safe hands."

Modi and Xi will discuss the border dispute this week, he added.

India has reported a jump in border violations in the past two years that military experts say is a sign of greater Chinese assertiveness on the frontier. The government itself has sought to play down the incursions.

They have listened to this band is very good, with a great rhythm and in my opinion is one of the be…

APPLE VS FBI " ALL YOU NEED TO KNOW

The legal tussle between Apple and the U.S. Federal Bureau of Investigation (FBI) over access to the…

Adults might as well flip a coin if they are trying to determine whether a child is lying. A new stu…