Indian Neck Hall is perhaps famed American Archictect Ernest Flagg's greatest residential project.  Indian Neck Hall is a 115-room replica of the White House, built of red brick and limestone and finished in 1897 with 300 workers. Indian Neck hall sat in the middle of 3,000 acres of prime Long Island waterfront.  The structure was built for Singer Sewing President, Frederick Gilbert Bourne and his family, and now is owned by and operated as the St. John's University LI Campus in Oakdale, NY., on the Great South Bay overlooking the water with a view of Fire Island, NY.

Flagg was also known for building the first skyscraper in New York City, The Singer Tower (1906), and "The Towers", Bourne's Castle in The St. Lawrence River in upstate New York  along the Canadian border (another blog on that property is listed on our home page).  Flagg also built Bourne's beautiful tomb at the famous Greenwood Cemetery on the highest point overlooking NY Harbor in Brooklyn, New York.  Flagg also worked for the Astors and Vanderbilts and several other prominent families of the day.

Bourne began aquiring the land in 1880, shortly after he built the Dakota apartments for the Clark Family, who owned 50% of The Singer Manufacturing Company, producer of Singer sewing machines. Bourne also lived at the Dakota during his stays in New York City.  Much of the Long Island site had been known as the Ludlow Oyster Farm, but the Oysters disappeared and Bourne took over the property.  He had a grand vision for what became his impressive main residence.

Because the land was largely marshy from the waterfront back to the house some 600 yards away.  Bourne had his team of landscapers dig into the ground in front of the Mansion and irrigate a series of canals for his wife and children to enjoy rowing.  Bourne had the dirt moved from the front to landfill in the marshy backside of the home, so there would be beautiful huge lawns to stroll to the water's edge.

Also known as the Bourne Mansion, Indian Neck Hall had a ballroom for 300 people with the largest pipe-organ ever installed in a residence anywhere in the world!  FGB grew-up the son of George Washington Bourne, a church minister, and sang in the Trinity Church Choir in lower Manhattan, and never lost his love of music.  Often, after dinner, he would take his children into the ballroom and sing with them, while he played the Grand Aoelian Organ (he sat on their board as well).  The house also contained an Oval Office, which was used as a second-floor dining room with magnificent views to the water.  Below was the back portico / patio, where parties roared during the summers of the Twenties.  And , a curved line of Greek Revival Columns protected the front door that was reached from a circular driveway with a beautiful fountain as the centerpiece.

In the Hall's basement, there was a bowling alley, a 5000-bottle wine cellar, and indoor swimming pool.  On the first floor: a lovely library facing the back, and spectacular wood-paneled dining room complete with a hidden 'walk-in' safe that we believe hasn't been opened since at least 1926, when the family sold the main house and some surrounding land for 2.5 million dollars to La Salle Military Academy, who in turn sold it to St, John's in 2001.

The rest of the property is equally Gatsbian!  There is a large boathouse and wharf that served his 282' Steamship Yacht, The Alberta and other boats that he had in his fleet.  He also served as Commodore of The New York Yacht Club (NYCC)  from 1903 through 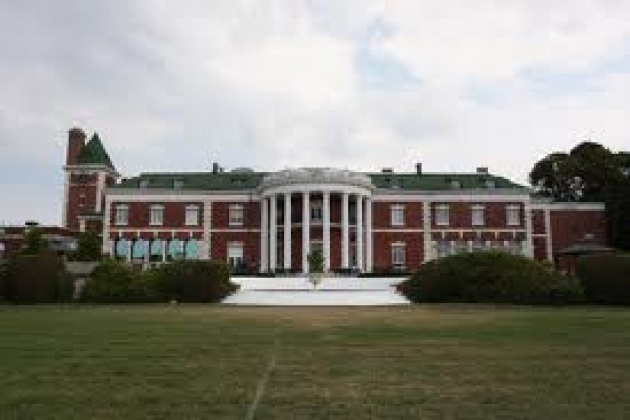 1906.  In 1905, The NYYC won the first TransAtlantic Sailboat Race sponsored by King Wilheim II of Germany.  The winners received what was supposed to be a solid Gold Trophy Cup, however the King's Cup was found to be gold-plated and caused a little bit of an uproar.  Story goes... that Wilheim II made good on the Gold Cup and replaced it, very embarrassingly!  Back to the Boathouse, inside was a ballroom with stage for an orchestra to play if they decided to have a party by the water.  There were beautiful stables for the horses, and his favorite Stallion was "Royal Flush", he was a great horseman.

Indian Neck Hall had it's own golf course, now apart of the West Sayville Country Club.  Today's WSCC clubhouse was known as Meadow Edge back in the day, it was a parcel of land and home that FGB gave to his daughter Florence Bourne Hard as a wedding gift in 1908, when she married Anson Wales Hard Jr. a Wall Street Stockbroker and son of a coffee magnate.  The family's patriarch, Ken Hard, a grandson of the Commodore, grew-up in that house.

During winters there were tobbogan runs and ponds, where the boys played hockey and the girls skated.  And, summers were filled with sails to Fire Island where they played in the dunes.  It was a self-sufficient property, having an extensive farm with botanical gardens.  State-of-the-art irrigation system and water towers throughout the property.  Indian Neck Hall was originally lighted by candles, then gas, and elctrified in 1908 by Thomas Edison's electrical company.  Today, Indian Neck Hall is used bt St. John's University for graduations and special events, and they rent out the Mansion for weddings, of which I understand they had over 80 of them last year.  What was the original property has been sold-off over the years, and now exists the aforementioned West Sayville Country Club and Glof Course, The Long Island Maritime Museum another family home by the water that was converted in 1966.  A gated-residential community of waterfront homes and several other parcels down to the Sayville - Fire Island Ferry.  The original property spanned from Oakdale to West Sayvile to Sayville from the waterfront back to the Montauk Highway.

Next Door, was W.K. Vanderbilt's Mansion known as 'Idle Hour' originally built as a wooden hunting lodge in 1877, then after a fire ravaged it, a new Idle Hour was built in 1899, also as spectacular as Indian Neck Hall.  It comprised about 1900 acres west of Bourne's Mansion and is now Dowling College.  Bourne and Vanderbilt were good neighbors and helped to develop the surrounding area as well as the LI transportation systems, by building and / or renovating several of the local train stations, the Long Island Motorway (the main road through Long island), and the Nassau County Community Hospital, etc.  For anyone interested in the Gilded Age lifestyle of this period, it is well-worth the trip to see how these titans of industry lived.

Hello, everyone! I hope you all are fine and waiting for my new blog ;) I am here with another topic…

and to depend on the paper is the major source of climate change that is exhisting now a days.It is …

Golf- the Royal and Ancient Game

Paganica, a game like modern golf, was played by the ancient Romans, who used a bent stick and a fea…