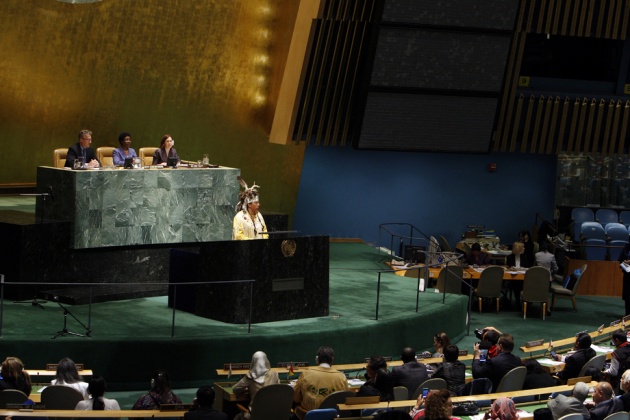 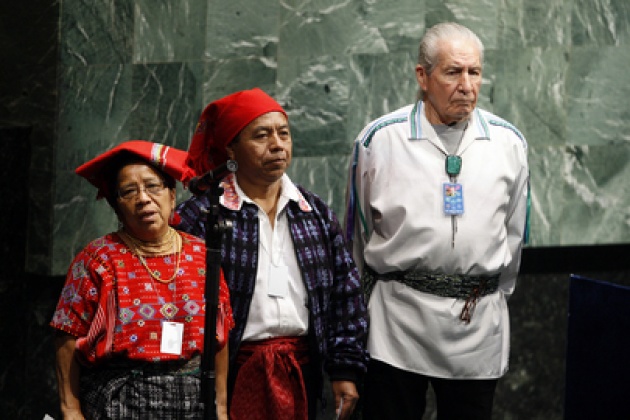 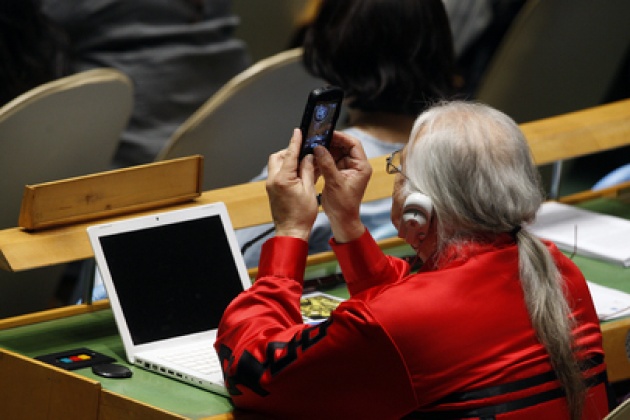 “Those schools were premised on this idea that indigenous peoples were inferior to the general population, their cultures and civilizations were inferior, their languages were not to be spoken, children had to be taken from their families and communities and placed in these institutions to begin the gradual civilization and Christianisation of our peoples. As if our history and our cultures and our languages were not important,” stated Grand Chief Edward John as he his personal experience in such a school in Canada and the impact of the system of Indian residential schools on the indigenous community. As Chairperson of the UN Permanent Forum on Indigenous Issues as the session convened this week at UN Headquarters in New York, Chief Edward John was addressing the media and reflecting what was succinctly defined as the “subjugation, exploitation, domination” imposed upon Native Americans and many Indigenous as a whole. See Film for Blog Report– “Legacy of Exploitation, Subjugation & Domination”

Tonya Gonnella Frichner of the North American Onondaga Nation expressed to the media that the Forum should conduct an international study on the effects of what she called the “Doctrine of Domination” on indigenous peoples’ health, physical, psychological and social wellbeing, and human rights. “We are recommending that the Permanent Forum on Indigenous Issues conduct an international study on this doctrine and look at the effects that the Doctrine of Domination has had on our health, our physical, psychological and social wellbeing as well as our human and collective rights.” She said the Doctrine of Discovery, which has its roots in the 15th century and was expounded by the United States Supreme Court in 1823 as a concept of public international law, was "incompatible" with the Declaration on the Rights of Indigenous Peoples.

Activists for indigenous rights offered that 5 years after the UN’s Declaration on the Rights of Indigenous Peoples was adopted, a great deal remains to be done to realize the objectives contained in that landmark document. Adopted by the General Assembly in September 2007 after more than two decades of debate, the Declaration is a non-binding text that sets out the individual and collective rights of indigenous peoples, as well as their rights to culture, identity, language, employment, health, education and other issues. According to UN News Centre Story: On 17 May, Secretary-General Ban Ki-moon will convene a high-level event to mark the fifth anniversary of the adoption of the Declaration, reflect on good practices and assess the document’s role in fulfilling the rights of the world’s indigenous peoples.

Republic of Congo a Bright Spot:

One of the apparently brighter stories was from the Republic of Congo where indigenous peoples are not divided from their culture, land and leaders. Minister Bienvenu Okiemy said the objective of the Republic of Congo (Brazzaville) was to allow indigenous people to “tell the government” what they wanted for the organization of their land and community, and how they wanted to “participate in the life of the Republic”. As Chief Edward John contrasted his experience in North America, participants congratulated the Republic of Congo, one of the poorest countries in the world, on its recent adoption in 2010 of a law improving indigenous people’s access to education, health care and protection. The law has been hailed by the UN Children’s Fund (UNICEF) as a “milestone” and an example for other countries.

The Issues on Agenda:

Almost 2,000 indigenous participants from all regions of the world will meet at the UN over the next two weeks. Issues to be addressed include:

---the rights of indigenous peoples to food and food sovereignty,

---the situation of indigenous peoples in places such as Central and Eastern Europe,

---the World Conference on Indigenous Peoples slated for 2014, and

---the special theme of “Doctrine of Discovery” – the way courts justified the annexing of indigenous lands – and the right to redress for past conquests.

The Harm of Emotional Abuse in the Society

Hello guys, Recently, I've been experiencing and was a witness of very strange situations between t…