Jihad (English pronunciation: /dʒɪˈhɑːd/; Arabic: جهاد‎ ǧihād [dʒiˈhæːd]), is an Islamic term referring to a religious duty of Muslims. In Arabic, the word jihād is a noun meaning "struggle" or "resisting". A person engaged in jihad is called a mujahid, the plural of which is mujahideen. The word jihadappears frequently in the Quran,[1][2] often in the idiomatic expression "striving in the way of God (al-jihad fi sabil Allah)".[3][4][5]

Muslims and scholars do not all agree on its definition. Within the context of the classical Islamic law, it refers to struggle against those who do not believe in the Islamic God (Allah) and do not acknowledge the submission to Muslims,[6] and so is often translated as "Holy War",[7][8][9] although this term is controversial.[10] According to the Dictionary of Islam[3] and Islamic historian Bernard Lewis, in the large majority of cases jihad has a military meaning.[11] Javed Ghamidi states that there is consensus amongst Islamic scholars that the concept of jihad will always include armed struggle against wrong doers.[12] It was generally supposed that the order for a general war could only be given by the Caliph (an office that was claimed by the Ottoman sultans), but Muslims who did not acknowledge the spiritual authority of the Caliphate (which has been vacant since 1923)—such as non-Sunnis and non-Ottoman Muslim states—always looked to their own rulers for the proclamation of a jihad. There has been in fact no universal warfare by Muslims on non-believers since the early caliphate. Some proclaimed Jihad by claiming themselves as mahdi, e.g. the Sudanese Mahommed Ahmad in 1882.[13]

Others have given the word wider definitions. Many observers—both Muslim[14] and non-Muslim[15]—talk of jihad having two meanings: an inner spiritual struggle—the "greater jihad"; and an outer physical struggle against the enemies of Islam—the "lesser jihad"[3][16]—which may take a violent or non-violent form.[17]

Jihad is an important religious duty for Muslims. A minority among the Sunni scholars sometimes refer to this duty as the sixth pillar of Islam, though it occupies no such official status.[18] In Twelver Shi'a Islam, however, Jihad is one of the ten Practices of the Religion.[19] 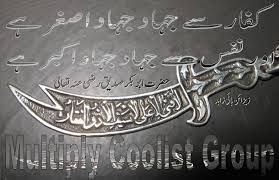