Journey of a photographer

I have been doing photography for about 6 years already and I've had several different types of cameras from film to digital , It's an amazing hobby.

I started out on a Nikon D3200 that my dad bought me when he decided to get me immersed in the world of photography as I'd usually spend my day with frustrating videogames.

I started my learning by making mistakes and trying to improve on my mistakes and gradually growing more into how to build my skills.

I learned to slow down my mind and watch nature run it's course in my neighbours garden while they went camping, I learned my understanding of bee's and other insects and just watch them go by without disturbing them.

I've never went to a photography class and I'm 100% self taught.

4 years went by and my dad was diagnosed with terminal brain cancer. Half a year of taking care of him and trying to keep him safe was not the best life I could imagine as it was scary and confusing for the most part.

He passed 3 months after and I moved in with a friend under the ownership of his mom and dad. I had my Nikon d800 and it was amazing what I could do with it. From a cold winter to a hot summer . I finally moved with more family.

I stayed at a hotel that was a terrible mess but it was all I could find for at least the beginning of 2017.

After a few events my Nikon D800 was stolen from my room and so after 3 months I moved in with my brother and his wife until I could find a home.

Thankfully family and friends helped me replace my Nikon D800 with a Canon Eos Rebel T6.

Of course they don't compare but it was all I could afford.

So even though I have lots of noise and the t6 isn't my fave.

I still live with what I have and it does very well.

in 2018 around February I changed my photography name from ShaneStLouisPhotography to TwentySevenSinsPhotography.

I work now at a sand casting factory named RuskCast under a very friendly and understanding boss.

I'm gradually going up in level at the foundry but I just need to be patient.

I'll probably save up for a Fujifilm xt3 or a Nikon Z7 but I don't know yet. 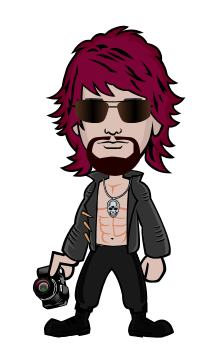 My inner machinations of my mind are an enigma…."Spills Milk"