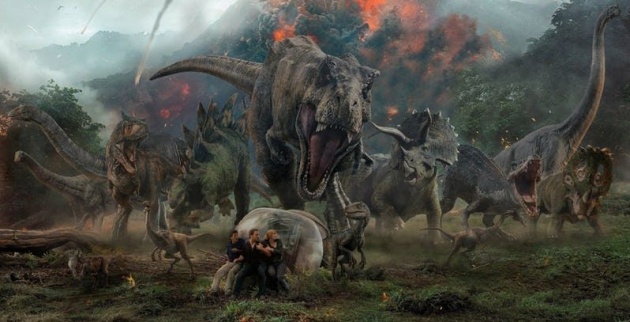 Spokesman "Do these animals deserve the same protection given to other species? Or should they just be left to die?"

Dr. Ian Malcolm "These creatures were here before us. And if we're not careful... they're going to be here after. Life cannot be contained. Life breaks free. Life... finds a way."

We Want the DNA

A two man minisub is making its way through the water. The beams from its lights shine on what is actually a pair of immense doors, which start to open. Above the water, it's a dark and stormy night on Isla Nublar, and the doors open into the Mosasaurus lagoon in Jurassic World. One of the men looks nervous and the other tells him that anything in the lagoon would be dead by now. Which is definitely tempting fate.

The men in the sub are after DNA from the Indominus rex, and its skeleton is in the lagoon. Once a piece of bone is cut off, it's attached to a float and rises to the surface, and a dark shape passes overhead. A helicopter lifts off from the land to retrieve it. (Okay, why pick a dark and stormy night as the time to do this? Not only does it make flying a helicopter more risky, it also limits visibility. Surely it would have made more sense to just wait a little while until the storm had passed?) 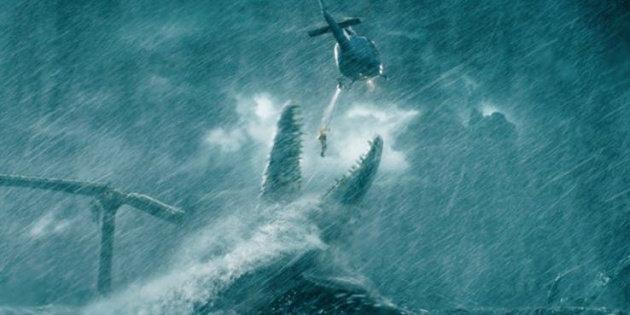 The minisub makes to leave, but there's an enormous mouth behind it. Above the water, its lights vanish. On land, a man is trying to raise the minisub, so that he can shut the gates. The helicopter, when it lands, notices something in the trees behind him - a Tyrannosaurs rex. Finally, he does too, and he flees, dropping the tablet he was using to close the gates in the process. Which gets stepped on and the lagoon gates remain open. The man gets on a ladder that the helicopter has dropped for him, and manages to escape the T. rex. He isn't so lucky regarding the definitely not dead Mosasaurus, which rises out of the lagoon and swallows him. The helicopter heads off to whoever wanted the DNA sample and the Mosasaurus appears to be heading out to open sea through the still-open gates. (Seriously, why were the lagoon doors big enough to let the Mosasaurus through anyway? That's not the sort of creature you want to escape!) 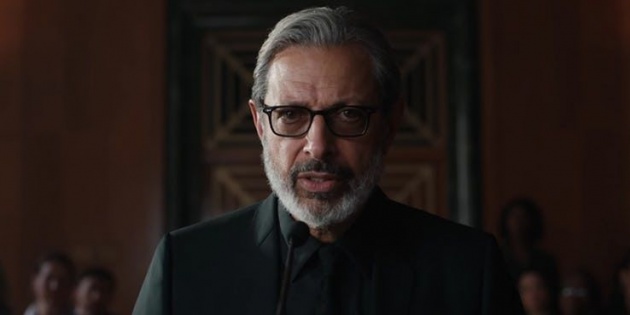 In three years since the events of Jurassic World, the previously dormant volcano on Isla Nublar has become active again, and will wipe out all life on the island. Essentially the lost world is going to be destroyed by a volcano. This is not really a new idea; commonly in fiction there is a lost world where dinosaurs have survived for tens of millions of years, only for a volcano to pick the precise moment that the region is discovered by the outside world to erupt. The only difference here is that the dinosaurs have been created, not survived. Dr. Ian Malcolm is giving evidence at a government committee on whether the dinosaurs should be rescued from destruction. His opinion: It's a bad idea. So is genetic engineering.

Claire Dearing, the former head of Jurassic World has, in the three years since the park's destruction (which events have so far cost the company that owned the park hundreds of millions in damages), become the head of the Dinosaur Protection Group. This is an organisation that wants to save the dinosaurs from being wiped out. When the U.S. government agrees with Dr. Malcolm not to rescue the dinosaurs, it looks like she's failed.

A call from a representative of Benjamin Lockwood and an invitation to his California estate looks more promising. At the estate, where the terminally ill Lockwood lives with his granddaughter Maisie, Claire is greeted by Eli Mills, who runs Lockwood's charitable foundation. Beneath the rather out of place manor are the labs where the dinosaur DNA was originally sequenced. Lockwood used to be a friend of John Hammond - he even has an amber-topped stick - but they had a failing out over something. 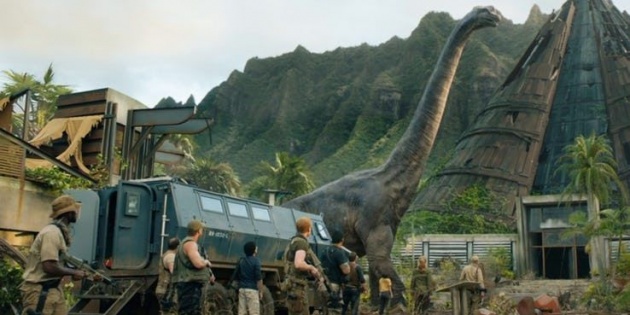 Lockwood plans to rescue at least 11 species of dinosaur from the volcano. More, with Claire's cooperation. Eli says that they need Claire's hand to activate the locator beacons that all the dinosaurs had implanted. In particular, they are after Blue, the Velociraptor that Owen Grady trained. The saved dinosaurs will be transported to a new island, where they will be left in peace. Owen and Claire have split up, but she finds him and asks him to come along. He does.

Claire also takes two colleagues, paleoveterinarian Zia Rodriguez (who has never seen the dinosaurs she specialises in) and systems analyst Franklin. Franklin is the comic relief for the film, and is terrified of meeting a T. rex. Admittedly, a pretty rational fear. 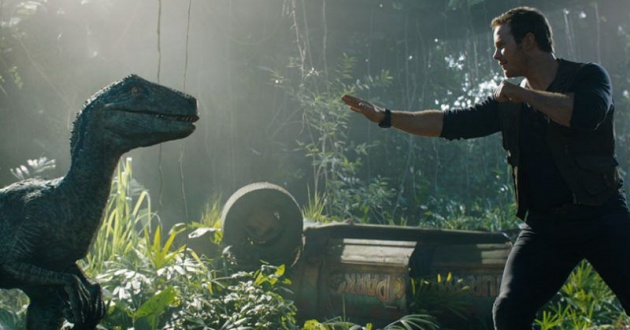 There is already a substantial force of what look like mercenaries on the island, led by Ken Wheatly, who have already recovered quite a lot of dinosaurs. The motives behind the rescue mission are not exactly what was stated; once Blue is found, Claire, Owen and Franklin are no longer useful, so are abandoned and left to die on an island with an exploding volcano. Zia still has some utility and is taken along. So the rest have to get off the island without being killed and foil the evil plans that are afoot. It turns out that dinosaurs are pretty valuable.

Sidebar: That's Not a Realistic Eruption!

Fallen Kingdom takes quite a few liberties with how volcanic eruptions, and lava, behave. The lava approaches very close to Owen at one point and, not only does he not feel any heat from it (despite, by the looks of it, actually getting some on him) the lava doesn't even seem to be setting all the flammable material alight. In another scene a dinosaur has MOLTEN ROCK drip on its face and suffers from just a bit of an ouchy. Rather than having its face burnt off! 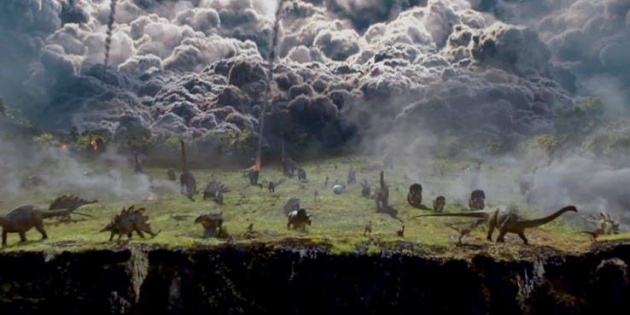 There's also the scene as Owen and a lot of dinosaurs run out of the cloud caused by the volcano's eruption, which is generally known as the pyroclastic flow. This cloud moves much, much faster than anyone can run (up 430 mph!), and is also extremely hot (up to 1,000 °C!). So not only could the cloud not be outrun, being inside it would not be survivable.

The gyrosphere's fall from the top of the cliff would also probably not be survivable for its occupants and, even if it was, the REALLY HOT pyroclastic cloud from the volcano would still be covering the water log after anyone could hold their breath, so the occupants would die when they surfaced. 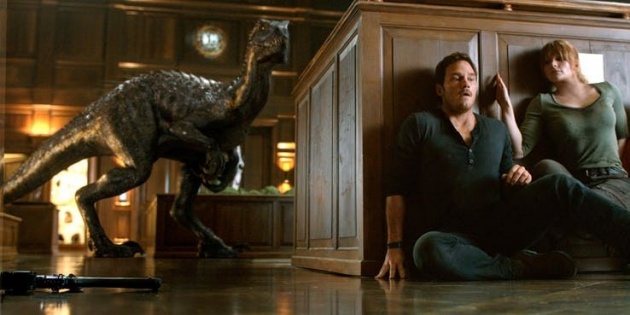 Fallen Kingdom is available in 2D and 3D, with the 2D version being the one watched. Given that the film has a fair amount of CGI - dinosaurs not being available to play themselves and volcanoes not tending to erupt on a schedule, or be safe to be near to when they do - this would probably work fairly well in 3D.

Fallen Kingdom is definitely fantastic to watch and visually spectacular, with some big action scenes - such as a volcanic eruption! - and the dinosaurs are terrific. Most scenes with the dinosaurs can lead you to ignore the problems with the film as a whole. The level of violence is rather tame, with most occurring off screen, probably to avoid a too high certification, and there was one particular scene that suffered as a result. One individual got eaten by a dinosaur, but you got a definite feeling that a piece had been cut from the final film, as one minute he's okay and then you actually have to realise that he no longer is. Okay to dead with no intervening scene. It was a bit jarring.

There are some ethical conundrums, ones that are going to become more relevant as technology advances when regarding such as cloning and what rights cloned beings might have. Fallen Kingdom does attempt to consider these; attempt, because these conundrums are to a large extent lost beneath the action and adventure of the film. Which is a shame really, as these matters are important. The conundrums do become more relevant later in the film, but again this is lost.

There is one scene, which appears to have been deliberately focused on, where a single dinosaur is seen at the edge of the island as it is enveloped by the cloud from the volcano. Even though it was debated as to whether or not dinosaurs had a right to live, and whether or not you actually thought they did, seeing this single dinosaur dying made you think.

Films often need good villains, and sadly this film lacks any. There are two true villains of the piece (not counting the dinosaurs, and only one of those is really a villain), and neither is that great. The primary villain seems a bit laughable and the secondary one is so obviously a bad guy that, even when he's supposedly helping, it always looks as if it's a ploy. Which it probably is. The villains are something else that's lost behind the action.

A Tendency to Get Bigger

One thing Fallen Kingdom definitely does is put an end to the theme park concept - by wiping it off the face of the planet with a volcanic eruption - so future films - and one is already in the works - will probably go down a new route. The Jurassic Park films have started to show a tendency to get bigger; creating more dangerous dinosaurs and having bigger disasters. Which does make you wonder just what they are going to do to top this sort of thing. There is a post-credits scene that may provide a hint, but trying to outdo the previous films may push the franchise into a completely different genre. Jurassic World: Fallen Kingdom, is a big, spectacular film to watch, but story-wise it's not much better than average. 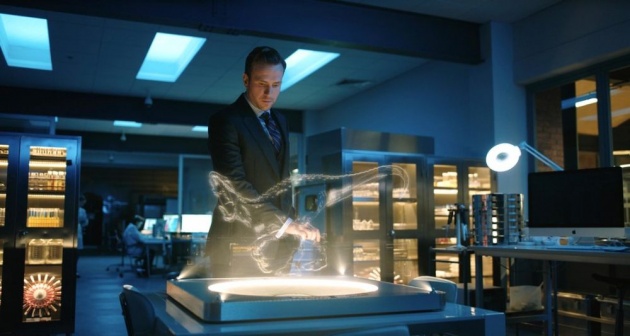 Jurassic World featured the Indominus rex, a dinosaur genetically engineered to be more dangerous. Because 12' tall, 40' long, 8 tonne carnivorous dinosaurs simply aren't scary enough. And it was more dangerous; it's even described in this film as being the dinosaur that destroyed Jurassic World (the theme park). So naturally someone decides that it would be a good idea to make a dinosaur that's EVEN MORE DANGEROUS. It's scary to think that someone might actually be dumb enough to do something like that in real life.