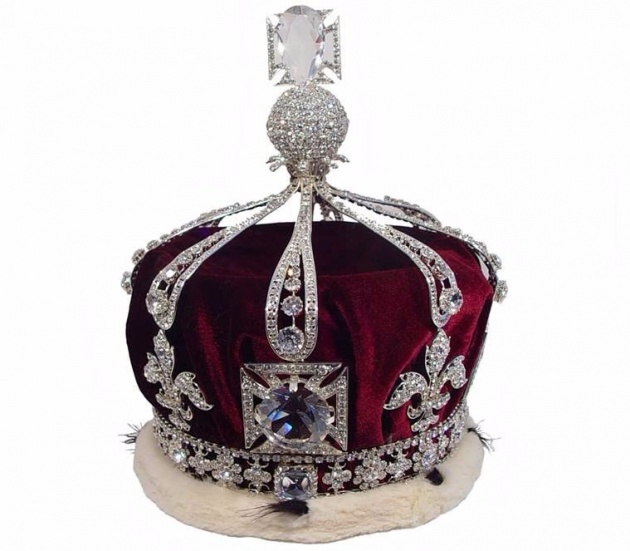 The Koh-i-Noor is one of the oldest, largest and most famous diamonds in the world. The term “Koh-i-Noor” is a Persian word which means “Mountain of Light”. The diamond weighed around 186 carats (37.2 g). It is considered one of the five precious diamonds in the world which was mined in Golconda, India, and owned by India. Later on, it was taken by many invaders in South Asia over the next few hundred years, ending up on the crown of queen Elizabeth of Great Britain after the British conquest of the Punjab in 1849. In the following lines I am going to highlight the salient features and important events in chronological order about this unique and priceless diamond of the world. 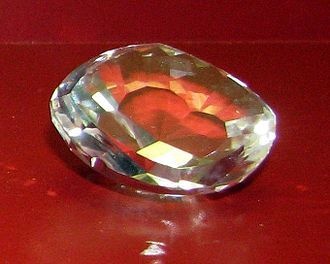 A glass  replica of the diamond before it was re-cut in 1852 on display at the Reich der kristalle museum in Muich, Germany

Origin of the Koh-i-Noor

The history of Koh-i-Noor is very old and interesting. It is said that this diamond dated back to more than 5000 years BC. The diamond was first mentioned in a very ancient Sanskrit script, where it was called the Syamantaka. Devout Hindus claim that it was once worn by the great god Krishna, but was stolen from him as he lay sleeping. It is worth mentioning that there is only speculation that the Syamantaka and the Kohinoor are the same diamond. After this first written mention, for over 4,000 years, there is no mention of this diamond.

Some archaeologists believe that the history of the diamond is less older than it was estimated by some historians. They link the origin of the diamond with the Golconda in Andhra Pradesh (India). It was mined from the Rayalaseema diamond mine when it was under the rule of the Kakatiya dynasty. Allaudin khilji who was one of the rulers of Trukish dynasty of the Delhi Sultanat, attacked the kingdoms of southern India and it is believed that Khiljis came to acquire the diamond in one such expedition at Warangal in 1310. So the stone remained under the possession of khilji dynasty and later on it passed to the coming dynasties. 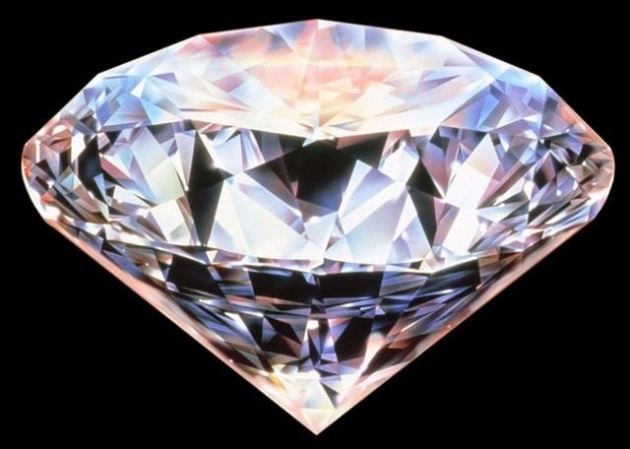 British Took Kohinoor By Force, But So Did The Indians

Acquisition of Koh-i-Noor by Different Leaders

The diamond belonged to various Indian and Persian rulers who fought bitter battles throughout history. From 1304 to 1739, this precious diamond went from one hand to another. In 1304, it remained under the possession of Emperor of Delhi i.e Allaudin Khilji. In 1339, the diamond was taken back to the city of Samarkand, where it stayed for almost 300 years. It is pertinent to mention here that in 1306 in a Hindi writing, a curse is placed on the men who will wear the diamond: “He who owns this diamond will own the world, but will also know all its misfortunes. Only God, or a woman, can wear it with impunity.”

The first document that attests the existence of the Koh-i-Noor dates back to 1526 when the Indian conqueror Babur had it in his possession. He mentioned that the diamond was owned by the Raja of Gwalior in the 13th century. The founder of Mughal dynasty, Babur has mentioned Koh-i-Noor in his famous autobiography i.e. Babur Nama. This precious diamond was valued by Babur as equal to half-day production of costs of the world. He also called the stone the "Diamond of Babur" at that time, although it had been called by other names before it came into his possession. After Babur, his son Emperor Humayun also mentioned about its origin in his memoirs.

After Babur, the diamond went to the hands of Emperor Shah Jahan who was famous for building the Taj Mahal, had the Kohinoor Diamond placed into his ornate Peacock Throne. It is said that Shah Jahan, the ruler who commanded the building of the throne and that of the Taj Mahal was imprisoned by his son and he could only ever see the Taj Mahal again through the reflection of the Koh-i-noor diamond. Aurangzeb who was the sixth Mughal king  protected the diamond diligently and passed it on to his heirs. 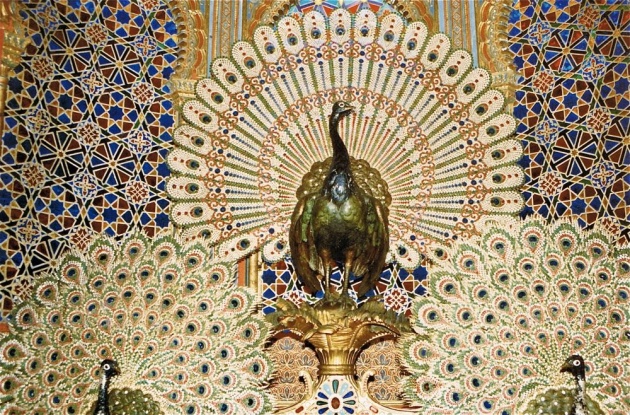 In 1739 Nadir Shah, the Persian king, invaded the Mughal empire and therein obtained the diamond. The army of Nadir Shah looted the Mughal Empire’s treasury and thus  along with Peacock throne, the Shah also carried away the Koh-i-Noor. The Legend has it that it was Nadir Shah who gave the diamond its current name, ‘koh-i-Noor’, which in Persian means "Mountain of Light". Nadir Shah then brought the jewel back with him to Persia. 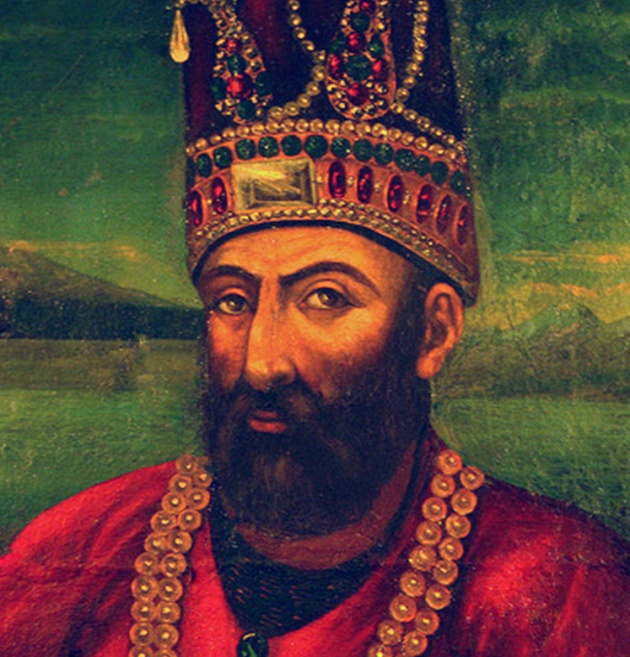 After Nadir Shah's death, the Koh-i-Noor came into the acquisition of one of his generals, Ahmad Shah Durrani. One of his descendants, Shah Shuja Durrani gave the diamond to Ranjit Singh of Punjab, who in return helped Durrani win back the throne of Afghanistan. In 1849, the British conquered Punjab and the Lahore treaty was proclaimed. One term in the treaty stated that:

“The gem called Kohinoor which was taken from Shah Shuja-ul-Malik by Maharaja Ranjit Singh shall be surrendered by the Maharajah of Lahore to the Queen of England”. 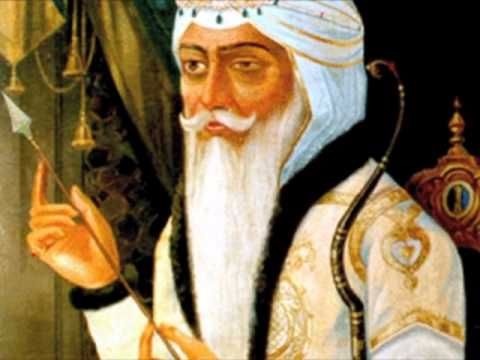 In 1849, after the conquest of the Punjab by the British forces, the properties of the Sikh Empire were confiscated. The Lahore Treaty decided the fate of the Koh-i-Noor and it  was transferred to the treasury of the British East India Company. The diamond was shipped to Britain on a ship. During the process of its shipment, an unfortunate incident took place. It is said that  cholera broke out and supposedly the keeper of the diamond lost it for some days. It was, however, returned to him by his servant after few days. The diamond was handed to Queen Victoria in July 1850. 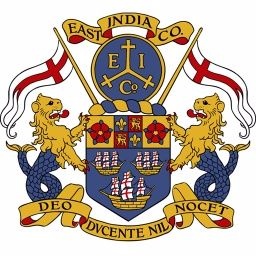 In 1851 a great exhibition was staged at Hyde Park, London. It was displayed in the Works in Precious Metals, Jewellery, etc. part of the South Central Gallery. 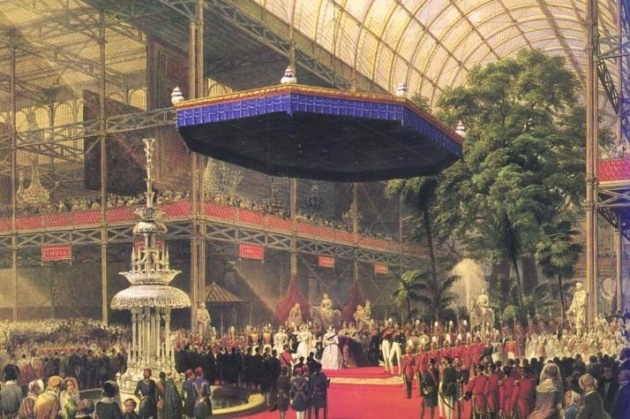 Queen Victoria opening of the Exhibition, inside the Crystal Palace.

Presentation of Diamond to Queen Victoria

Lord Dalhousie functioned as the Governor-General of India from 1848-1856. In 1851, he arranged for the Kohinoor to be presented to Queen Victoria by Duleep Singh, successor of Ranjit Singh. In Hyde Park, London a grand event was organized. The Koh-i-Noor was formally presented to Queen Victoria on 3 July at Buckingham Palace by the deputy chairman of the East India Company. The date was chosen to coincide with the company's 250th anniversary.

Since getting into British hands, the Koh-I-Noor was used by Queen Victoria, Queen Alexandra (wife of King Edward VII), Queen Mary and Queen Elizabeth. As of today, the Koh-I-Noor is on display in the Tower of London with the Crown Jewels. 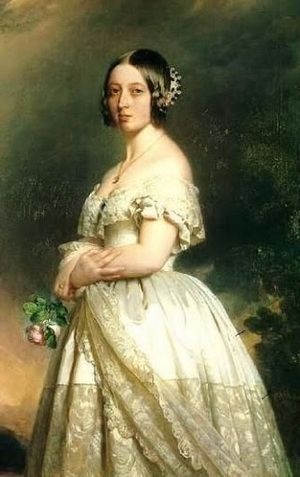 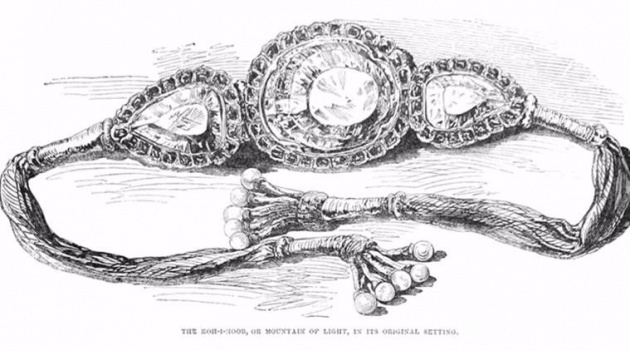 In its original setting as part of the armlet given to Queen Victoria, 1851

Curse of the Koh-i-Noor

There is a very interesting story attributed to the curse of this diamond. The Curse of Kohinoor Diamond dates back to a Hindu text from the time of the first authenticated appearance of the diamond in 1306. The Curse of the Kohinoor Diamond reads: "He who owns this diamond will own the world, but will also know all its misfortunes. Only God, or a woman, can wear it with impunity." And no doubt, the history and lives of the rulers who owned the Koh-i-Noor diamond were filled with violence, murders, mutilations, torture and treachery.

It is pertinent to mention here that the Kohinoor, now owned by the British, has fueled controversy over its rightful ownership.The governments of India, Pakistan, Iran and Afghanistan have all tried to claim ownership of the Koh-i-Noor and demanded its return at various points in recent decades.There is heavy debate over whether the diamond was indeed a gift to the United Kingdom, or an unlawful acquisition. India believe that the Koh-i-Noor was taken away illegally and that it should be given back to India. But, the fact is that the stone's early history has now lost in the mists of time, and the British government insists the gem was obtained legally under the terms of the Treaty of Lahore__a treaty which officially ceded the Koh-i-Noor to Queen Victoria. When Queen Elizabeth II made a state visit to India marking the 50th anniversary of independence in 1997, many Indians in India and Britain demanded the return of the diamond. On 21 February 2013, while visiting India, David Cameron, the UK Prime Minister, said that it would be illogical to return the diamond. Despite claims of ownership by four countries -- India, Pakistan, Afghanistan and Britain -- the United Kingdom has maintained its ownership over the gem.

Rejecting the claim of India, in 2015, British historian Andrew Roberts was quoted as saying: “Those involved in this ludicrous case should recognize that the British Crown Jewels is precisely the right place for the Koh-i-Noor diamond to reside, in grateful recognition for over three centuries of British involvement in India, which led to the modernization, development, protection, agrarian advance, linguistic unification and ultimately the democratization of the sub-continent.” 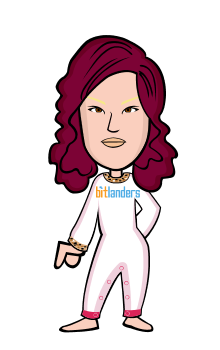 My Diamond and American Diamond

These are my rings; my husband gifted me both; one at the time of marriage and one later. Out of the…

Christmas tree: One of the Main Christmas Tradition

Recap : In my previous blogFOUNDATION OF MUSLIM LEAGUE (part 1). I told U about the Subcontinent's I…