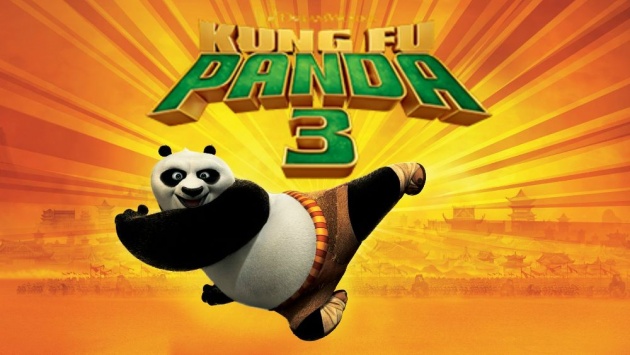 Kung Fu Panda 3  is an American-Chinese 3D animated action movie. It is the third animated adventure movie directed by DreamWorks Animation and Oriental Animation. Kung Fu Panda 3 is an exceptional sequel to 2011 movie 'Kung Fu Panda 2', moreover the third installment in the Kung Fu Panda Franchise. The movie managed to capture the action, humour and exciting story of the first movies. It is directed by Jennifer Yuh Nelson and distributed by 20th Century Fox. The previous two movies have been the best animated action comedy movie released by DreamWorks Animation. The film features the best crew and cast reunited of the second film including the director and an executive producer. It was announced to release the movie on 29th January 2016. Like its predessors, the third chapter recieved the positive reviews from the public and managed to gross over 117$ million.

The Kung Fu Panda 3 has followed the sequel's footsteps and presented the exceptional adventure story. In 2010, CEO of DreamWorks Animation named Jeffrey Katzenberg reported that the Kung Fu Panda series was planned to present its six chapters (movies) on the screen. The production of third sequel was confirmed by DWA's chief creative officer named Bill Damaschke.

Kung Fu Panda 3 is a co-production between Oriental DreamWorks and DreamWorks Animation including several Chinese companies. About 33% of the film was made in China, and the rest in the United States at DWA. This is probably the ever first animated comedy movie co-produced with Chinese company. The third delightful chapter is presented both in English version as well as Chinese version to ensure the success of sequel in the China.

Storyline Of The Third Sequel:

Following with his incredible adventure story, Po must face biggest dangers including supernatural villain and the other somewhat closer to his home. In the latest sequel, the student Po became the Master in his latest adventure. In Kung Fu Panda 1 was Po figuring out how to become a legend (hero) and 2 was him figuring out how to sharpen his abilities, then 3 is Po's adventure to turning into a Master. In the third chapter (directed by Alessandro Carloni and Jennifer Yuh Nelson), Po's departed panda father all of a sudden returns, and the rejoined pair go to the hidden panda town where Po was born. But when a powerful (supernatural) villain named Kai appears with the chi of each kung fu master, Po must prepare his fellow pandas to defeated the powerful enemy. The amazing story managed to present the exciting developments, martial-arts skills and action packed ending and new characters. This is additionally likely the most latest stylized Kung Fu Panda we have ever seen.

Kung Fu Panda 3 reunited the cast and crew of the second film including the producer Melissa Cobb, director Jennifer Yuh Nelson and screenplay writers Glenn Berger and Jonathan Aibel. The third chapter features of voices of well known celebrities such as Angelina Jolie, Jackie Chan, Jack Black, Bryan Cranston, Kate Hudson, David Cross and J.K. Simmons. Jack Black is back as the voice of Po, which is the main heart of soul of The Kung Fu Panda Franchise. He is without any doubt a main character of third installment. While, Dustin Hoffman played a role of Master Shifu and Bryan Cranston, the biological father of Po. Angelina Jolie in addition featured the voice of Master Tigress and Jackie Chan played the character of Master Monkey. The movie in reality is more appreciated because of the phenomenal characters played by these superstars. 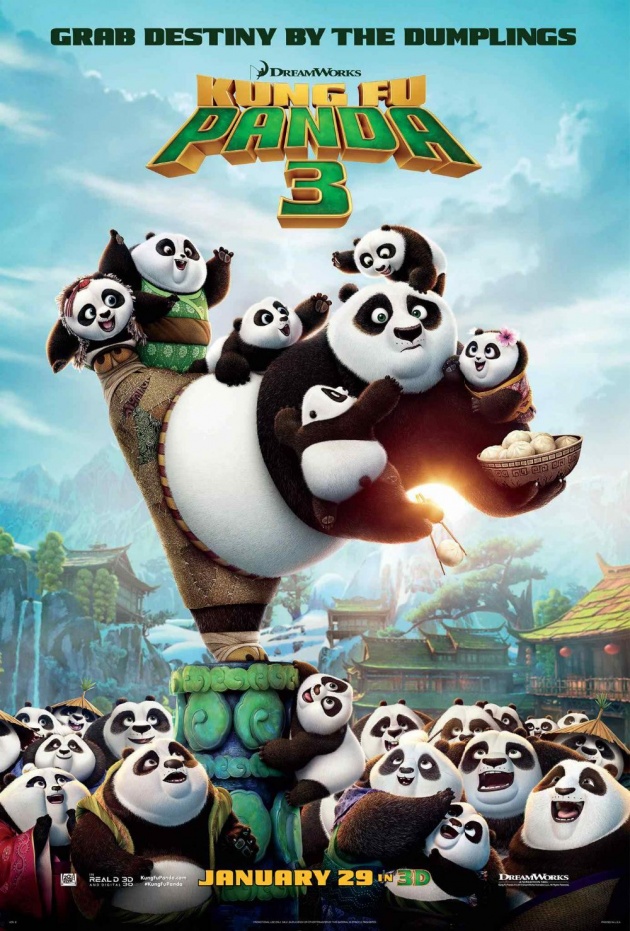 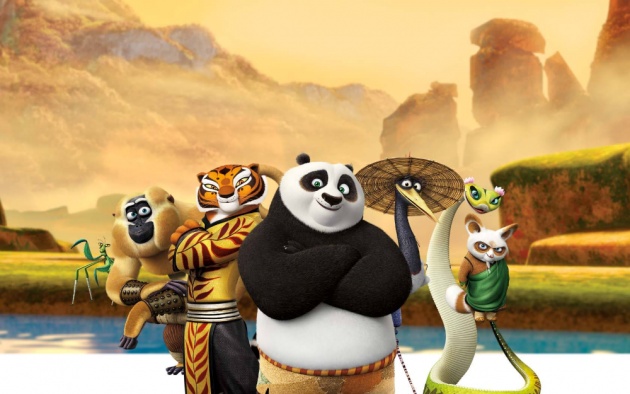 All things considered, there's a great deal of new stuff in this film as well. The superstar voices are again utilized in the third installment, and there's a huge number of new character too in the film. The list of maim characters featuring in Kung Fu Panda 3 are given below:

Master Po is the main hero of the Kung Fu Panda franchise. He is a quick talking panda who was picked as the Dragon Warrior, champion of the Valley of Peace in the first film. In the first film, Po is appeared to be living with his dad Mr. Ping and working at his noodle restaurant, wishing of his existence as a praised kung fu master. In second film, Po figured out to become a hero and saved the world a few times. In the third installment, Po face the different threats, now he must face these diffuculties for turning into the best Kung Fu warrior he can be. 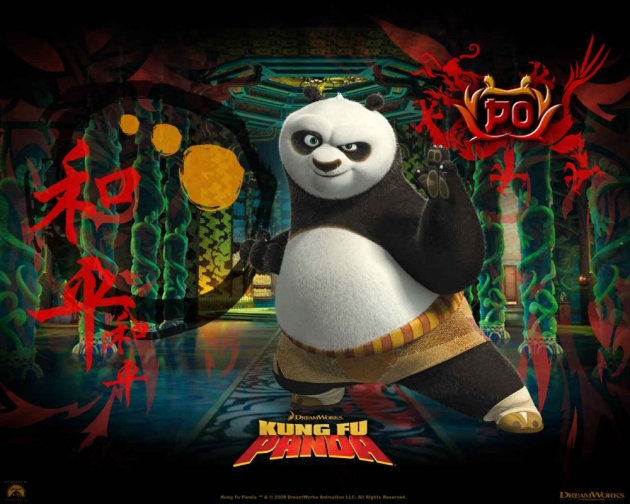 Master Shifu is an intelligent, wise red panda Kung fu master perfect at his job. He is showed to be as the master of Po and Furious five. In the first film, Shifu is all the time appeared to be rude, disappointed, worried or stressed for an unknown reason. However in the second movie, master shifu is showed as relaxed and more better mentor for Po and others. In the third chapter, he announced the retirement from teaching to Po. 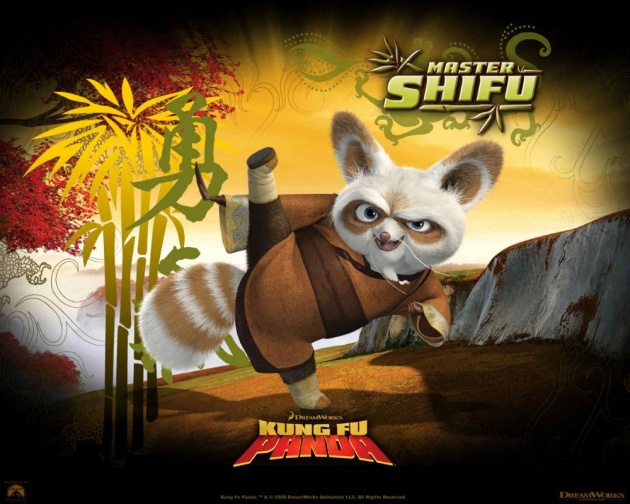 Master Tigress is the most brave, fearless and boldest character of the Furious Five. In the first chapter, Tigress become annoyed at Po when he was selected as the Dragon Warrior rather than her. However, through Po's single remark in Kung Fu Panda 2 that she's so no-nonsense she "can't feel anything", Tigress starts to question how others see her. In Kung Fu Panda 3, Tigress announce the threat of being atacked by the Kai villain and alerted other fellow panda's including Po. 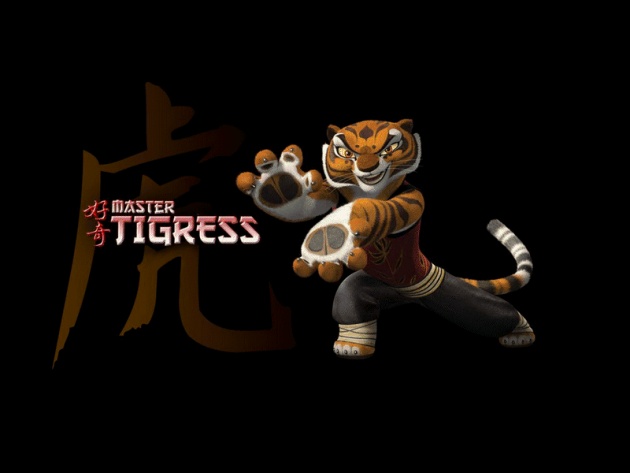 Master Viper is the most humble, kind, charming and sweetest of the Furious Five group. Viper is a green tree snake with two little lotus blossoms on top of her head. She is born with the ultimate nature, beauty, excellence, and accurate skills. In the first film, viper is shown to with her rapidly developed empathy for Po. In Kung Fu Panda 2, Master Viper is appeared to be the most straightforward in her emotions and the most transparently caring character of the film. 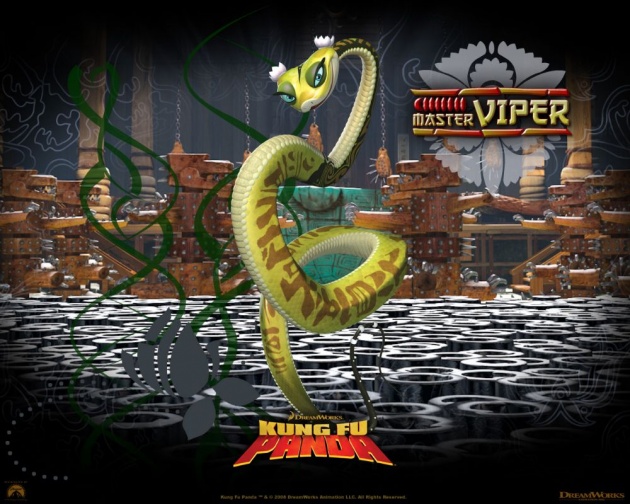 Master Monkey is the brilliant, receptive and most friendliest character of the Furious Five. Monkey was the first of the five to perceive Po's determination and kept his stand with Po throughout the movie. Unlike the others, Master Monkey always have preffered to utilize a weapon in battle. In Kung Fu Panda 2, Monkey keeps on giving a great part of the cleverness. When they break into the jail to free Mastex Croc and Master Ox, he offers to stand watch and make crane voices if the gatekeepers come to the point. In the third sequel, Monkey is shown as injured in the result of Po's training teachings. 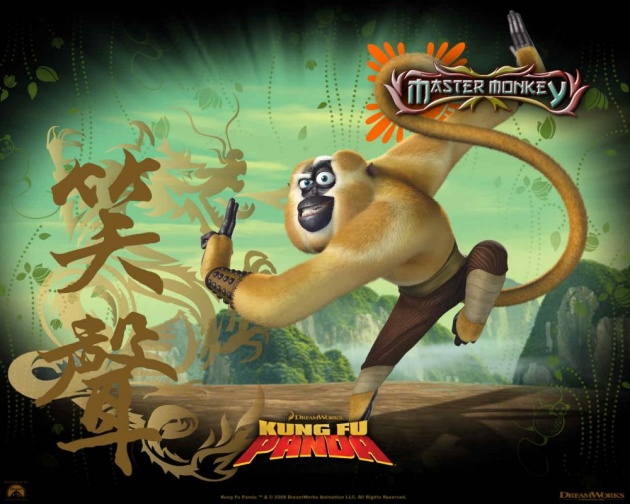 Kai is the main rival of Po shown in the third installment. Once in a battle, Master Oogway was injured while fighting alongside Kai. Kai then took him to Secret Panda Village where the Pandas utilize their knowledge to cure the Master Oogway's injury. Many periods after the incident, Kai fought a battle with Master Oogway. He cautioned the Kai that he had shown Po the way of defeating him. 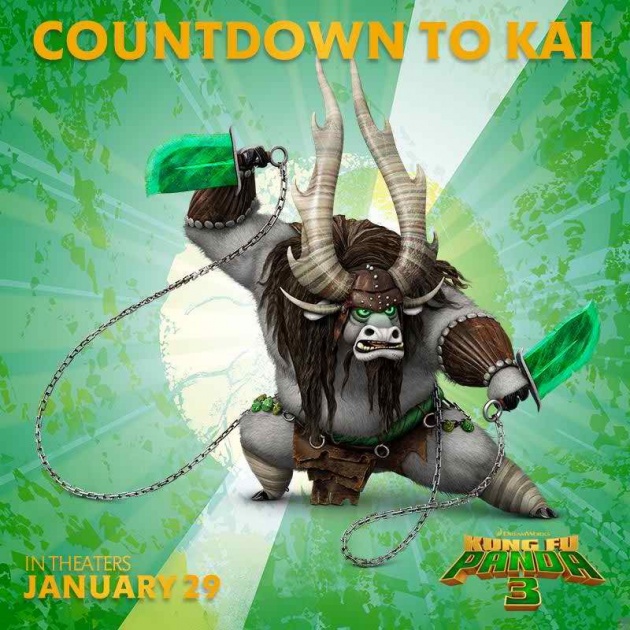 The great musician Hans Zimmer contributed his music in the Kung Fu Panda 3. The come back of Hans Zimmer was announced on July 25, 2014. Famous Chinese (Asian) musicians like Jiang Wang, Lang Lang and Karen Hua-Qi Ottosson also performed and participated for the third time in the score of the third installment. On January 22, 2016, Soundtrack Album was released worldwide. Renown musician band 'The Imagine Dragons' also presented the melodious song 'I'm so sorry' in the film.

Initially the film was set to release on March 18, 2016. After that due to some reasons, the date was changed to Januray 29, 2016. Since the Kung Fu Panda 3 is the animated movie of the co- production between China and United States. It managed to attract the big number of audience and viewers. The movie earned 75.7$ million in its first week, internationally. It is the first ever major animated movie made by mutual collaboration of two countries. By its release in two different versions, the movie topped the Box Office charts. Summing up, Kung Fu Panda recieved much positive reviews from the general public.

Kung Fu Panda 3 is a complete package of fun-filled, finest stylizeda and most adventurous animated action plus comedy film. The movie makers made a new cast additions to Kung Fu Panda 3. Especially, the role of the supernatural villain is fantastic featured by the movie. Supernatural villain is shown for the first time in the Kung Fu Panda franchise. It would not be wrong to say that the third chapter is the best animated comedy film of 2016 till to the date. The movies is full of breathtaking scenes, marvellous actions, suspense filled story, best comedy and martial arts skills. At the end, I would say that this movie so far, is perfect to watch. 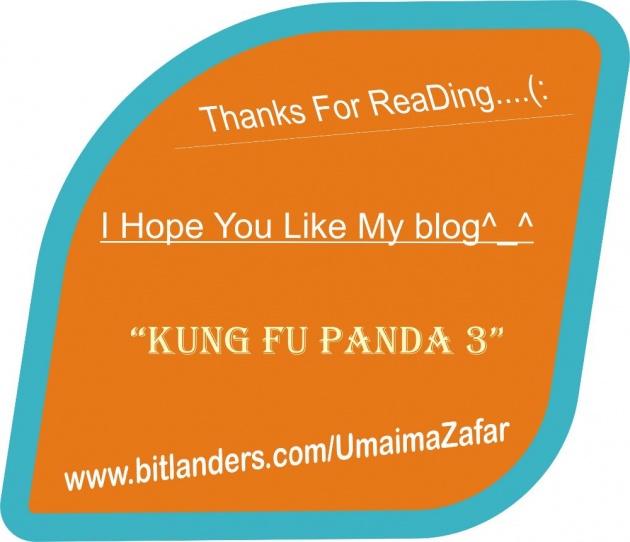